Botulism is a medical condition caused by nerve toxins (neurotoxins) produced by a specific type of bacteria known as Clostridium botulinum. This neurotoxin blocks nerve impulses thereby leading to muscle weakness and paralysis. It is potentially fatal as it can lead to respiratory arrest.

Botulism is therefore always treated as a medical emergency. The nerve damage with botulism is irreversible at times and recover may take long periods of time after the toxin is eliminated from the system. However, this neurotoxin also has medical uses such as wrinkle reduction, eyelid twitching and excessive sweating (hyperhidrosis) at specific areas of the body.

How common is it?

Overall botulism is an uncommon condition. Only about 154 cases are seen every year in the United States. The majority of these cases are seen in babies. The risk of death in infants is usually less than 1%. Botulism can affect any person of any age or gender. With  greater understanding of this form of poisoning, preventative measures have been take to ensure that the incidence of botulism through eating contaminated food has dropped drastically over the past few decades.

The neurotoxin produced by the bacteria Clostridium botulinum, often referred to as the botulinum toxin, enters the bloodstream in several ways. One of the common ways that is more widely known is through food. This type of food poisoning occurs when the toxin absorbs into the bloodstream through the gut wall (mainly the stomach and small intestine). The toxin is not denatured by the potent gastric acid or digestive enzymes. It can then spread via the bloodstream to various sites in the body.

The effect of the botulinum neurotoxin is by blocking nerve impulses. Normally nerve impulses are electrical in nature when running along the course of the nerve. However, for this impulse to move from one nerve to another or from a nerve to a muscle, chemicals are released by the nerve ending. These chemicals are known as neurotransmitters. The electrical impulse that reaches the nerve endings causes the release of these neurotransmitters in the junction between nerves or between the nerve and muscle.

The neurotransmitter chemical then moves across the junction to trigger an impulse in the next nerve or stimulate the muscle to contract. One such neurotransmitter is acetylcholine which is used by cholinergic nerve fibers. The botulinum toxin disrupts acteylcholine activity. It does this either by inhibiting the release of acetylcholine by the nerve endings or binds to acetylcholine thereby preventing its action. Nerve damage is irreversible but regeneration of nerves over long periods can restore function to the affected parts of the body.

There are several different forms of botulism poisoning largely due to the route through which the toxin or bacteria enter the system. The symptoms may sometimes vary in each type of botulism poisoning but the disease mechanism is essentially the same – nerve impulses are blocked leading to muscle weakness and paralysis.

Foodborne botulism (FBB) is caused by eating foods contaminated with the botulinum toxin. In enters the body through the mouth and is absorbed from the gut. This type of botulism poisoning is seen mainly with consuming home-canned foods, both vegetables and meats including fish.

Wound botulism (WB) is a result of Clostridium botulinum infecting a wound and releasing the botulinum toxin at the site. The bacteria tend to enter the wound when it is contaminated with soil or in drugs users injecting black tar heroin.

Infant botulism (IB) occurs in babies when the bacterial spores enter the gut. These spores then germinate, the bacteria grow in the intestines and releases the botulinum toxins. The contaminated source is usually honey.

There may be some variation of symptoms depending on the site where the botulinum toxin enters the body. The early symptoms are often localized to the point of entry but eventually once the toxin disseminates throughout the body via the bloodstream, the symptoms are largely the same in all forms of botulism. The symptoms usually appear between 18 to 36 hours after ingesting contaminated food in both foodborne and infant botulism. The onset of symptoms with wound botulism can vary from hours to days. In all types, the symptoms can appear as early as a few hours after exposure to as many as 10 to 14 days afterwards.

Fever is not typically present in botulism. The symptoms such as muscle weakness, blurred vision and difficulty swallowing/speaking are sometimes mistaken for other neurological disorders like a stroke. However, these similar symptoms in a stroke are typically one-sided (unilateral) compared to being bilateral in botulism. Nausea, vomiting and abdominal cramps are usually not present in wound botulism.

Constipation is one of the first symptoms seen in babies with infant botulism. Other symptoms that may also be present includes :

Botulism is a result of poisoning with the botulinum neurotoxin produced and released by the bacteria Clostridium botulinum. These are several such neurotoxins with botulinum A, B and E being the most common. There are different strains of C. botulinum bacteria and each produce only one type of neurotoxin. Toxins A and B are the most potent. These toxins are released from the bacteria into its surroundings and is therefore known as an exotoxin. Often the food that is consumed has already been contaminated with the toxin and the living bacteria do not have to enter the gut to cause poisoning.

Botulism is not an infection but rather a form of poisoning with a bacterial toxin. It can take small amounts of the toxin to cause botulism. In fact as little as 1 microgram of botulinum toxin can be lethal. The bacteria can survive as spores in soil until it finds the ideal environment (anaerobic conditions) to germinate, multiply and release toxins into the contaminated substance. Botulinum toxin can also be produced by Clostridium butyricum and Clostridium baratii bacteria but human poisoning by these bacteria is rare. Consuming contaminated food is the most common means of botulinum toxin poisoning but it can also enter the bloodstream through the skin. 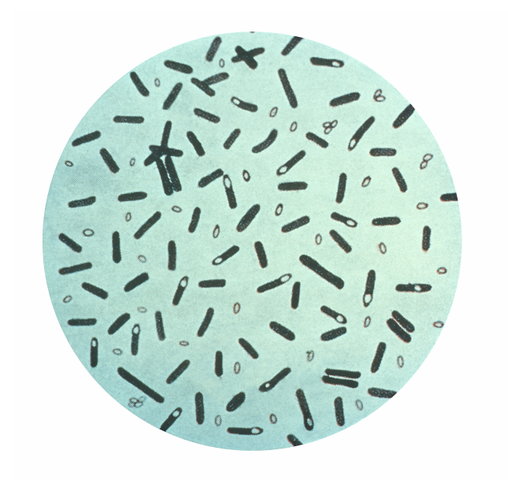 The symptoms of botulism after having eaten foods such as home-canned vegetables or meats and bee honey should raise the suspicion of botulinum toxin poisoning. The only test that can confirm the presence of botulinum toxin in blood, stool, stomach contents (vomitus) or foods is a mouse neutralization assay. Since the results can take a few days, the diagnosis of botulism is often made by the clinical presentation. Electromyography (EMG) may also help with confirmation of the diagnosis but cannot be used as a specific diagnostic tool for botulism.

The treatment for botulism is largely supportive until the toxin is eliminated from the system. Patients need to be hospitalized and must be monitored closely for rapid medical intervention in the event of severe consequences such as respiratory arrest. Breathing assistance by the way of mechanical ventilation may be necessary. With regards to the toxin itself, the following measures may be undertaken :

Long term rehabilitation is necessary in severe cases once the patient recovers from the event.