I am HIV positive, diagnosed just over 3 years ago and I have been having regular tests to check my CD4 count. My doctor told me that I only need to do it once every 6 months but I do it every 3 months and pay for it myself. Twice a year I check my viral load as well.

In the last 3 tests, my CD4 has been dropping slowly (780 to 514) but the viral load is almost the same. The other thing is that sometime my CD4 count may increase by 100 or 150 or drop by 50 to 100 upon consecutive tests. I currently don’t have any symptoms. The odd bout of diarrhea or the cold and sometimes swollen lymph nodes but that is about it.

I am wondering if there could be other causes for my CD4 count dropping other than HIV since my viral load is stable?

This question was posted under the HIV No Symptoms, Swollen Lymph Nodes article.

Any response by the Health Hype team does not constitute a medical consultation and the advice should be viewed purely as a guide. Always consult with your doctor before making any changes to your current treatment program. The information provided in this article is not an authoritative resource on the subject matter and solely intends to guide the reader based on the questions asked and information provided.

The relationship between CD4 cell count (immunological progression) and viral load (virological progression) is not as ‘neat and simple’ as the graph below. It is not uncommon for HIV positive patients to find a slight increase or decrease in their CD4 count  (sometimes up to 100 cells/mm3) and this is not a cause for concern when the CD4 count is above 500 cells/mm3.

If your viral load was also increasing at this time or if the CD4 count showed a steady decline upon subsequent tests , then this would be considered significant and your doctor may consider ART (antiretrovial therapy) although this depends on other factors. As your CD 4 count falls below 500, a fluctuation may be considered significant as ART may be started when your CD4 cell count falls below 350 cells/mm3 (in some countries if it is below 200 cells/mm3).

Changes in your CD4 cell count could be due to other causes but these conditions are uncommon and are usually serious – you would have noticed other signs and symptoms at this point. Since you are HIV-positive, there is no reason to attribute this to another condition but you should speak to your doctor to get further clarity on the matter.

During the asymptomatic period of HIV infection (marked as clinical latency in the graph), there may not be a significant increase in the viral load and this often occurs in the later stages of the disease. 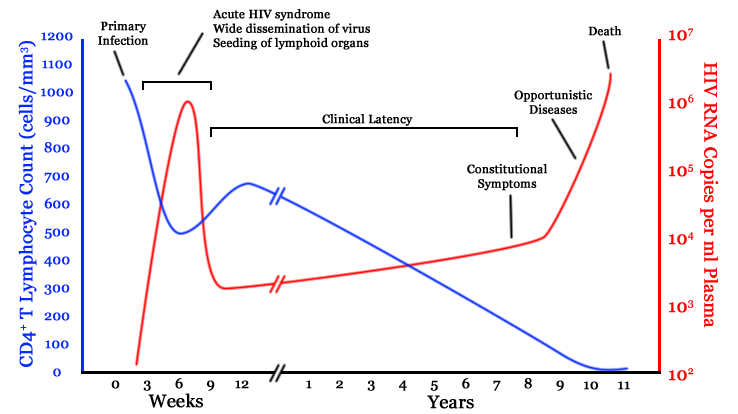