The summer months bring out many tiny insects that feed on human blood and skin. One of these is known as chiggers. It is not as well understood as ticks or mosquitoes but chiggers is a relatively common problem especially for the outdoor explorer. Although chiggers is considered relatively harmless in North America, some Asian species can spread a disease known as scrub typhus. The rash caused by the chiggers bites is often mistaken for mosquitoes or ticks but chiggers is distinctly separate insect.

Chiggers are mites, just like scabies. It belongs to the Arachnid class of insects, the same class as spiders and ticks. Despite being a mite, chiggers is a distinctly different type of mite compared to the scabies mite. Chiggers belong to the Trombiculidae family of mites, varieties of which are found across the globe. It is also known by common names such as harvest mites or red mites. Chiggers is found in forests, parks and gardens, especially in the areas close to water. It adheres to grass and stays on the parts of plants that are close to the ground.

The chiggers mite is so small that it is barely visible with the naked eye. It is about 1/150th of an inch but is more easily seen when many mites clump together. Adult chigger mites are harmless. It is the six-legged immature form of the mites, known as the larvae, that bite humans and animals. The mite has claws which allows it to cling tightly to plants, clothes and skin. Once attached, the mite may travel for a short distance until it finds a suitable area to feed. The mite does not infest human skin for long periods and falls off after a few days. 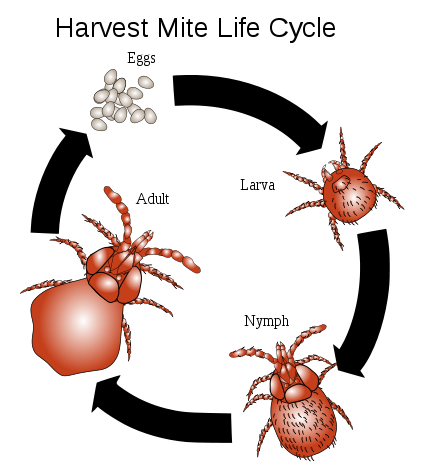 The chiggers mite feeds off human skin cells, and not blood like other insects such as mosquitoes and ticks. The mite first pierces the skin, injects saliva which dissolves the skin cells. It forms a feeding tube known as sylostome which allows it to continue feeding for a while. Unlike scabies, it does not burrow, live or lay eggs within human skin. The mite may migrate around the body until it finds a suitable feeding site. It feeds for a few days and then falls off. The bite marks are the areas where the mite has dissolved skin cells and fed on it.

It prefers to bite and feed on areas where the skin is thin like the folds of the skin. The ankles, knees, armpits groin and areas where there is tight compression (like the waist due to the use of a belt) are some of the preferred sites. When the mite falls off, it typically leaves a red bump on the skin. This is usually itchy and the itching may persist for a few days even after the mite has finished feeding. The bumps (also described as pimples, blisters or hives) usually occurs in groups but resolves completely within about 2 weeks. 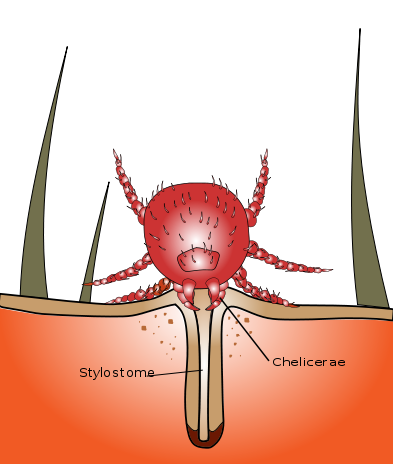 The chiggers rash is made up of many itchy red bumps. There may be some redness of the skin surrounding it, and tends to resemble welts similar to hives. Often the chiggers rash is mistaken for mosquito or tick bites or a rash caused by plants such as poison ivy. The symptoms develop within 1 to 3 hours after the bite. The itching and size of these bumps then increase for a few days.

When the mite bites the skin on the penis, it can cause a condition known as summer penile syndrome. It results in painful or burning urination, itching and swelling of the penis. It is not a sexually transmitted disease as is sometimes thought. Scratching can significantly worsen the chiggers rash by irritating the skin and causing tiny tears. This may then lead to a secondary bacterial infection of the skin. It is mainly staphylococci and streptococci bacteria, many of which naturally live on the skin, that causes this secondary skin infection.

Redness and swelling of the skin with pain and an oozing discharge (pus) are signs of a chiggers rash that has become infected with bacteria. This is a superficial skin infection known as impetigo. However, if the bacteria are able to penetrate deeper into the tissue underneath the skin (subcutaneous tissue) then it can cause a more serious infection known as cellulitis.

Chiggers can be easily managed at home. The mites should be removed if still present on the skin by washing the area vigorously with soap and water. Cold compresses can then be applied on the area to reduce the inflammation. Never apply ice directly on the skin. A cloth soaked in cold water will suffice. When symptoms are more severe then medical treatment may be necessary.

The treatment of chiggers is largely directed at symptomatic relief. Uncomplicated cases can be managed with applying calamine lotion on the site of the chiggers bite. Antihistamines (oral medication) may be used to reduce the itching. Corticosteroid creams can ease the itching, swelling and redness until the skin heals. The chiggers rash heals on its own usually within 2 weeks and no further treatment is necessary. However, if a secondary bacterial infection arises then further measures are required.

Antibiotics are usually necessary for these secondary bacterial infections. An antibiotic cream may suffice for a superficial infection but if it is worsening or has become deep (cellulitis) then oral antibiotics are necessary. The presence of a severe tenderness and pain with a fever and pronounced redness that is spreading usually indicates a very serious infection. This can become life-threatening if left untreated. Severe cases may even require intravenous antibiotics.

The problem is that chiggers cannot be easily eradicated from the environment. It is usually found in forests and grassy parks and play a role in the ecosystem. Instead it should be eradicated from the body and clothing immediately after exposure. Alcohol, bleach and nail polish remover should never be used on the skin as a means of getting rid of the chiggers mites. Many people believe that these chemicals will eradicate the mites that have burrowed deep in the skin. But chiggers does not burrow into the skin. It feeds while on the skin surface.

How to get rid of chiggers?