What is lung consolidation?

Consolidation may be patchy in distribution and involve only certain lobules of the lung although it can be widespread and affect entire lobes of the lung. It may be complete or incomplete. Although the term ‘consolidation’ is often used loosely and associated with pneumonia, it can also occur for various other reasons. Accumulation of pus, edema and even collapse of the lung (atelectasis) may also result in consolidation. The collection of solids and fluid is not isolated to the air spaces and the surrounding lung parenchyma may also be edematous. This affects the lung’s capacity to expand and allow for gas exchange between the air spaces and blood vessels in the lung tissue.

Signs and Symptoms of Consolidation

Some of the more prominent symptoms may be due to the disease process itself. Patients will also report shortness of breath/difficulty breathing (dyspnea) which is dependent on the extent of consolidation, noisy breathing and other abnormal breathing sounds. Pallor or cyanosis may also be present as well as coughing. 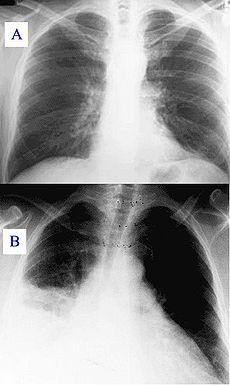 Pneumonia (lobar pneumonia and bronchopnemonia) is the most common cause of pulmonary consolidation. Although pneumonia may be due to a host of causes, consolidation is often seen with infectious pneumonia in the middle to late stages. The radiographic features may vary depending on the type of pathogen responsible for the infection. Read more on pneumonia types and causes.

Other cause of lung consolidation may include :