The lymphatic system is composed of a network of nodes and vessels throughout the body. Its main function is to drain any tissue fluid that did not pass into the bloodstream, filter out debris or invading microorganisms in this fluid and return the fluid, now known as lymph, to the bloodstream. Sometimes large substances like some proteins that are in the tissue spaces cannot pass through the blood vessel wall. It then returns through the lymphatic channels into the bloodstream. Eventually all lymph drains into the venous circulation which carries oxygen-deficient blood to the heart. Sometimes a lymph node or lymphatic vessel may become inflamed and this is known as lymphadenitis and lymphangitis respectively. There are various causes of this inflammation and it disturbs the normal drainage function of the lymphatic system. Tissue fluid therefore cannot be passed back into the bloodstream as is normally the case. The fluid accumulates particularly within the lower limbs and causes swelling of the affected part which is known as lymphedema. If this is permanent and the lymphatic drainage in the area is permanently compromised, a condition known as elephantiasis can develop.

Lymhpatic filariasis occurs when a parasitic worm, known as a nematode, enters the lymphatic system. There are three such worms of significance in human infections – Wuchereria bancrofti, Brugia malayi, or Brugia timori. Of these three, Wuchereria bancrofti is the most common cause accounting for about 90% of lymphatic filariasis cases. The immature form of the worm, known as the larva, is carried by certain species of mosquitoes – Culex, Aedes, and Anopheles species. The larva is the infective form of the nematode worm.

When the mosquito bites a human to feed on the blood, the larvae (plural of larva) are deposited in the skin. It then migrates to the lymphatic system where it resides and grows into the adult worm measuring between 1 to 4 inches in length. This growth is slow and takes on average seven years, although there have been cases where it has taken up to forty years. During this period, however, there are tiny larvae (microfilariae) circulating in the bloodstream. These microfilariae may be ingested by mosquitoes feeding on the infected person and then the mosquito can transmit the disease to another person upon a subsequent feeding. 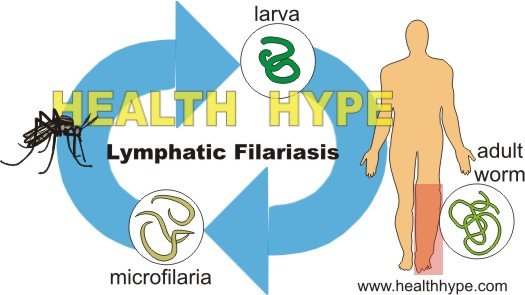 Although several other causes beyond filariasis can cause severe lymphedema, not many may be as severe as a condition known as podoconiosis or be as likely to progress to elephantiasis. Podoconiosis is more frequently seen in Africa (tropical regions) and to a lesser degree in Central America and north-west India. It is an abnormal inflammatory reaction caused by exposure to irritant soil. It is not an infection. There is evidence to suggest that this reaction is determined by genetic factors and therefore not every person exposed to this type of soil will be affected. Contact with the soil is made by walking barefoot and develops over a period of time.

Lymphatic filariasis may be asymptomatic, acute or chronic. It is a complex disease where the exact mechanism is not fully understood. The worm appears to secrete toxins and cause changes in the body’s immune response. Some of these are similar to an allergic reaction that can cause swelling of the lymphatic vessel. This results in dysfunction of lymph drainage beyond the blockage caused by the presence of the worm. There are also certain types of bacteria that infect the parasite and exist with it to cause inflammation in the body.

Elephantiasis is a result of chronic lymphatic filiariasis.  Here the worms secrete toxins that causes excessive dilatation of the lymphatic vessels known as lymphangiectasia. This dilatation leads to permanent dysfunction of the lymphatic vessel and severely disrupts drainage. It is further compounded by the backward flow of lymph. There is excessive accumulation of lymph and tissue fluid which cannot be drained and the affected area swells (lymphedema and hydrocele). The skin then hardens and thickens and the condition is now known as elephantiasis. Parts of the blood flow to the area is compromised by the excessive swelling and some tissue may die and become gangrenous. Bacteria may also infect the skin (secondary infection) further complicating the condition.

In podoconiosis, repeated exposure to the irritant soil causes recurrent or persistent lymphadenitis and lymphangitis. Over time the lymphatics in the area are compromised and the swelling becomes hard and fibrotic. Elephantiasis is seen in the chronic form, which is preceded by acute episodes. The hardening and thickening of the skin combined with the gross swelling of the foot and leg as result of severe lymphedema gives rise to elephantiasis. The disease is almost always limited to the foot and leg and rarely extends above the knee.

Filarial elephantiasis is caused by the parasitic nematode worm which is spread by certain species of mosquitoes. It is further compounded by the presence of rickettsia-like bacteria which infects, but does not destroy, the worm. Podoconiosis is caused by exposure to red clay soil from volcanic deposits on a regular basis as a result of walking barefoot on this type of soil. The reaction to the soil in podoconiosis also appears to due to genetic factors.

Other causes of non-filarial elephantiasis which may only progress to elephantiasis in a minority of cases includes tuberculosis, leishmaniasis, leprosy, sexually transmitted diseases like lymphogranuloma venereum, leprosy and repeated streptococcal infections. These pathogens cause severe lymphatic damage which allows for persistent lymphedema and the subsequent development of elephantiasis. However, these diseases are more likely to affect other organs and cause various other symptoms. The role of these pathogens in developing elephantiasis is not given as much attention as is the case with lymphatic filariasis and podoconiosis to a lesser extent.

Risk factors for filarial and non-filarial elephantiasis varies. Both types are more common in tropical regions within Africa, Central and South America and South and Southeast Asia. Poor mosquito control and an infected population within an area are other risk factors. Poverty or cultural practices that leads to a person to walk barefoot may be another risk factor for developing podoconiosis. Farmers who come into contact with the irritant soil on a regular basis are also more likely to develop podoconiosis within these high risk areas.

Symptoms may vary in lymphatic filariasis and podoconiosis before the development of elephantiasis. Initially there are symptoms of inflammation of the lymph nodes (lymphadenitis), lymphatic vessels (lymphangitis) and swelling due to reduced drainage of lymph (lymphedema). Eventually there is copious fluid accumulation (hydrocele) with massive enlargement of the affect part, and hardening and thickening of the skin.

Lymphatic filariasis is largely asymptomatic in the majority of the cases. In acute stages there is fever, pain and tenderness of the affected area with red streaks on the skin (erythema) corresponding to the inflamed lymphatic channel (refer to picture below). Swelling is also common although in the acute stages this may be temporary. The scrotum may appear swollen and inflamed as the spermatic cord, epididymis and testis are commonly affected in lymphatic filariasis. The lymph nodes within the affected area are also enlarged. The swollen area is usually soft and smooth in the early stages.

In the chronic form there is a gradual and progressive enlargement of the affected area, often most noticeable on the lower limb and scrotum. The scrotum enlarges and becomes massive. The skin over the affected areas becomes thick and rough. Cracks in the skin (fissures) begin to form and bacterial skin infections set in thereby presenting with localized tenderness, pain, heat and at times pus discharge. The swelling continues and becomes permanent.

The early symptoms associated with acute attacks mainly includes burning and itching of the foot and lower leg. The soles of the feet may be swollen and oozing. There may be additional symptoms such as pain in the leg, heat in the affected area and a fever. The scrotum and testis are usually not involved as is the case with lymphatic filariasis.

These symptoms may be persistent although the intensity can vary due to constant contact with the irritant soil. As the condition progresses, other changes develop which precede elephantiasis. The skin becomes thicker and coarser, the toes become rigid often making normal walking difficult and there may be outgrowths of the skin resembling massive warts. Gradually the swelling changes from being soft to hard and rough.

Elephantiasis can be diagnosed based on the findings of a clinical examination. There are several methods to diagnose lymphatic filariasis and differentiate it between non-filarial causes. Blood tests not only help with this differentiation but may be useful in earlier stages before elephantiasis develops. These tests can confirm the presence of filarial worms. Initially a complete blood count may indicate very high levels of eosinophils.

The clinical presentation, medical history and consideration of the geographical location with the absence of a positive test indicating filariasis may be sufficient to diagnose podoconiosis. Furthermore podoconiosis tends to occur in people living in high altitudes (greater than 1,000 meters above sea level) and the scrotum is almost never involved unlike with lymphatic filariasis where scrotal involvement occurs early.

Treatment of elephantiasis involves a combination of medical and surgical measures depending on the severity of the condition. Podoconiosis treatment largely depends on hygiene and avoiding contact with the soil, as well as other conservative measures like compression and elevation of the legs. Eventually surgery may be necessary.

These drugs are used to treat the filariasis by eradicating the parasitic worm.

Antibiotics may be used to treat bacterial cellulitis which arises secondary to massive lymphedema and elephantiasis.

Surgery is aimed at removing excess tissue and certain lymph nodes and draining any fluid accumulation (hydrocele) in the area. It is not curative and if an effective lymphatic drainage cannot be established, the swelling may recur.

Preventative measures to avoid elephantiasis is not only indicated for a person with lymphatic filariasis or podoconiosis but other high risk contacts who may develop these conditions. In terms of lymphatic filariasis prevention in endemic areas, a single dose of DEC may be given to the entire population annually and effective mosquito control measures should be implemented. This reduces the chances of transmission. Appropriate footwear is important for preventing podoconiosis.

In both conditions, proper hygiene and immediate medical attention for bacterial infections of the affected area may help prevent the development of elephantiasis, especially in conjunction with other therapeutic measures. Bandaging the area while it is still a soft swelling and elevating the legs to drain fluid is also helpful in slowing the progression of elephantiasis. Bandaging should only be considered when advised by a medical doctor and needs to be changed and monitored regularly to identify the onset of any secondary bacterial infection. Ultimately therapeutic measures are needed to treat underlying filariasis or other infections.