A finger or digit pulse oximeter is a non-invasive device for measuring the oxygen content of blood, also known as oxygen saturation. It is a highly portable device, which is indispensable for any emergency room or operation theater. Oxygen saturation is a measure of the body’s ability to pump oxygenated blood to all parts. Falling values of oxygen saturation may result from circulatory or respiratory failure and have to be instantly corrected. Inability to do so results in prompt loss of consciousness and even death due to insufficient supply of oxygen to brain. Hence, a finger pulse oximeter is a life-saving device !

A finger pulse oximeter consists of a clothes pin (or clothes peg) like arrangement of a plastic probe, which fits over the finger nail (Picture 1). One of the prongs contains two diodes, one emitting infra-red light and the other emitting red light. When this light passes through the finger tip there it is partially absorbed by the blood passing through the finger tip. The difference between the amount of red and infra-red light absorbed is related to the content of oxygen in the blood. 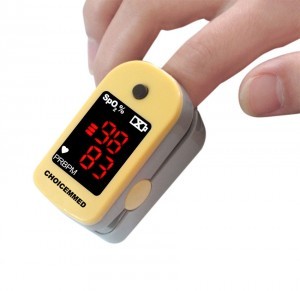 A microprocessor present in the device conducts these calculations and presents us with the value of the oxygen saturation, which is shown on the LED indicator. Normal values of oxygen saturation are 95-100%, but a drop till 90% is tolerable. A drop below 90% has to be aggressively managed with intubation and artificial ventilation with an Ambu bag to prevent brain damage and death.

Why is it called Finger Pulse Oximeter? 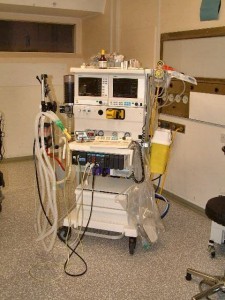