All too often we refer to the abdomen as a stomach but this is incorrect. The stomach is a specific organ that lies in the upper left quadrant of the abdomen, mostly tucked under the left rib cage. The stomach can contain as much as 750mL (about 25oz) of digestive juice excluding the fluid that is consumed. Too much fluid in the stomach could distend it but the stomach is able to quickly push out this fluid to prevent abnormally excessive stretching. The abdominal cavity on the other hand contains very little fluid and sometimes almost none. When there is excessive fluid in the abdomen (sometimes referred to as fluid in the stomach) then this condition is known as ascites.

Source of Fluid in Abdomen

Ascitic fluid is not simply the peritoneum secreting more fluid than normal. While this may be a factor to some extent, the excessive fluid in the intraperitoneal cavity arises from the tissue spaces and blood vessels. The fluid from here leaks into the cavity. Ascites indicates some imbalance in the water and electrolyte levels, usually an excess of sodium and water. When there is fluid accumulation throughout the body then it is known as anasarca. It also occurs for most of the same reasons as ascites. 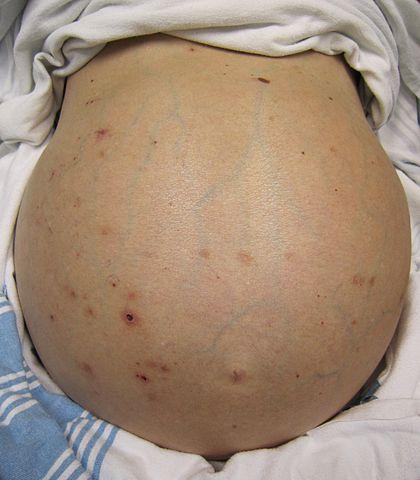 How much of fluid causes bloating?

As mentioned women have more peritoneal fluid than men under normal conditions and this volume is linked to the menstrual cycle. Fluid accumulation within the abdominal cavity usually does not cause symptoms if it is less than 500mL. Sometimes very mild symptoms ma be present at most and may be ignored. In fact the excess fluid below this volume often goes unnoticed and is undetectable. It is only once the fluid volume reaches the 500mL mark that it can be detected but only by ultrasound. This is very mild ascites which is classified as grade 1.

Once the volume reaches around 1,500 mL then it may be visible as abdominal distension.  Sometimes a slightly lower volume causes visible distention in thin people while a larger volume may need to be present for it to be visibly evident in obese people. Grade 2 ascites is considered to be moderate. There is symmetrical distension of the abdomen but it is moderate. With grade 3 ascites the distension is severe and the umbilicus may even be everted.

Cirrhosis is the end-stage liver disease where there is widespread scarring of the liver. It arises with chronic and severe liver diseases, including hepatitis, non-alcoholic fatty liver disease and alcohol abuse. The ascites is accompanied by fluid accumulation elsewhere in the body including peripheral edema (swelling of the legs) and pleural effusion (fluid around the lungs). Ascites can persist for long periods of time in cirrhosis but is usually seen in the latter part of the disease.

Cancers of the abdominal organs and particularly of the stomach, colon, pancreas and liver are the most common causes of ascites due to malignancy. However, ascites can occur with other malignancies, including cancer of the ovaries, Hodgkin’s and non-Hodgkin’s lymphoma as well as metastatic carcinoma in the abdominal cavity. Sometimes other conditions may be present with cancer. These conditions may be the cause of the ascites and not the malignancy itself.

The treatment to reduce the bloating (abdominal distension) caused by fluid accumulation includes dietary changes, drugs and invasive procedures. The choice of treatment depends on the grade of ascites, general health status of the patient and the underlying cause of ascites.

Salt restriction to less than 2g of salt per day (less than 90mmol/L) can be helpful but only when ascites is caused by conditions like cirrhosis. It is of little use for ascites caused by malignancy.

Diuretics (“water pills”) is the main drug used for ascites as it promotes fluid loss through urine. It should be combined with a salt-restricted diet in patients with cirrhosis. The diuretics that may be used includes:

Warning: Diuretics should be used exactly as prescribed. High doses can cause low blood sodium levels and dehydration. Other substances with diuretic action like alcohol cannot be used for the treatment of ascites or fluid retention elsewhere in the body.