What is Graves disease?

In Grave’s disease, the autoantibodies known as thyroid-stimulating immunoglobulins (TSIs) and specifically the thyrotropin-receptor antibody (TRAb) mimic the action of thyroid stimulating hormone (TSH). Other related immunoglobulins seem to have little effect in thyroid gland activity.

Since these autoantibodies are not regulated in the way TSH is by TRH, the continuous stimulation of the thyroid gland leads to an excess of thyroid hormones. Furthermore, TSIs are long acting, stimulating the thyroid gland for up to 12 hours whereas TSH are short acting only stimulating the gland for an hour or so. These antibodies are formed by activated B-lymptocytes which are immune cells that are meant to protect the body from invading pathogens.

Graves disease appears to be a combination of genetic and environmental factors although the exact cause is unknown. It is believed that a viral infection may trigger the development of the thyroid-stimulating immunoglobulins (TSIs) as a result of genetic susceptibility. These genes code for the autoantibodies and it is possible that it may be activated by other mechanisms that are unrelated to a preceding infection. It may also be possible that the similarity of the viral antigen to the thyrotropin receptor leads to the antibodies incorrectly attaching to the receptor.

Signs and Symptoms of Graves Disease

The clinical features are similar to that of hypothyroidism as discussed under signs and symptoms of thyroid overactivity. Briefly this includes :

A characteristic set of eye signs and symptoms known as Graves’ opthamology is an important consideration in the clinical assessment. These features typically include :

Patients with Graves’ opthamology are said to have a startled look and complain of the sensation of having “sand” in the eyes.  The widening of the space between the eyelids due to swelling and protrusion of the eyeball does not allow for the eye to be fully shielded during blinking and sleeping. As a result the tip of the eyeball is dry despite the excessive tearing seen with Graves’ opthamology. 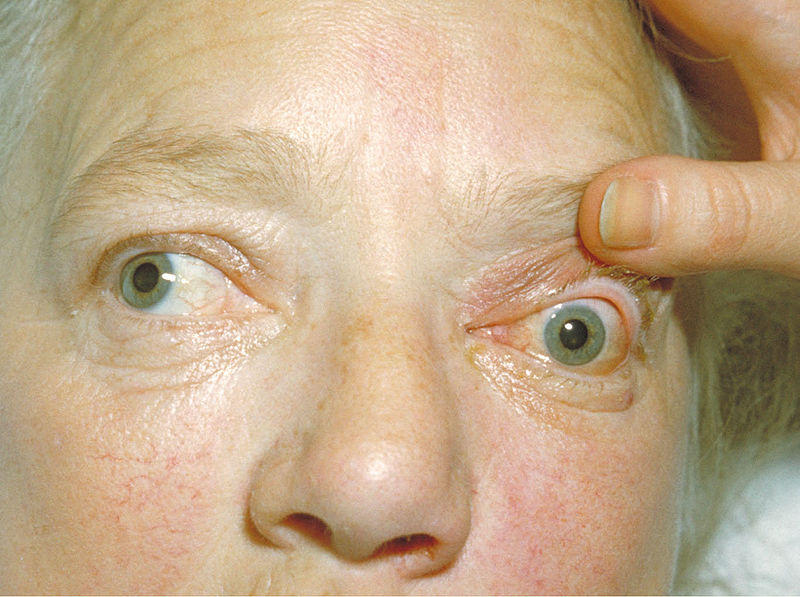