Histoplasmosis is a fungal infection of the lung, which may spread throughout the body via the bloodstream, after inhaling the spores of the fungus Histoplasma capsulatum. Most people who come in contact with the spores do not contract the infection unless they have a weakened immune system or if they are exposed to large quantities of the fungal spores. People who live in endemic areas for histoplasmosis are more likely to be infected. Due to its predilection to mainly affect immunocompromised patients, it is considered as an AIDS-defining illness. Severe cases that are left untreated can be fatal.

What Happens in Histoplasmosis?

Histoplasma capsulatum is a mold that is found in soil in certain areas. It found in larger quantities in soil or even other material that is contaminated with bat and bird droppings. If the soil particles become airborne, the mold can then be inhaled. Due to the warmer temperature in the body, it changes to an yeast form specifically within cells. It is the macrophages, a type of immune cells that consumes invading microbes, where this conversion into the yeast form tends to occur. The yeast then replicates within the macrophages as it is able to withstand the strong enzymes within these immune cells.

Eventually the immune system develops the necessary defenses to prevent this type of growth. Chemical substances that have the ability to act against these fungi spread throughout the system. Within weeks the body the body neutralizes the yeast activity and the healing process begins. Most people who do contract the infection are asymptomatic. In most cases the infection is restricted to the lungs and clumps of immune cells known as granulomas may develop in the lung tissue. However, the infection can spread through the bloodstream or lymphatic system to disseminate through the body.

This is the form of histoplasmosis when a person is first exposed to the fungus. Almost 9 out of 10 patients will not exhibit any symptoms. Those who do display symptoms may experience mild flu-like symptoms such as :

Patients who are immunocompetent may recover from this form within a few weeks.

Chronic pulmonary histoplasmosis is the form that may continue in mainly older people and patients who have underlying lung disease.There is significant lung inflammation and tissue damage in the apex of the lungs with formation of cavitations.

This form is mainly seen in immunocompromised patients. HIV infected individuals and especially AIDS patients are at the greatest risk. It is usually subacute or chronic. Progressive disseminated histoplasmosis is a consequence of the fungi spreading beyond the lung either through the lymphatic system or bloodstream. The symptoms may vary among patients depending on which systems in the body are affected by histoplasmosis. In addition to some of the symptoms of acute or chronic pulmonary histoplasmosis, patient with the progressive disseminated form may also present with:

Other symptoms present depends on the extent of the affected organ or system.

Histoplasmosis is caused by the fungus Histoplasma capsulatum. The fungi tends to thrive in soil that is damp and acidic with a high organic content to sustain it. Therefore these fungi are endemic in certain regions where the conditions are optimal for its survival. Histoplasma capsulatum can in the ideal soil for years in its mycelial form.The soil has usually been contaminated with bat or bird droppings. Birds are not prone to infection but bird droppings in the soil provide the optimum medium for fungal growth. On the other hand, bats can be infected with histoplasmosis are able to spread the fungi through its excreta.

Infection arises when the spores in the contaminated soil is inhaled. Contact with the soil does not mean a person will be infected with histoplasmosis. There are several factors that increases the likelihood of infection. People who live in endemic areas have repeated exposure to the soil. A large inoculation dose is also necessary and once again residents within the endemic areas are more likely to be at risk. Another important factor for histoplasmosis is a person’s immune status. Histoplasmosis is more likely to occur in immunocompromised patients and those with pre-existing lung disease or other debilitating illness that can compromise immune defenses.

Various tests need to be conducted to diagnose histoplasmosis. A biopsy may be conducted to recover a tissue sample from the lung, liver, bone marrow or skin. The tissue damage and presence of the fungi can be confirmed. Along with blood, urine and sputum samples, the fungus can be cultured in a laboratory. There are also tests to either detect the antibodies that the body produces against the fungi or the fungal proteins within the blood or urine. Further investigations such as a chest x-ray, CT scan and lumbar puncture helps with assessing the extent of the infection and damage that occurs in histoplasmosis. 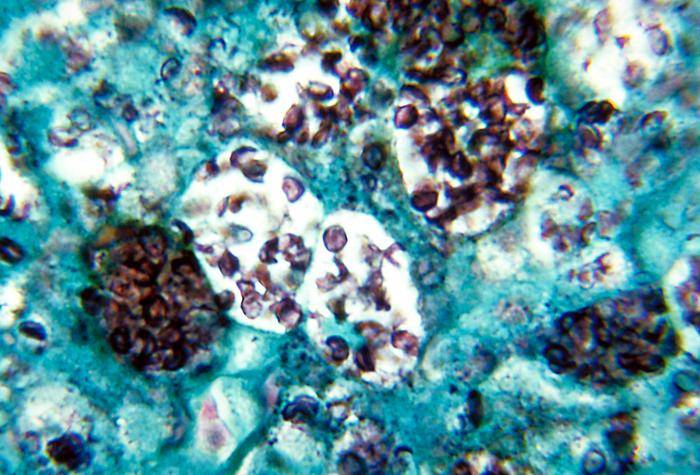 In mild cases which resolves on its own, no treatment may be necessary. Most patients who develop histoplasmosis never know about the infection as they remain asymptomatic or the symptoms are so mild and non-specific that it is not investigated further since it resolves on its own. Infections that persist and progress to chronic pulmonary histoplasmosis or progressive disseminated histoplasmosis, treatment is necessary. Similarly patients who are known to be immunocompromised like HIV infected and AIDS patients should receive treatment as soon as the condition is diagnosed.

Histoplasmosis is treated with antifungal drugs. It is reserved for severe acute cases, chronic and disseminated histoplasmosis. Azole drugs are the preferred antifungal drugs for histoplasmosis. Itraconazole and ketoconazole are more frequently used but fluconazole and other azole drugs may also be prescribed if necessary. Some patients do not tolerate azoles well or may have severe infections that need more aggressive treatment. In these cases amphotericin B is used for treating histoplasmosis. Depending on the severity of infection, the patient’s response to treatment and immune defenses, treatment may continue for 3 to 12 months.