House flies are such a common insect that it is considered part of everyday life for humans. Most of us see it as just an irritation, buzzing around and trying to feed on any food it can access within the home but flies can also transmit diseases. In fact many common infections are transmitted by house flies. Some diseases are very serious and even potentially deadly. Although it can never be eradicated entirely, reducing fly populations and limiting its contact with food in particular is an important part of hygiene.

Life Cycle of the House Fly

It is important to understand the life cycle of the house fly (Musca domestica) in order to prevent disease transmission. Most of us think of maggots (one stage the house fly’s life cycle) as being more filthy than the adult fly. However, it is the adult fly that is more likely to spread diseases by its feeding habits and movement patterns.

Temperature is a major factor in the fly’s life cycle and this entire process can take between 6 to 42 days depending on environmental temperature. A fly lives for about 2 to 3 weeks, and in cooler temperatures it can survive for up to 3 months. 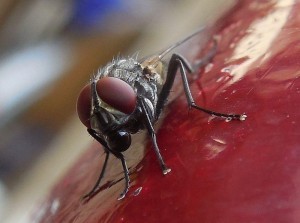 House flies mainly spread infectious diseases. These are diseases caused by viruses, bacteria, protozoa and even nematodes (worms like the roundworm or threadworm). There are over 100 pathogens (disease-causing organisms) that are associated with house flies. Unlike other insects, such as mosquitoes or ticks, these pathogens do not specifically require an insect vector. The house fly plays no specific role in the life cycle of these pathogens. The fly is simply a carrier in some instances.

It is evident that flies can spread many infectious diseases indiscriminately. Fortunately, these diseases are not frequently spread by flies. Other routes are usually more common and effective for transmission.

How do flies spread disease?

The house fly is able to spread disease through several routes. It does not bite like the horse fly or tsetse fly in order to inject the pathogen into a person. Instead disease-causing agents are spread on its body, in its mouth parts or through its vomitus and feces. House flies feed indiscriminately on a wide range of organic matter, from feces to food (fruits, vegetables and meat). It is through this contact with the item it is feeding upon and even direct contact with people that disease-causing agents are acquired and passed on.

The infective dose for each pathogen varies greatly. Sometimes just a few microbes are required to cause serious disease. The contaminated matter containing these microbes, and even just the microbes itself, that are acquired from one source may adhere to the fly or be passed out in its vomitus and feces. The contaminated matter and microbes are then passed onto food once the fly lands and/or feeds on it. The situation is further exacerbated if the food is not refrigerated allowing the inoculation dose of microbes to multiply before the food is eaten.

Extensive measures to control fly populations does not seem like a concern for the average urban dweller in a developed nation. However, it is important to do so even though strong insecticides for mass spraying, dumping toxic materials in potential breeding sites and widespread distribution of fly traps are not usually necessary.  Simple measures in the home front can prevent flies from causing serious diseases. According to the World Health Organization (WHO), four strategies should be implemented:

Although sewage is not a problem for urban dwellers in developed nations, animal feces (dung) can still be an issue, especially with livestock. Pet excrement that is not properly disposed of can serve as breeding sites and attract flies. It may not always be possible to clean out all remnants of pet feces, especially in a carpeted home. Regular washing of the carpets and use of domestic insecticides over the area can help significantly.

The same applies for organic matter that is not discarded by the proper channels. Garbage disposal units have played a significant role in preventing fruit, vegetable and food leftovers from posing a threat in regular rubbish bins. When not available, organic matter should be sealed tightly in rubbish bags before disposing. Compost heaps in the garden, especially where manure is used, can also serve as another attraction source and breeding site for flies. If so, alternatives should be found.

A houseful only needs a few seconds to make contact with a source of pathogens in order for it to transport it elsewhere. Feces is one of the substances that are laden with a wide range of microbes, especially if it was passed from a person who was ill. Modern toilets have eliminated this risk to a large degree in developed nations. However, soiled baby diapers are still a risk if not discarded properly.

Older people who are debilitated, like the infirm, may also be a source and caregivers need to ensure that any excreta is cleaned as soon as possible. Adult diapers may be useful in this regard but it has to be disposed of accordingly. Open wounds and sores and infected eyes can also serve as another source.

Animal slaughter may pose another problem, particularly in areas where hunting is a common practice. Quick slaughtering and discarding the remnants appropriately, like burying entrails, can reduce this risk.

House flies cannot be completely eradicated. Even the best efforts in the home will be reduce fly populations but it can quickly return. In order to prevent diseases, the fly’s contact with people, food and eating utensils should therefore be prevented or interrupted. Self-closing doors and nets/screens over doors and windows are very effective in preventing flies from entering the home.

Even electric fans blowing air over a doorway can impede flies from entering the home. When these measures are unable to stop flies entirely, then aerosol sprays and fly traps may be alternatives. The insecticide sprays kills some flies and repel others. Traps will attract flies more so than food in the home and eventually kill them.