Although rabies has posed a threat to animals and humans for centuries, the development of a vaccine in 1885 has greatly reduced the threat of human rabies especially in recent times. There are only about 2 to 3 cases of human rabies in the United States every year. However, popular media has ignited a fear that the rabies virus, or a hybrid with another common virus like the flu, may lead to a global pandemic. These fears are largely unfounded but should not detract from the fact that rabies is a deadly infection.

Rabies is a viral infection that affects the central nervous system. It is spread through the saliva of infected animals. While rabies can affect any mammal, it is more likely to occur in certain animals such a bats, dogs and raccoons. Human rabies is rare. Rabies shots are only necessary for high risk groups or for people immediately after being bitten by a rabid animal or by an animal suspected of being rabid.

Once the rabies virus enters the body, it spreads along the nerves and multiplies. The virus primarily affects the central nervous system (brain and spinal cord) but after spreading throughout the CNS the virus travels to the salivary glands. This is the reason why the virus is so easily spread through exposure to saliva as compared to other body fluids. However, it is important to remember that the virus may be found in any organ within the body.

The rabies virus is a bullet-shaped RNA virus. It belongs to the branch of viruses (genus) known as Lyssavirus, which is turn is part of the family of viruses known as Rhabdoviridae. There are more than 80 species of Lyssavirus and about 10 viruses in the rabies serogroup, including the Mokola virus, Duvenhage virus, European bat virus type 1 and 2, and the Australian bat virus. 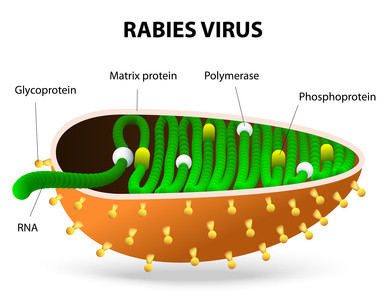 Although any mammal can be affected with the rabies virus, it is more commonly carried and transmitted by these domestic and wild animals:

How is rabies transmitted?

The rabies virus is transmitted through contact with the saliva of an infected animal. This most often happens though bites but rabies can be can also be spread from one mammal to another even without a bite. Any scratch or wound that is exposed to the infected saliva can allow for the virus to be spread. Similarly rabies can also be transmitted if the saliva comes into contact with mucous membranes like the outer surface of the eye. Aerosolized saliva can also transmit virus.

However, these non-bite routes are rare methods of transmission of rabies.

Making contact with the blood, feces or urine of an infected animal or petting the animal is unlikely to spread the virus. There has been documented cases of transmission of rabies among humans through the transplantation of organs. It is possible that human-to-human transmission of rabies could occur if an infected person bites another person. However, there have been no documented cases of this having ever occurred.

The first signs and symptoms develop after an incubation period of around 20 to 90 days. It can be longer but is usually less than 1 year and on average around 60 days. During the asymptomatic period the virus replicates and the infection spreads within the body. In rare instances the incubation period could extend for year and possibly even decades.

The first signs and symptoms are non-specific and typical of most viral infections. It includes:

These symptoms can last for days and then acute neurologic symptoms typical of rabies become evident.

Once these symptoms develop the disease is almost always fatal. Typical rabies symptoms include:

This typical presentation of rabies is known as the furious form. However, there is another form known as paralytic rabies or dumb rabies. It occurs in about 20% of rabies patients. In paralytics rabies a person is not anxious, agitated or confused and does not thrash around and bite with aggression. There is paralysis with prominent headaches and fever.

A person may slip into a coma around 10 days after the symptoms start. The duration of this coma can vary from one person to another. It eventually leads to cardiorespiratory failure resulting in death.

There is no cure for rabies therefore it is important to prevent the virus from spreading after a bite. This can be one through vaccines that are administered to humans after a bite by an infected animals. Since it is not always known whether the animal is infected with rabies, the decision to commence with treatment depends on case by case basis. It is important to bear in mind that untreated rabies is fatal in humans although survival is possible in a small minority of cases.

The decision to institute treatment may be determined as follows:

Human immunization for preventing rabies before a bite occurs (pre-exposure prophylaxis) is usually recommended for high risk groups like veterinarians, veterinary students, people who are frequently exposed to wild animals and relevant laboratory workers. These rabies shots are not part of routine human immunization programs since human rabies infection is so rare. However, domestic animals need to be immunized.

Once a bite occurs then immunization (post-exposure prophylaxis/PEP) needs to be instituted but only if symptoms are not present. This includes a combination of rabies vaccines and immunoglobulin. Vaccines work by helping the body develop immune defenses against the virus by exposing the body to viral particles. Immunoglobulins are not the same as vaccines but work by directing the immune system against the virus.