How does hypertension medication work? 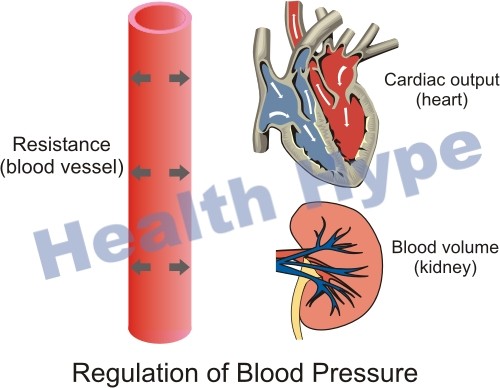 The cardiac output in turn depends on heart rate, force of contraction of heart, and amount of blood returning to heart through veins. The drugs that reduce any of these factors in a significant way is expected to have prominent antihypertensive effect. The primary purpose of treating hypertension is to reduce the cardiovascular risk. Effective antihypertensive therapy has been found to markedly reduce the risk of stroke, heart failure, and renal insufficiency due to hypertension.

The hypertension drugs can be grouped into four broad categories based on the prominent mechanism of action.

Diuretics are drugs that increase the urine output thereby reducing the sodium and water levels in the body. This reduces the blood volume and hence the cardiac output and the peripheral resistance which ultimately helps in reducing the blood pressure. Other unclear mechanisms involving peripheral vascular resistance are also believed to be involved in the sustained antihypertensive action of diuretics like thiazides.

Diuretics can effectively lower blood pressure by 10 to 15 mm Hg in most patients. Diuretics alone can provide adequate treatment for mild or moderate primary hypertension. In severe hypertension, diuretics may be used in combination with other antihypertensive drugs. It is best combined with adrenergic blocking drugs or vasodilator drugs. Diuretic therapy for hypertension is inexpensive and used to be the first line until a few years back. Currently the diuretics are more of a second-line drug but still a major component of combination therapy.

The important diuretics used in treatment of hypertension are :