The placenta is the structure that connects the fetus to the uterine wall and is the conduit for nutrition and oxygen to reach the growing fetus. Essentially the placenta is the communication point between the mother’s blood circulation and that of the developing fetus.

Formation of the Human Placenta

Trophoblastic cells on the surface of the ovum secretes proteolytic enzymes that digest the endometrial cells lining the uterine wall creating a suitable surface for implantation. Trophoblastic cords then extend from the surface of the fertilized ovum to attach to the endometrial lining. Blood vessels grow into these trophblastic cords that further develop as projections into the endometrial lining known as placenta villi or chorionic villi. Eventually these blood vessels in the placenta villi lie close to the blood sinuses around the mother’s blood vessels. The blood circulation of the mother and fetus now have a contact area to exchange nutrients, gases and waste products.

Blood from the endometrial arteries (spiral arteries) circulate around these placenta villi and exchange of nutrients and gases occur through the intervillous space. Blood carried by this villi is returned to the fetus through the umbilical vein. In this way, the fetal and maternal blood never actually mix.

Functions of the Human Placenta

The placenta has multiple functions all of which develop and sustain the fetus. These functions include :

An infection of the placenta is known as chorioamnionitis. This term actually describes an infection of the chorion, amnion, amniotic fluid and/or placenta. It is also known as an intra-amniotic infection. An infected placenta can jeopardize the pregnancy and even the health of the mother.

An infection in the placenta can develop when bacteria enter through the birth canal (ascending infection) or by reaching the placenta through the mother’s blood stream (hematogenous). Most ascending infections are due bacteria although other pathogens may be involved, especially in hematogenous infections. The amniotic fluid may become cloudy and purulent with infiltration by leukocytes. This causes swelling of the tissue (villitis) and vascular congestion.

The infection can lead to preterm labor and premature rupture of membranes (PROM). Other complications in the fetus may include a lower apgar score (< 3) upon delivery, sepsis, respiratory tract infections like pneumonia, meningitis, cerebral palsy, seizures and even death. The complications for the mother may include bacteremia, pelvic abscess, post partum hemorrhage, pelvic abscess, poor wound healing and infection and thromboembolism.

Causes of an Infected Placenta

Most cases are due to an ascending bacterial infection and often the same bacteria involved in other urogenital infections are responsible for chorioamnionitis. The vagina and cervix maintain a microenvironment that prevents infections from reaching the uterus. This may be compromised thereby allowing pathogenic bacteria or even an overgrowth of healthy bacterial flora from reaching the placenta. Other risk factors may include poor urogenital hygiene, a short cervix and immunocompromised patients, like in HIV positive mothers.

While hematogenous spread of various pathogenic bacteria is possible, typically hematogenous infections that result in an infected placenta arise due to the TORCH infections :

Symptoms of an Infected Placenta

The clinical presentation can vary with only a few symptoms of low intensity present in some mothers. Diagnosis may therefore be confirmed with follow up blood tests like a complete blood count (raised WBC count) apart from the presence of clinical features. Some of the signs and symptoms of a placental infection includes :

At other times the symptoms are not typical of an infected placenta and the diagnosis can be missed without further investigation. Although an amniocentesis is avoided as far as possible, it may be necessary for a diagnosis in a subclinical infection.

Broad spectrum IV (intravenous) antibiotics are necessary to prevent maternal and fetal complications. This may be administered before assessing the results of a culture. The antibiotics may be continued by both mother and baby after birth, and the type of antibiotic used on both patients may differ. In acute chorioamnionitis, immediate delivery may be necessary especially if there are signs of fetal distress. However, this is dependent on the stage of pregnancy.

Placenta previa is the term when the placenta implants low in the uterus (womb), either partially or completely covering the cervix, or it may not cover the cervix at all. It is an uncommon but major complication of pregnancy. A placenta previa can lead to bleeding during or immediately after delivery.

How does a placenta previa occur?

The placenta is the conduit for nutrients and oxygen from the mother’s blood stream to reach the fetus. It only dislodges after delivery of the baby as the contracting uterus shrinks to a smaller size and shears away the placenta. If the placenta is blocking the cervix, the baby cannot travel down the birth canal during delivery.

The uterine muscles are arranged in a manner that allows it to constrict the the blood vessels of the uterine wall. This ensures that uterine contractions after delivery constricts the mother’s blood vessels that were communicating with the placenta. This mechanism ensures that there is only minimal post partum hemorrhage and is further backed up by the action of clotting factors in the blood. With a placenta previa, however, this mechanism is disrupted as the cervix and lower segment of the uterus thins (atrophy) prior to delivery and the uterine contractions cannot constrict the blood vessels.

Placenta can be one of three types :

Vaginal bleeding and occasionally uterine contractions are the only two symptoms that will be seen with a placenta previa. It is may be diagnosed upon conducting a pre-natal ultrasound although the mother has not experienced any symptoms.

The characteristic feature of a placenta previa is painless, bright bleeding after the first trimester. It is more likely to be placenta previa if the bleeding occurs from the second half of the second trimester onwards. The vaginal bleeding may vary from light spotting to a heavy flow. It can be intermittent, stopping spontaneously and then recurring after a few days or weeks.

The placenta is a communication point for the circulation of the mother and fetus. Nutrients and oxygen are transported to the fetus via the placenta. It also delivers wastes product and carbon dioxide from the fetus to the mother’s blood stream so that it may be eliminated. The placenta needs to be firmly implant on the wall of the uterus (endometrium) so that it can maintain contact throughout pregnancy. After delivery, the uterine contractions detach the placenta so that it may be expelled through the birth canal. This detachment ruptures the mother’s endometrial blood vessels and various mechanisms take effect to limit bleeding and seal the vessels.

With a low placenta, these mechanisms may be hampered and can lead to bleeding during and after delivery. This compromises the blood supply to the fetus and also puts the mother’s health at risk due to excessive bleeding from the implantation site. Placenta previa may be marginal (near but not covering the cervical opening), partial (partly covering the opening of the cervix) or complete (totally blocking the opening of the cervix). At times, the term low-lying placenta may be used to describe a placenta that is in the lower half of the uterus yet does not encroach on the cervical opening. It is would therefore not qualify as a marginal placenta previa but can still cause bleeding after delivery. 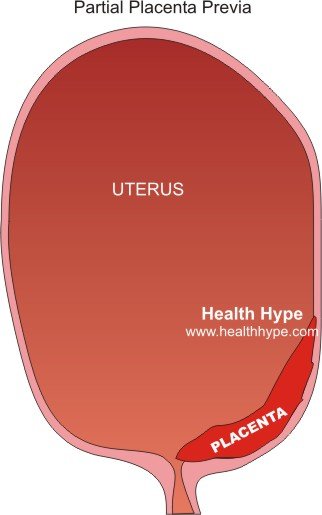 A low placenta is more likely to occur in women with certain risk factors. This, however, does not mean that every woman with one or more risk factors will experience a placenta previa during pregnancy. These risk factors include :