An infection is an invasion and multiplying of pathogenic microbes in the body tissues in which they are not usually present (1). Pathogenic means capable of causing disease. Infection does not always cause a disease.

A colonization is the usual presence of non-pathogenic and even potentially pathogenic microbes on the skin, in the nose, mouth, bowel, penile or vaginal mucosa, as a part of normal human flora, in the amount not harmful for the body – this is not an infection. An example is the presence of Lactobacilus acidophilus bacteria in the colon.

A contamination is the presence of germs which do not multiply, for example, in a contaminated (not infected)wound. Infected or septic wound contains multiplying microbes. Contamination also refers to presence of pathogenic microbes on medical equipment, in the water, food etc.

A carrier state is the non-usual presence of pathogenic microbes in the body, in the way not harmful for the carrier, but potentially dangerous for others, since the carrier is usually contagious. For example, if you have Staphylococcus aureus bacteria (a common cause of skin infections) in your nose, you may infect others, even if you alone never develop an infection.

Re-activation of an infection may occur; for example, a Varicella zoster virus, which has remained dormant in the roots of the spinal nerves after successfully healed chicken pox, may be re-activated during stress or certain disease, and can cause shingles.

Bacteremia, viremia, fungemia and parasitemia (the presence of microbes in the blood) may result in an infection of other organs, or sepsis.

Localized infection, like cellulitis, is limited to one or few body parts and presents with localized symptoms, like redness, swelling, pain or localized (nasal, ear, etc.) discharge.

Acute infection, like common cold, appears suddenly and lasts from few days to one month.

Chronic infection, like tuberculosis or AIDS, may last from several weeks to several years.

Recurrent infection is one that frequently affects a person, like folliculitis in those who share the same sport equipment, or fungal infections  in those with lowered immunity.

Asymptomatic infection causes no symptoms. Example: infection with Epstein-Barr virus (EBV), which can cause infectious mononucleosis, often triggers no symptoms in small children.

Infections are caused by microbes:

Invasion of multi-cellular parasites, like intestinal worms or head lice, into the body is called infestation. 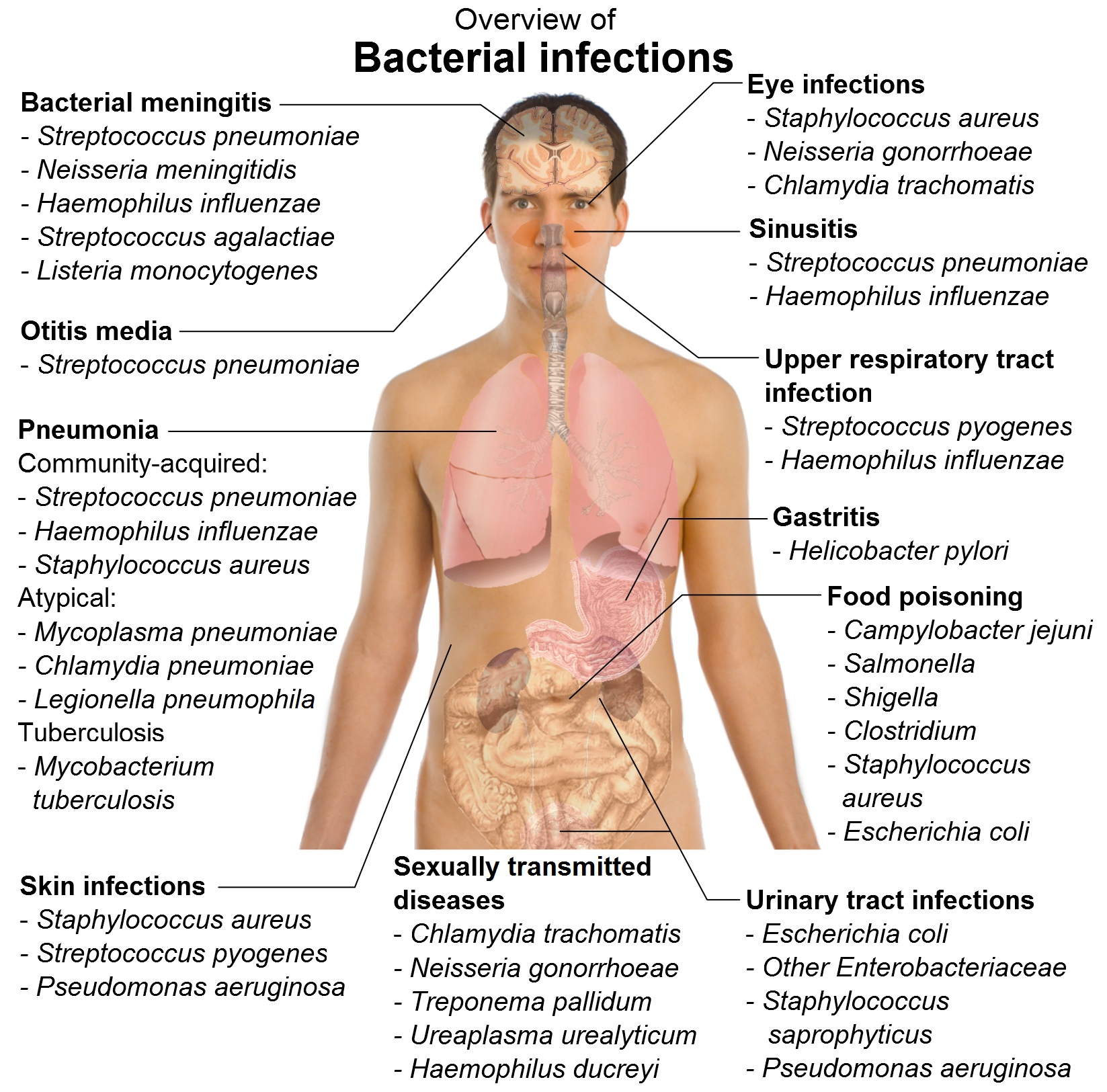 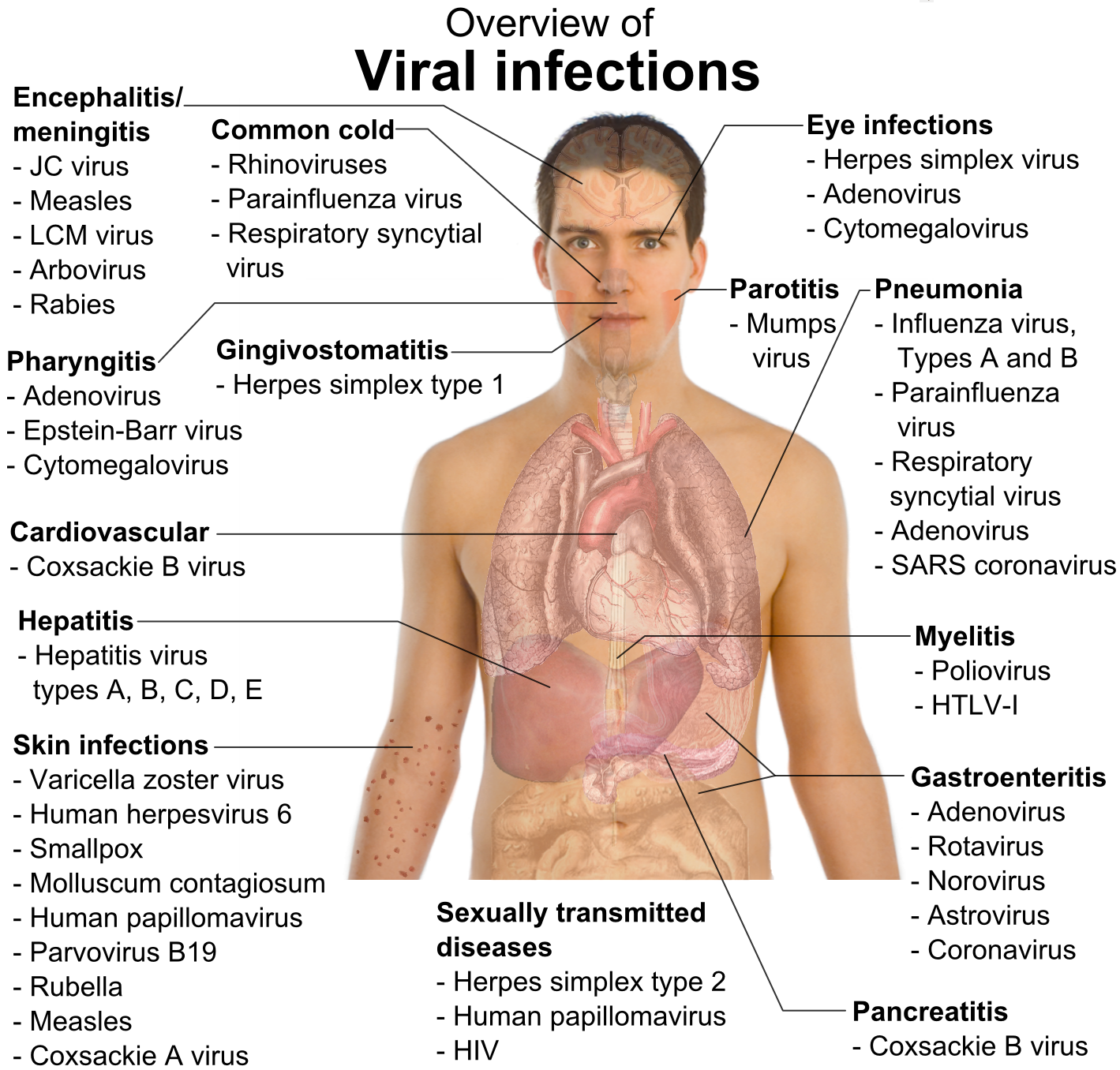 Fungal (yeast) infections in a person with a healthy immune system usually affect only the skin. Patchy areas with a brownish or reddish scaly rash on the scalp (scalp ringworm), trunk, limbs or groin (jock itch), peeled skin on the hands or feet (athlete’s foot), or discolored or cracked nails are typical symptoms of a skin fungal infection. Effective over the counter or prescribed anti-fungal ointments and oral medications are available.

In a person with a weak immune system, fungal infections, commonly caused by a yeast Candida albicans, may appear in the mouth (oral thrush), esophagus, rectum or vagina; systemic candidiasis is severe and commonly fatal infection.

Parasitic infections cause different symptoms, depending on the type of parasite and organ affected. Intestinal parasites cause bloating, diarrhea, mucus in the stool and eventual weight loss. Plasmodium malariae can cause episodes of fever, chills sweating and tiredness. Head and pubic lice, and scabies cause itchy skin. Treatment is with specific anti-parasitic drugs. Surgical removal of parasitic cysts, like in Echinococcus, from the liver, bones, brain or lungs is sometimes required.

Infestation (Latin infestare = to attack, disturb) is an invasion of multi-cellular parasites, like intestinal worms (helminths) or head lice to the body. Effective anti-helminthic and other specific anti-parasitic drugs are available.

What is incubation period?

In medical terms, the incubation period is the time from when a person is exposed to an infectious agent (pathogenic microorganism) till the onset of signs and symptoms. Not every person who comes into contact with an infectious agent will become infected but once the infection is acquired, the micoorganism will take a period of time during which it multiplies and spreads within the body until the point that signs and symptoms become evident.

Why do incubation periods differ?

Incubation periods can vary significantly for a number of reasons. This includes :

Incubation Periods of Some Infections

Incubation periods are approximate and may vary slightly. Refer to the guidelines from the health department in individual countries.

Symptoms and Signs of Infections

Symptoms commonly appearing in all types of infections:

NOTE: Any of above symptoms can appear in other conditions, like poisoning, allergies, etc., and not only in infections. There is no single specific symptom but a combination of symptoms and signs that speak for an infection.

Sources and Modes of Transmission of Infection

Sources and modes of transmission of infection are listed below.

Infection can be transmitted from person to person by:

Infections acquired in hospitals can be dangerous, since causing microbes are often resistant to regular antibiotics, and patients infected are often already seriously ill. Common HAIs include:

What Is a Fomite?

A fomite is an inanimate object or substance capable of transmitting infectious agents (microorganisms) from one object to another. Once contaminated, fomites may carry microbes for few minutes or several weeks, depending on the type of the microbe and certain circumstances, like air humidity and temperature. Examples of fomites:

Microbes may make harm by releasing toxins, for example, in food poisoning, a parasite Entameba hystolytica can release toxins, which can destroy colonic mucosa, resulting in bleeding ulcers and diarrhea.

Invasion of microbes triggers immune response of the body and attracts inflammatory cells, like leukocytes, and substances, like cytokines, which attack the microbes. Such a defense reaction regularly results in an inflammation of infected tissue, which can be observed, for example, as purulent discharge in common cold or swollen joint in bacterial arthritis. Toxins released by microbes often trigger fever.

Inflammatory response itself can be harmful. For example, Streptococcus pneumoniae , causing pneumonia, can trigger fluid collection in the lungs, impeding oxygen exchange between the air and the blood and thus reducing the oxygen supply to the tissues, what may result in death.

A cause of an infection can be often recognized from a combination of symptoms and signs. When in doubt, a doctor can take a sample of blood, urine, stool, sputum, nasal or other discharge and send it to laboratory, where microbes can be determined by serologic tests or a culture.

Effective anti-microbial medications for most infections, except viral ones, are available.