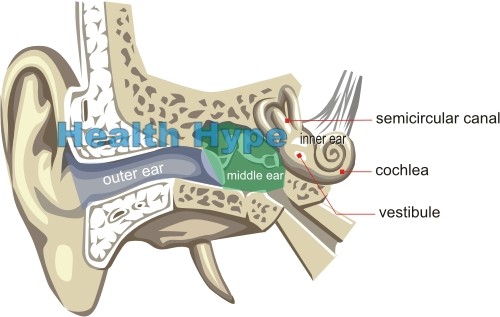 The vestibular system comprising the semi-circular canals and vestibule are involved in balance while the cochlea is responsible for the sense of hearing. These are a series of other ducts that allow various parts of the labyrinth to communicate with each other. It is important to note that the inner ear is surrounded by the middle ear, mastoid and subarachnoid space. Therefore any pathology within this ear can impact on these other areas, and vice versa.

Labyrinthitis is an inflammation of the labyrinth and its structures within the inner ear due to infectious or non-infectious causes. Since the labyrinth makes up the inner ear, labyrinthitis can also be referred to as otitis interna or internal otitis and must be differentiated from a middle ear infection (otitis media) and outer ear infection (otitis externa). The inflammation largely impacts on the vestibular system responsible for the sense of balance and therefore the characteristic clinical features of labyrinthitis tend to involve disorders with balance. When the entire labyrinth is affected (pan-labyrinthine), the cochlea is also involved and then hearing may be affected to varying degrees (sensorineural hearing loss). Labyrinthitis is sometimes referred to as vestibular neuritis, however, the vestibule nerve is affected specifically in neuritis and the interchangeable use of these terms is not always appropriate. 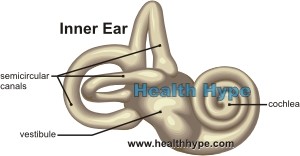 The labyrinth is a secured compartment and lies deep in the skull compared to the outer or middle ear. It is therefore difficult for microorganisms to reach it directly. However, the labyrinth’s position and proximity to other structures puts it at risk if there is an infection in these areas. It communicates with the middle ear at the round and oval window and with the subarachnoid space through the cochlear aqueduct and internal auditory canal. The labyrinth lies adjacent to the mastoid cavity separated by a thin layer of bone. Therefore labyrinthitis may be a complication of otitis media, meningitis or mastoiditis.

The fluid within the vestibular system stimulates small hair-like projections which sends signals back to the brain about the orientation of the head. This information is processed in conjunction with signals from the eyes, muscles and joints to establish the position of the body and make any necessary changes to maintain balance. However, with labyrinthitis the abnormal signals from the vestibular system does not correlate with information received from other parts of the body. It results in vertigo which is a characteristic feature of labyrinthitis.

Most cases of labyrinthitis are due to infections, usually viral or bacterial in nature, and are acute. Chronic labyrinthitis is more often associated with an autoimmune mechanism, however, the entire process is not clearly understood.

Symptoms tend to arise about a week after an upper respiratory tract infection. The most prominent symptom of labyrinthitis is vertigo. This is a sensation of the environment spinning around and may also be described as dizziness. However, dizziness is more accurately a feeling of lightheadedness which differs from the sensation of vertigo. It can be persistent or provoked only by movement of the head (positional vertigo). The vertigo may be accompanied by nausea and vomiting. Usually the vertigo lasts for just 3 to 4 days and then subsides although it may occasionally occur thereafter as acute attacks for a month or more.

The degree of hearing loss may vary and is sensorineural in nature compared to the conductive hearing loss seen with severe otitis externa or otitis media. Read more on conductive vs sensorineural hearing loss. Therefore it may be accompanied by tinnitus (ringing in the ears). However, adults with labyrinthitis may not experience significant hearing loss or tinnitus. Ear pain (otalgia) may be present to varying degrees and is often accompanied by a sensation of fullness deep in the ear. It may also be accompanied by neck pain and stiffness when associated with other severe infections of surrounding sites. A fever may also be present in infectious causes.

Another feature is abnormal and rapid shaking of the eyes known as nystagmus. It may not always be obvious but is often detected upon clinical examination if it is present. Otorrhea (ear discharge) may not always be present but is more likely to occur with a perforation of the ear drum and typically if there is co-existing otitis media or when labyrinthitis is associated with a cholesteatoma.

Other important signs and symptoms include :