Kienbock’s disease is known for a complicated course of treatment. This is mainly because of an absence of consensus among surgeons regarding various treatment options. Another reason for the lack of consensus, is the obscured information regarding the exact cause of the disease. Out of the several treatment options offered for Kienbock’s disease, none of them may provide complete relief from all Kienbock’s disease symptoms. Hence, each treatment option is tailored according to the patient’s requirement, to achieve a specific purpose, which eventually improves the functions of the hand and wrist. One should always keep this in mind, and have some amount of patience and understanding towards the efforts of the orthopedist and be open to try out several modes of therapy, either alone or in combination.

The relentless nature of the symptoms along with the tedious process of investigations, frequently leaves a person frustrated, which may even be followed by depression. Every new treatment option, involves a separate surgery, which is not quite comforting to a patient, especially after a couple of failed surgeries. This not only influences on the course of the disease, but is also responsible for a bad outcome due to the relative ignorance of the minute treatment guidelines. Hence, it is very important to not lose hope, and take every new treatment option, with the same amount of faith and follow it religiously until complete recovery.

Conservative management of Kienbock’s disease or pre-surgical treatment consists of immobilization of the wrist, for a period of three weeks, in a splint or a cast. This helps healing of minor injuries, prevents additional pressure on the lunate and allows the natural healing mechanisms of the body to re-establish an interrupted blood supply to the lunate. However, even if the symptoms resolve with this treatment, the wrist has to be monitored for progression of the disease for every 4-6 weeks for a year. For those who do not respond to this treatment or in whom the symptoms recur, one has to consult a hand surgeon, for further surgical treatment.

The surgical treatment of Kienbock’s disease depends on the stage of the disease and the structural integrity of the carpus (wrist).

Treatment for earlier stages (Stage 1 & 2) of Kienbock’s disease, where the lunate bone has just lost its blood supply, consists of revascularization surgery. Here there is not much of structural damage to the lunate, and so after surgery there are good chances for the lunate bone to sustain. This surgery involves taking a viable piece of bone from a different part of the body, preferably the lower part of radius bone, or from the iliac crest, and inserting it within the lunate. This is called as bone grafting, which stimulates the bony repair mechanisms of the lunate. The wrist has to be immobilized again for 3-4 weeks after surgery, to allow the lunate bone to heal, following which serial x-rays are taken every 4 weeks to monitor the progress of healing. If successful, then by 16-24 weeks there is growth of normal bone in place of the graft along with relief of symptoms.

For advanced stages of Kienbock’s disease, the lunate begins to collapse and so has to be removed. But removing the lunate alone would disturb the function of the other wrist bones and so it has to be accompanied by removal of a couple of neighboring carpal bones to balance the forces in the wrist (Picture 1). The surgical procedure for this is called proximal row carpectomy, where the scaphoid and triquetrum carpal bone are removed along with the lunate. This is associated with a restriction of wrist movements, but as the main focus of the disease is removed, there are no further complications. 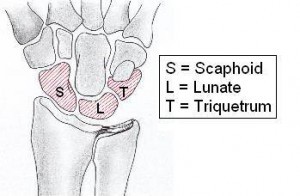 The most terminal surgical option for highly advanced Kienbock’s disease, is that of wrist fusion. This is when the lunate bone has completely been broken down by the body, and the other bones of the wrist have also collapsed due to the imbalanced forces acting on the wrist. This surgery helps to provide stability to an unstable wrist of collapsed carpal bones. It involves removal of the joint cartilage of wrist bones, along with insertion of bone graft between them. A metal plate along with screws is used to keep the wrist in fixed position and provide a temporary support (Picture 2). The wrist is immobilized for 4 to 6 weeks in a plaster or fiberglass cast, until the carpal bones to fuse to each other forming a single bone. Thus, the wrist is fixed in a predetermined position called the functional position. 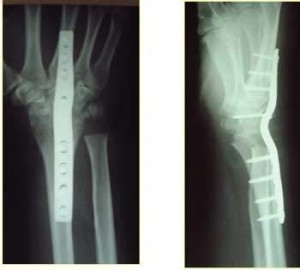 In individuals with negative ulnar variance (explained in Kienbock’s Disease Investigations) as a cause of Kienbock’s disease, a surgical shortening of the radius bone greatly reduces symptoms, and prevents progression of the disease. However, early detection of negative ulnar variance is not that common, and so this surgery is less common, even though it is quite effective.