Miliaria is an itchy skin condition, usually with eruptions, caused by retained body sweat (perspiration). This condition is also known by many common names, including prickly heat, heat rash or heat pimples and sweat itch. The rash that may present in miliaria ranges from fine papules (small solid pimples), to fluid filled vesicles or severe skin redness, with an itching sensation. Miliaria is often confused with urticaria (hives) but is usually seen after strenuous physical activity or in hot, humid conditions, when sweat is usually produced.

In miliaria, the duct of the sweat glands are obstructed or inflamed and this prevents sweat from exiting onto the skin through the pores. The sweat is retained within the skin and this causes significant irritation and a prickling sensation. Not all sweat gland ducts are obstructed in miliaria and perspiration may still be present but the affected areas usually have less sweat or none at all. Miliaria usually does not involve the entire body and the face, chest, back, shoulders and arms are usually the areas most often affected.

Miliaria occurs more often in babies and children due to the underdeveloped sweat glands and hyperhidrosis (excessive sweating/perspiration) may also predispose a person to developing a heat rash. Hot and humid climates and poor ventilation in a hot environment or when undertaking any strenuous physical activity like working out in the gym may also result in a prickly heat rash. 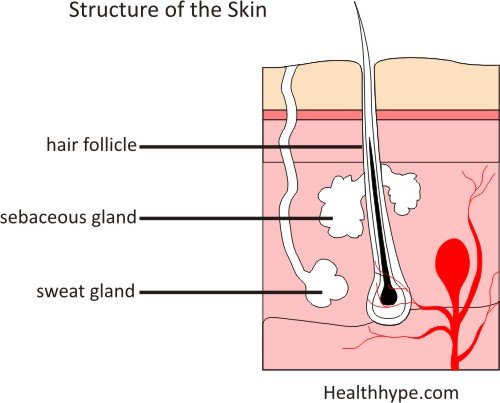 The type of rash in miliaria may differ depending on which part of the sweat gland duct is obstructed or inflamed.

This type of prickly heat rash usually occurs when the obstruction of the sweat gland is within the epidermis (outer layer of the skin), near the surface of the skin. Miliaria crystallina presents as tiny vesicles (small fluid filled vesicles). They often appear like minute clear drops and rupture when scratching or rubbing. Mild itching may be present although usually there is no itching at all.

Miliaria rubra is the more common type of prickly heat rash and has the characteristic inflamed and itchy heat pimples that is usually associated with miliaria. These papules look like tiny bumps which are not filled with fluid. The affected area may also be quite red which is often aggravated by itching. In miliaria rubra, the duct obstruction is deeper within the epidermis (outer layer of skin) than in miliaria crystallina.

This type of miliaria occurs when the obstruction of the sweat gland duct occurs deeper in the skin within the dermis (inner layer of the skin). The skin may also appear red and there may be no eruptions present. Alternatively large ‘lumps’ may appear since the sweat is trapped deep within the skin. Miliaria profunda is not common and the rash is usually not itchy although sometimes the lumps may be painful. It may occur as a result of other inflammatory skin conditions and if large areas of the skin are affected, it can lead to certain complications, like fever and heat exhaustion.

A corticosteroid cream assists with reducing inflammation and easing itching. In some cases, an antimicrobial ointment may be used due to the naturally occurring skin bacteria that may contribute towards the development of miliaria. These bacteria, like Staphylococcus epidermidis, secrete a sticky substances that may cause a blockage of the sweat gland duct. Miliaria is not an infection like a staph skin infection but the presence of large colonies of naturally occurring skin bacteria may be a contributing factor.

Calamine lotion and zinc oxide creams may assist with the itching and have a drying effect on the skin although excessive use of any topical application can also contribute to blocking the pores. Miliaria is not a serious condition but if large areas of the body are affected, the cooling effect of perspiration may be hampered. This can cause an increase in core body temperature resulting in a fever and heat exhaustion. Appropriate treatment is required to prevent more serious complications.

The most effective way to prevent prickly heat rash is to keep cool, especially when in hot or humid environments or exercising. Air conditioning, cool air from fans and using light colored clothing made of thinner fabrics to allow proper ventilation are other useful ways to reduce the outbreak of a heat rash.

Regular bathing and thorough scrubbing or exfoliating will prevent dead skin cells from mixing with sweat and oil on the skin which can then cause a blockage of the sweat gland duct. Anti-perspirants may offer some short term relief in preventing a heat rash but are not practical for large areas of the body affected with miliaria.