Red blood cells, or erythrocytes, are the most abundant cells in the bloodstream and contains hemoglobin, the compound that carries oxygen through the body. While hemoglobin can occur in a free state in some animals, in the human body it has to be contained within a cell – the red blood cell. Any disruption of the red blood cells, its quantity, shape, size, structure or life cycle can therefore affect the oxygen-carrying capacity of the blood.

Apart from carrying oxygen, which is the main function of red blood cell, it can also conduct the following functions.

Shape and Size of a Red Blood Cell

A red blood cell is a biconcave disc. Simply it is a round ball that is squeezed from two opposite ends to appear, widest at the sides and narrowest in the middle.

A red blood cell measures about 6 to 8 micrometers in diameter (average = 7.8 um) with an average thickness of 2 micrometers (2.5 um at the thickest point and less than 1um at the center). Although a red blood cell is wider than some capillaries, its flexibility allows it to become distorted as it squeezes through narrow passages and then restores  to its original shape. 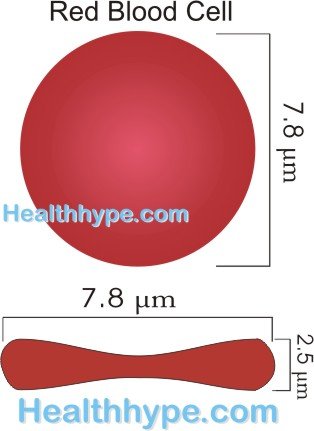 Quantity of Red Blood Cells in the Human Body

Red blood cells have an unusual structure compared to other cells in the human body. It lacks a nucleus, mitochondria or endoplasmic reticulum. However enzymes within the red blood cells allow it to produce small amounts of energy (ATP from glucose). The most important part of a red blood cell is hemoglobin, which is essentially the functional component of the cell.

Hemoglobin is the molecule that is responsible for the oxygen carrying capacity of a red blood cell. It also gives these cells a red color and is a combination of heme and globin. Heme is formed when succinyl-CoA binds with glycine to form a pyrrole molecule. Four of these pyrrole molecules combine to form protoporphyrin IX which binds with iron to form the heme molecule. Globin is a long polypeptide chain.

Every 100 milliters of blood, which contains various blood components, has about about 15 grams of hemoglobin.

The stimulus for producing red blood cells is hypoxia (low oxygen state). However, hypoxia alone will not be sufficient to trigger the production of new red blood cells unless the hormone erythropoietin is circulating in the bloodstream. This hormone is primarily produced by the kidneys. The process of manufacturing red blood cells in known as eryrthropoiesis.

The life span of a red blood cell is approximately 120 days but may be removed out of circulation at any time if it is severely damaged and non-functional. Most of the red blood cells self destruct rather than being actively removed from the circulation and destroyed. The primary site where this occurs is in the spleen.

Once a red blood cell ruptures, hemoglobin is released into the circulation for processing. This is primarily done by the Kupffer cells of the liver and macrophages in the spleen and bone marrow. These macrophages release iron which is carried by transferrin to the bone marrow where it can be reused for the production of new red blood cells. The remaining porphyrin portion of the hemeglobin molecule is converted to bilirubin by the macrophages. The liver cells (hepatocytes) take up the bilirubin, conjugate it and release it in the bile.