Of the scores of parasitic diseases that can afflict humans, schistosomiasis is among the most devastating. Yet it is still not a well known disease in developed nations despite global travel placing more people at risk than just residents of endemic areas. Schistosomiasis infects over 200 million people throughout the world and can cause chronic illnesses. It is even linked to certain types of cancer and causes some 200,000 deaths annually. For people who enjoy exploring foreign destinations off the typical tourist route, schistosomiasis may pose a real threat particularly where fresh water activities are involved.

Schistosomiasis is the medical term for infection with schistosome worms. The disease is also known as bilharzia, snail fever or Katayama fever. These parasitic worms partially develop within certain types of freshwater snail and can enter through the skin if a person makes contact with the contaminated water. Schistosome worms belong to a class of organisms known as trematodes. It is also known as flukes or flatworms. Since the schistosome worms travel through the bloodstream, it is also referred to as blood flukes. 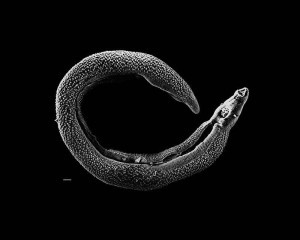 Most flatworms enter the body through the ingestion of contaminated food and drinking water. However, with human schistosome infection the worm is able to penetrate the skin. A person who swims or even wades through contaminated freshwater sources, like rivers, is at risk of being infected with the worm. Most infections occur in Africa, although the worm is present in the Middle East, Asia, parts of South America and certain Caribbean islands. It is not naturally found in water supplies in the United States. The prevalence of different species varies by region.

The worms may release eggs in the human host which can then be passed out with urine or feces. It may contaminate freshwater again and put others who come in contact with the water supply at risk. The same person may be repeatedly re-infected. Travelers to and immigrants from endemic areas may import the disease but it is not transmitted in freshwater in countries like the United States and Canada. Currently over 200 million people in 76 countries are infected with another 600 million or more people at risk. The disease is associated with extreme poverty and poor sanitation, especially where rivers are used for bathing and as a toilet. 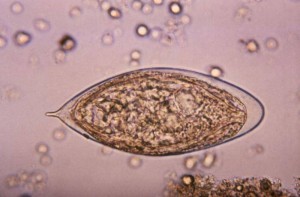 Picture of the worm eggs

There can be some degree of overlap but S. japonicum and S. mansoni reside in the veins draining parts of the small intestine and large intestine respectively, while S. haematobium resides in the veins of the bladder and sometimes the rectum as well. Female worms deposit eggs in the veins near the liver or bladder. Eventually these eggs will slowly move towards the lumen (internal cavity) of the intestines or bladder where it will be expelled with urine or feces. If the urine or feces make contact with freshwater where suitable snail hosts are present, the cycle can start again.

Schistosomiasis is a chronic illness. The initial acute phase may occur several weeks after infection but does not arise in the majority of people infected. This acute phase corresponds with the worms depositing eggs and the symptoms are usually intense. It can last for several weeks and resolve on its own but in a minority of cases it can be fatal. Acute schistosomiasis is more likely to occur in heavily infected individuals.

Chronic schistosomiasis is a consequence of the body’s immune system responding to the worm eggs. It can lead to granuloma formation and even fibrotic scarring. The worms itself are not so much of a trigger of an intense immune response as the eggs. This immune response occurs both locally where the eggs are located and there is a circulating immune response. However, if the immune response is initiated then the worms can live for years within the bloodstream without any significant symptoms.

The infection usually leads to bowel and bladder symptoms as the eggs migrate to these organs and the immune system responds to it. Liver disease is also possible in heavy infections. The eggs can also reach the circulation of the lungs via the inferior vena cava (IVC) where it is can also cause symptoms. Sometimes granulomas around the eggs dislodge and can travel to the brain and spinal cord. Infection with S. haematobium is also associated with a greater risk of bladder cancer, specifically squamous cell carcinoma (SCC). Chronic schistosomiasis may also be associated with gallbladder cancer.

The majority of people will not have acute symptoms and do not even know that they have been infected until chronic symptoms arise.

It is these symptoms that have given rise to the common names such as snail fever and Katayama fever for schistosomiasis. 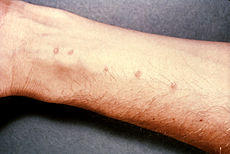 The chronic symptoms depends on the organs most affected. It also depends on whether the immune system has attempted to wall of the eggs or worms (granulomas) or if scar tissue has formed at certain sites.

A diagnosis of schistosomiasis needs to be confirmed with blood and stool tests.

The drug praziquantel is the treatment of choice. It is an antischistosomal drug which affects the worm in several ways that allows for the body’s immune system to ultimately destroy it. Even if the worm is not immediately destroyed, the drug paralyzes the worm and minimizes egg release in the body. Oxamniquine is another drug that is used for schistosomiasis but is no longer approved for use in the United States. Treating the infection in the acute stage may also require corticosteroids to suppress inflammation and associated symptoms.

There is currently no vaccine to protect against schistosomiasis. Prophylactic (preventative) agents like DEET are effective in killing schistosome cercariae and is advised for travelers to endemic regions. Swimming or even wading in freshwater within endemic areas should be avoided by travelers. However, limiting contact is not as simple for residents, especially those who depend on these freshwater sources for bathing, washing clothing, drinking and as a toilet facility.