Superior vena cava syndrome is a condition where blood flow through one of the major veins to the right side of the heart is blocked. This vein is known as the superior vena cava (SVC). It carries low oxygen blood from the upper part of the body to the right atrium of the heart. The other major vein is the inferior vena cava (IVC) that carries deoxygenated blood from the lower part of the body. There are several reasons why the superior vena cava may become obstructed, either partially or completely. The blockage may arise within the vein itself or external compression on the vein can also cause a blockage. If not treated immediately, superior vena cava syndrome can be lead to serious complications such a cerebral edema (brain swelling). Therefore SVC syndrome is considered to be a medical emergency.

Overall superior vena cava syndrome is an uncommon condition. In fact it affects less than 10% of patients who have a right-sided mass within the thoracic (chest) cavity. Most of these cases arise with cancer of the right lung and a smaller number is seen with lymphoma. Since lung cancer is more common in males, the incidence of superior vena cava syndrome is therefore higher among males. Superior vena cava that arises with cancers is mainly seen in the 40 to 60 year age group. In younger people it mainly occurs for reasons other than cancer. It is rare in children and infants.

Blood that is low in oxygen (deoxygenated blood) returns to the right side from the heart through the vena cavae :

This blood then enters the right atrium during diastole (relaxation of the heart). It is pushed into the right ventricle which then sends the blood to the lungs for re-oxygenation via the pulmonary artery. An adequate amount blood has to return to the heart (venous return) for the blood to fill and stretch sufficiently for forceful contraction. This ensures that enough blood can also return to the left side of the heart in order to be sent out to the rest of the body. Circulation also ensures that tissue fluid and blood does not become congested in any part of the body or veins. 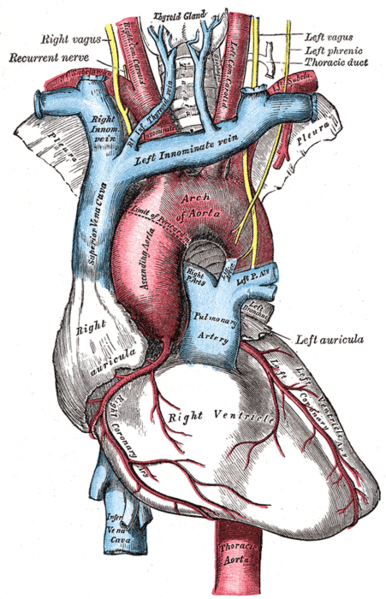 In superior vena cava syndrome, there is congestion within the SVC due to some obstruction. There is some degree of compensation by collateral veins that drain blood from the upper half of the body. This occurs through the azygous and internal mammary venous systems and its tributaries. However, these systems cannot completely compensate for the reduced return through the superior vena cava. As a consequence the pressure in the SVC and most of the veins in the upper body increases substantially. Therefore swelling occurs in the upper body most notably in the head. Distribution of sufficient oxygenated blood throughout the body is subsequently hampered to some degree.

It is not uncommon for patients to be asymptomatic, particularly in the early stages or when the SVC is only partially obstructed. As the condition progresses only minor symptoms may be evident, which is often missed. As the SVC becomes completely blocked, the symptoms become more evident and continue to worsen. Lying flat or leaning forward tends to aggravate the symptoms. These symptoms include :

Not all of these symptoms may be present to the same degree at the same time in SVC syndrome.

Blockage of superior vena cava may arise through one of two ways :

An obstruction within the SVC (intrinsic) mainly occurs when cancer invades the blood vessel wall from a surrounding site, like in right lung cancer. However, any mass, deformity of the vessel or inflammation of the vein can be a precipitating factor.

Compression of the vein from a mass outside of it (extrinsic) is the other mechanism by which a blockage of the SVC may occur. Since the walls of veins are thin compared to arteries and the blood pressure is lower, it can be more easily compressed by an external mass.

The majority of cases of superior vena cava syndrome arises with malignancies in the mediastinum.

The most common malignant cause of SVC syndrome is bronchogenic carcinoma (lung cancer) and the most common type of small cell carcinoma. The other major malignant cause, although much less common, is non-Hodgkin’s lymphoma. Other cancers that arise in the mediastinum or arise elsewhere and spread to the mediastinum may also be responsible for SVC syndrome but overall this is rare.

It is important to note that SVC syndrome only occurs in a minority of cases when these malignancies are present.

Some of the non-cancerous (benign) causes of superior vena cava syndrome includes :

Patients with prominent symptoms and clinical signs of SVC syndrome may be diagnosed even without further investigations. However, various investigations should be conducted to assess the degree of SVC obstruction and the possible cause. Patients with minor symptoms require investigations for a conclusive diagnosis. These tests include :

Thrombolytics can be used to breakdown a clot thereby increasing the blood flow in SVC syndrome cases where these is thrombosis. However, this does not remove the primary cause and the clot may form again later. Therefore anticoagulants are also prescribed to prevent new clot formation until the underlying cause is treated.

Other treatment measures depends on the cause. Radiation therapy and chemotherapy may be used to target the malignancy when surgical removal of the tumor is insufficient to reduce the obstruction of the SVC.