Amyloid is a substance which is composed of different types of proteins. It is a proteinaceous substance in that it is composed largely of protein in addition to other compounds like polysaccharides, lipids and even hormones. In amyloidosis, amyloid is deposited and builds up between the cells of tissues and organs. This is not a normal physiological process and is a result of some pathology (disease, disorder, dysfunction).

Amyloid plaques or deposits may be present with no signs or symptoms appearing. However, it can cause serious clinical manifestations and even lead to death depending on the organs involved and the extent of the deposits.

While amyloid is often labeled as a protein, it is not solely composed of proteins and contains other substances as well. Although protein is the largest component of amyloid, it is the type of protein that differentiates each type of amyloidosis.

Amyloid is made up on many different types of proteins some of which are unique to the area being affected or nature of the disease present. The main proteins that make up amyloid is secreted by the cells of the area in a manner which causes the protein to form a layered sheet which ‘folds’ upon itself. This creates  elongated structures, known as protein fibrils, which align in pleats, giving amyloid deposits its unique appearance. Some of the amyloid is composed of one or more types of amyloid protein although one type is usually predominant.

There are different types of proteins found in amyloid deposits. The two main types are :

Other types of amyloid proteins include :

There are two other types of amyloid proteins which are sometimes confused with their normal counterparts and precursors. 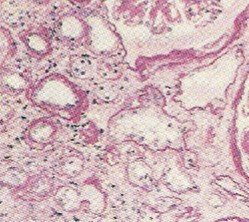 Picture : Amyloidosis of the Kidney

Islet-amyloid deposits occurs in the pancreas of most type 2 diabetes sufferers. It is composed of islet amyloid polypeptide (IAPP), or amylin, which is also a normally occurring hormone that is secreted with insulin. Due to some unknown mechanism, this hormone aggregates and forms protein fibrils. (1, 2)

Prion protein (PrP) which is associated with neurogenerative diseases, most notably Creutzfeldt-Jakob disease (CJD or “Mad Cow” disease). The prion protein gene (PRNP) encodes the prion protein and under normal circumstances, it is responsible for the manufacture of the nonpathogenic cellular human prion protein (PrP). In certain diseases like CJD these normal prion proteins are found deposited in a misfolded state as the toxic PrPSc. (3, 4)

It is important to note that these are not the only types of amyloid proteins.

Despite confusing classifications, amyloidosis can be simply classified as :

Newer trends in classifying amyloidosis involves the chemical classification of the type of amyloid protein.

As the amyloid deposits increase at a specific site, the function of the organ is disrupted.

For example, in amyloidosis of the kidney, the damage to the filtering system will lead to the typical signs, symptoms and complications associated with kidney damage. In systemic amyloidosis, many sites are affected simultaneously leading to a host of signs and symptoms that can result in life threatening complications as multiple systems are impaired or fail.

Amyloid deposits may not always be obvious and deposits can be missed by investigative techniques like an x-ray, CT scan and MRI. In many instances, amyloidosis is only diagnosed upon performing an autopsy and using chemical stains to highlight the affected areas. An organ may not increase in size due to amyloidosis although if there are large deposits, organ enlargement is noticed. In these cases, a firm waxy gray substance will be noticed in the tissues which is the amyloid deposits. With organ failure, it is possible that an organ my shrink due to amyloidosis. 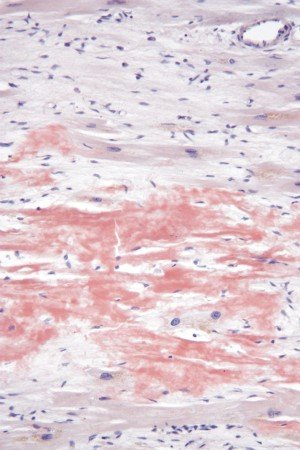 As amyloid deposits grow, they surround cells and groups of cells occupying the interstitial space. Over time they encroach on the cells, trapping it and leading to cellular death.  Depending on the organ affects and extent of amyloid deposition, signs and symptoms may vary and can eventually lead to death.

Because amyloid deposits occupy space and grow over time, it is sometimes confused with a tumor. An amyloid deposit is not a tumor although it does occupy space like a tumor. The treatment of amyloidosis may involve certain chemotherapeutic drugs which are used in cancer and it is possible for amyloidosis to occur in a tumor as the protein synthesis within the local cells are affected. Nevertheless, amyloidosis and cancer are two distinctly different conditions.

A biopsy is usually necessary to conclusively diagnose a case of amyloidosis. The aspirate is stained with the Congo red stain which adheres to amyloid as indicated in the pictures above.