Asbestosis is an interstitial lung disease caused by the inhalation of asbestos particles. It is a type of pneumoconiosis, which are lung diseases that occur as a result of inhalation of mineral dusts, but it is not the only asbestos-related disease. Other diseases like asbestos-related pleural disease with pleural effusions (fluid around the lungs), cancer of the lung or pleura (mesothelioma) and even malignancies elsewhere in the body are associated with asbestos exposure and inhalation.

There main types of asbestos particles include :

Asbestos fibers are long and either curved or straight. The curved fibers like chrysotile are known as serpentines, while the straight fibers like crocidolite and amosite are known as amphiboles. Chrysotile (picture below) is the most widely used asbestos, accounting for some 90% of all types of asbestos used in industry. However, it is the less prevalent amphiboles that are the most pathogenic and more often related to mesothelioma (cancer of the pleura). 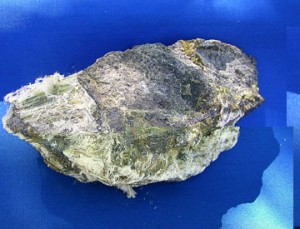 How does asbestos cause lung disease?

It is important to note that not every person exposed to asbestos particles will develop lung or related extra-pulmonary diseases. The incidence is directly correlated with the amount of particles inhaled. Size, shape and solubility are other factors. Individual susceptibility is always a factor to consider and cannot be quantified in a manner to identify high risk individuals.

Asbestos particles are quite aerodynamic and coupled with its small size, it can pass fairly easily into the distal airways and lung parenchyma. This is especially true of the straight amphiboles which can travel with the stream of air into the deeper recesses of the lung. Chrysotiles on the other hand are more easily entrapped in the mucus lining the upper airways and subsequently passed out of the respiratory passages. Amphiboles are also less soluble than chrysotiles, can penetrate the epithelial layer and lodge in the tissue spaces. This means that it is less likely to be flushed out as a solute in the tissue fluid or lymph. Its presence causes inflammation of the lung tissue with an influx of macrophages.

Asbestosis is a diffuse interstitial fibrosis of the lung meaning that the area affected is widespread with the development of fibrous tissue. Despite the attempts of the alveolar and interstitial macrophages to phagocytose and remove the asbestos particles, it persists in the air sacs and tissue spaces for years. When coated with ferritin from the phagocytes, these asbestos particles appear as golden-brown rods in the lung tissue known as ferruginous bodies (picture below). The action of the macrophages against the asbestos particles also partly damages the surrounding tissue and promotes fibrosis (fibrogenic). 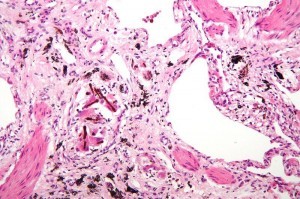 However the other concern is that asbestos can cause malignancies because it is a tumor initiator and promoter (oncogenic). This is compounded by cigarette smoking or concomitant exposure to other dusts and chemical vapors that are known carcinogens. However, it may remain asymptomatic for years and it is rare for any signs or symptoms to become apparent within the first 10 years of first exposure. Most symptoms appear after 20 years or more.

The signs and symptoms of asbestosis rarely appear within the first 10 years of exposure to asbestos. Most patients display symptoms after 20 to 30 years following first exposure. This often confuses the diagnosis, especially if a patient does not report prior to asbestos exposure. Radiological examination (x-ray, CT), asbestos bodies in the sputum / BAL, and asbestos fiber counts on lung biopsy contribute to a conclusive diagnosis. Abnormalities detected on a pulmonary function test is non-specific for asbestosis but should be used as a means to assess the extent of impairment and monitor disease progression.

Signs and Symptoms of Asbestosis

One of the first symptoms for which patients seek medical attention is difficulty breathing (dyspnea). It is present from the early clinical stages of the disease and worsens as the disease progresses. Initially it appears as exertional dyspnea meaning that the difficulty breathing only arises with activity, the severity of which does not correlate to the level of activity. With time it persists even during rest.

It is a non-specific symptom for asbestosis and since this disease in fairly rare in comparison to other respiratory and cardiovascular diseases, asbestosis should not be the first consideration without other presenting symptoms and a definitive etiology. In smokers, the chronic obstructive pulmonary diseases (chronic bronchitis, emphysema) should be first excluded.

A dry cough (non-productive) that is persistent and often associated with chest pain may gradually arise. A productive cough (cough with sputum) may be seen over time and is more pronounced during secondary infections (acute). Once again, COPD should be considered in smokers and the various other more common causes of chest pain with coughing. Pleural plaques are the most common manifestation of asbestos exposure and it is important to identify symptoms of pleurisy although features like a pleural effusion (fluid around the lungs) is not always seen even with pleural involvement.

Clubbing is an advanced sign of asbestosis but as with the other symptoms mentioned above, it is not specific for asbestos-related lung diseases. Clubbing is a bulbous enlargement of the fingertips with distortion of the fingernail making it appear very curved or humped (refer to pictures below).

Other symptoms of asbestosis

The presence of other symptoms may be related to complications or other asbestos-related diseases. Signs of cyanosis with peripheral edema (swelling of the legs and sometimes hands) may be an indication of right sided heart failure. Unintentional weight loss with lymphadenopathy (enlarged lymph nodes), hemoptysis (coughing up blood) and malaise may be related to carcinoma of the lung or pleura (mesothelioma) and need to be investigated immediately, especially in a patient with confirmed asbestosis.