If there is one abdominal organ that is probably given the least thought by most people then it would have to be the spleen. Many people do not know what the spleen is, where it is located or what it does. It is only in rare cases that the spleen is heard of, like when it has to be removed after a rupture following an injury, or when it drastically swells in certain diseases. The spleen is not a vital organ, meaning that you can live without it. But it does play several very important roles in the body. It is not surprising that many people are caught “off guard” when told that there is a problem with the spleen as the symptoms are often vague.

The human spleen is about the size of a fist and is tucked under the left ribcage. It usually cannot be felt as most of it is shielded by the ribs. The spleen is a reservoir of  blood and when needed, blood can be ‘squeezed’ out and enter the circulation. However, one of the main functions of the spleen is to filter blood. It has a large population of immune cells that can remove debris in the blood and destroy invading microorganisms. 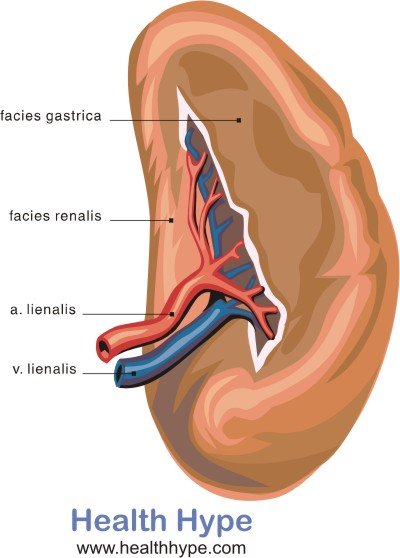 The two main problems that arises with the spleen is when it is:

A splenic rupture is usually acute meaning that it occurs suddenly often as a result of trauma to the left side of the body. This may occur during a car accident, injuries from contact sports and other forms of blunt or sharp force trauma.

Splenomegaly is the medical term for an enlargement of the spleen. It often occurs with an enlarged liver and the collective term is hepatosplenomegaly. Enlargement is seen with infections, liver diseases, cancers like leukemia and lymphoma, certain autoimmune diseases, a cyst, abscess and other space-occupying lesions. Splenomegaly is a sign of some underlying spleen or systemic problem and not a disease on its own.

Other problems of the spleen may include: 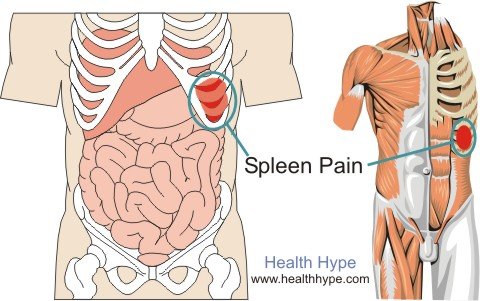 Spleen pain is usually felt in the upper left part of the abdomen. Since the spleen sits next to the stomach and kidney, many people confuse spleen pain for stomach pain or kidney pain. There may be tenderness when applying pressure on the area and there are no distinctive features that can differentiate spleen pain. Mild to moderate enlargement of the spleen (splenomegaly) does not usually result in pain. Diffuse abdominal pain and a low blood pressure (hypotension) are serious signs indicating bleeding within the abdominal cavity and significant blood loss.

In mild acute spleen conditions and chronic problems, spleen pain and tenderness are often not present. However, many people with an enlarged spleen may complain of a sensation of fullness in the left upper quadrant of the abdomen. Often it is described as bloating and thought to be associated with the stomach. This is further supported by the fact that the sensation increases after eating food as the stomach distends and only smaller amounts of food may be tolerated. Even moderate splenomegaly may present with fullness.

The spleen holds and filters large amounts of blood. A rupture in the spleen can affect the hemodynamics in the body. This means the circulation of blood is disturbed and the body will also take measures to reduce blood loss like constricting blood vessels. Collectively this may be experienced as lightheadedness or dizziness as blood flow to the brain changes as does the circulation in most parts of the body. These are non-specific symptoms that should be taken very seriously when it occurs after injury to the spleen area even if other symptoms are not evident.

The spleen plays an important role in immunity and is sometimes said to be the largest lymph node in the body. Apart from filtering the blood it also contains a large population of immune cells, and produces opsonins and antibodies that enhance immune activity. When the spleen is experiencing problems, the immune function may be affected. Conditions like leukopenia arise as the spleen traps the white blood cells among other mechanisms that impair immune defenses. Lower immunity means that the body is more prone to infections and this may be seen as repeated infections or persistent infections that do not easily resolve even with treatment.

One of the important functions of the spleen is to destroy old and damaged red blood cells so that new cells can enter the circulation. However, certain spleen problems can heighten this function and cause more red blood cells to be destroyed than would normally occur. This overactivity is known as hypersplenism. It leads to anemia since the rate of destruction of red blood cells may surpass the production rate. Anemia may present with paleness of the skin and mucous membranes (pallor) as well as low blood pressure (hypotension).

The components of red blood cells have to be removed from the body by the liver. However, when there are conditions like hypersplenism the liver may not be able to cope with the rapid destruction. Substances like bilirubin, a byproduct of red blood cell destruction, may then build up in the bloodstream. It can be deposited in the skin and mucuous membranes giving rise to the distinctive yellowish color known as jaundice. Liver diseases like cirrhosis also present with jaundice and can cause hypersplenism as well thereby leading to more severe jaundice.

The spleen also holds up to 40% of the total platelet mass in the body. Platelets are a component of blood that play a central role in clotting to plug any leaks in the blood vessels. However, in splenomegaly up to 90% of the total platelet mass can be taken up into the spleen tissue. This leads to a decrease in platelet levels within the bloodstream, known as thrombocytopenia. Since the platelets are removed from the circulation, the blood’s clotting ability is impaired and a person may bleed more easily.