What is the abdomen?

The abdomen (most likely derived from the Latin word abdodere = to conceal, to hide; possibly in the sense that whatever was eaten is hidden) is a body cavity lying between the chest and pelvis, limited by the diaphragm above and continuing into the pelvic cavity below. The abdomen is also referred to as the belly or tummy. Sometimes the abdomen is also called the stomach but this is incorrect because the stomach is a specific organ.

Being the largest cavity in the human body and containing the most organs than any other cavity, the abdomen is often given much focus in medicine. It is the often the source of some of the more common as well as serious diseases that afflict humans and containing the most amount of organs, it is also more likely to be plagued with various symptoms, such as abdominal pain.

Location of the Abdomen

It is often thought that the abdomen stars from the lower end of the costal cartilage meaning the imaginary horizontal line that runs across the inferior borders of the last rib on either side. Actually the abdomen starts approximately from beneath the 8th rib, or more correctly, at the imaginary horizontal line that runs along in the bottom edge of the sternum (breastbone).

This means that the upper abdominal contents like the liver, stomach, and spleen are neatly tucked under the ribcage. Apart from considering the diaphragm as being the upper internal border and the imaginary line between the iliac crests of the hip bone as being the lower border, it may also help to define the abdominal cavity by its organs and structures. 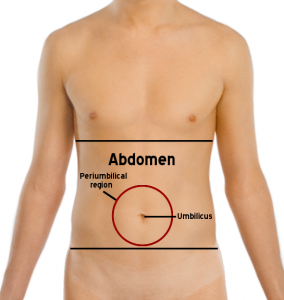 Organs in the Abdomen

The stomach, the common term used to refer to the abdomen, is actually only one organ in the abdomen, lying between the esophagus (gullet) and duodenum (first part of the small intestine). The abdomen is also referred to commonly as the tummy but this term is used interchangeably between abdomen and the stomach (organ).

It is also important to realize that certain organs like the bladder in childhood and the pregnant uterus can be located or extend up into the abdominal cavity.

Strictly speaking, the following organs are defined as abdominal organs. While some parts could extend downwards into the pelvic cavity, or even protrude into the the thoracic (chest) cavity in a hernia, it still remains an abdominal organ.

It is also important to remember that several back structures including vertebrae, nerves, muscles and ligaments exist in the abdominal cavity but are often considered under the back or posterior abdominal wall. 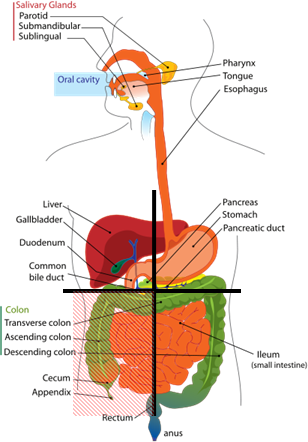 What is a bloated abdomen?

Bloated abdomen is a term that refers to more than one entity – one one hand it is commonly used to indicate visible abdominal distension that typically occurs with gas accumulation but on the other handed it also describes a sensation of being “full” and uncomfortable typically after eating. Similar terms include bloated stomach, indigestion and abdominal bloating.

Sometimes it can be associated with fluid accumulation in the abdominal cavity, a condition known as ascites, but in this case it is commonly referred to as abdominal swelling. However, many people cannot differentiate between bloating due to gas or swelling. In some rare instances, a tumor (usually benign) can grow into a very large mass that cause distension of the abdomen.

Ideally a person should differentiate between distension (enlargement) and a sensation (bloated). The most common causes of abdominal distension includes :

It is important to note that excesive gas in the gut does not usually cause abdominal bloating as is often thought. This gas is usually passed out as flatus or a belch. Furthermore the abdominal wall, and particularly the abdominal muscles, prevents expansion unless there is significant fluid or space-occupying mass within the abdominal cavity. Nevertheless many people with conditions like irritable bowel syndrome (IBS) experience abdominal distension with associated gas (flatus) build up. This may be due to functional bloating rather than gas.

The seriousness of a bloated abdomen depends on whether it occurs suddenly or slowly, causes severe discomfort or pain, associated with other non-abdominal symptoms and the events that may have preceded its onset.

An abdominal ultrasound further supported with an abdominal X-ray can often help to isolate possible causes. Further investigations such as a CT scan or MRI will provide better clarity and may need to be followed up with an upper GI endoscopy or colonoscopy in gastrointestinal conditions. Sometimes the abdominal cavity needs to be viewed without imaging studies like a CT or MRI. This may require a laporotomy for abdominal causes of unknown origin. It is a surgical procedure where the abdomen is opened and viewed by the surgeon (open laparotomy) or through keyhold surgery (endoscopic laparotomy).