The color, volume and consistency or shape of stool varies from person to person. It is generally accepted that the normal stool is :

Normal bowel movement color may vary between different shades of brown. Stool may also be reported as being yellow-brown in color. The typical color of stool is due to stercobilin and urobilin, two derivatives of bilirubin, which are transformed by air and bacteria in the gut. Without these components, bowel movement may appear pale to almost white in color.

Bilirubin is a byproduct of red blood cell breakdown. Red blood cells are constantly being removed and replaced in the circulation. When damaged or destroyed, the components of these blood cells has to be processed by the liver. Bilirubin is a result of this processing and it is then passed out from the liver into the bile. The bile, which is usually a yellow to green color, is then stored in the gallbladder.

Bile is released into the small intestine especially when fatty foods are consumed. It helps to emulsify fats for easier digestion. This also allows the gallbladder to empty its bile which will be expelled with the stool. However, some of this bile is reabsorbed from the gut back into the bloodstream. The remaining bile is broken down into stercobilin by the bacteria in the bowel. It is this stercobilin which is largely responsible for the brown color of bowel movement.

Foods and drinks with strong colorants and dyes should first be excluded as a possible cause of changes in stool color.

The causes of other changes in stool color are discussed under the respective articles.

The Bristol Stool Chart (below) defines 7 types of stool which may be seen in normal and abnormal bowel movements. This is discussed further under the different types of feces. About 70% to 75% of stool weight is due to water and the remaining amount is solid matter composed of a number of constituents as discussed under Feces Composition. 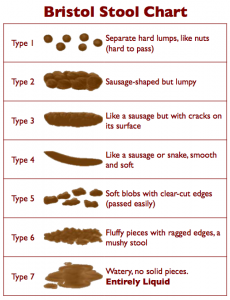 Therefore the amount and frequency of normal bowel movement can be defined as a bowel movement at least 3 times a week, but not exceeding 3 times a day with a total daily volume that is less than 200ml or 200g.