A tumor within the brain compartment of the skull (cranium) often concerns most people but not all tumors are cancerous. Nevertheless these non-cancerous tumors can sometimes be very serious and even lead to life-threatening complications when it is large and presses against other parts of the brain. An acoustic neuroma is one such type of benign tumor that is not serious in most cases but can sometimes be deadly.

What is an acoustic neuroma?

An acoustic neuroma is a benign (non-cancerous) tumor that grows from the outer insulating layer around the vestibulocochlear nerve (eight cranial nerve), which plays a role in hearing and maintaining balance. It is also known as a schwannoma because it develops from the Schwann cells that are responsible for insulating the nerve. Although it is slow-growing, it can sometimes grow rapidly and become large enough to press surrounding structures of the brain.

Acoustic neuromas are relatively rare and diagnosed in only about 1 in 100,000 people. A study based on autopsies suggests that it may be much more common especially among the elderly. However, most of these tumors are so small that it never causes any symptoms and is not diagnosed during life. Some forms of acoustic neuromas may be associated with neurofibromatosis type II (NF2).

Nerve cells are known as neurons. It is made up of a long axon that connects to the cell body (soma) from which a network of protrusions know as the dendrites extend. Around the axons are an insulating layer known as the myelin sheath that allows the nerve impulses to properly travel through it. This sheath is composed of protein and fats produced by the Schwann cells.

Tumors arise as a result of abnormal growth. It can occur anywhere in the body and may be benign (non-cancerous) or malignant (cancerou). There are many different mechanisms present to ensure that growth is properly regulated. Growths from the Schwann cells are known as schwannomas and an acoustic neuroma is one such schwannoma. The rate of growth can vary and acoustic neuromas may be classified as: 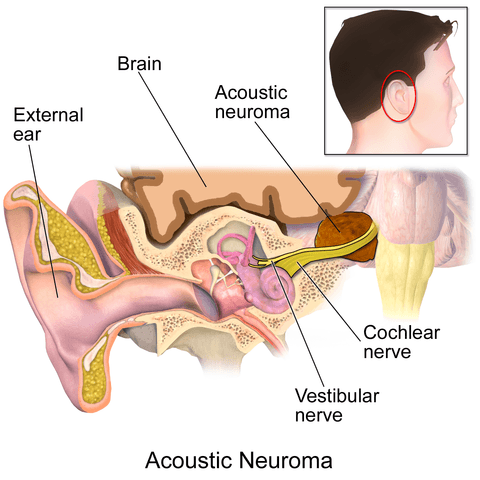 As a result of its growth, acoustic neuromas may press on the vestibulocochlear nerve. The degree of compression correlates with the severity of symptoms. In addition, the mass may also affect surrounding tissue and cause a host of other symptoms. For example, a larger mass may:

Exposure to ionizing radiation is a known risk factor and while it acoustic neuromas are linked to genetic abnormalities, the exact cause is unclear.

In some cases (about 5%) an acoustic neuroma may be linked to the inherited condition known as neurofibromatosis type II (NF2).  It is due to a genetic malfunctioning on chromosome 22. As a result the regulation of the Schwann cell is impaired leading to tumors like acoustic neuromas. However, this accounts for the minority of cases of acoustic neuroma and in most instances the exact cause of an acoustic neuroma remains unknown.

The vestibulocochlear nerve is responsible for carrying signals about sound and equilibrium to the brain where it can be perceived. Therefore any disruption of this nerve will lead to symptoms related to hearing and balance.

Hydrocephalus and pressure on the brainstem can be life-threatening but this is rare and mainly seen with large tumors.

Although hearing tests may be done to assess the degree of hearing loss, it cannot confirm a diagnosis of acoustic neuroma. Imaging studies like a magnetic resonance imaging (MRI) and computed tomography (CT) scan is necessary to identify the presence of the tumor. Very small tumors may be difficult to diagnose due to the size of the growth. Regular scans, every 6 to 12 months, are necessary to monitor the growth of the tumors particularly in cases where there is no treatment that is immediately necessary.

Treatment for an Acoustic Neuroma

The treatment of an acoustic neuroma depends on multiple factors including the size of the tumor, symptoms, rate of growth of the tumor and age and health status of the patient. A very small tumor that is not growing or growing slowly and not causing any symptoms may not be immediately treated. Instead it is constantly monitored. When treatment is considered, then it involves either radiation therapy or surgery.

Radiation therapy kills off some of the tumor cells and may stop or slow down growth. Surgery on the other hand removes the tumor if successful and recurrence of an acoustic neuroma is uncommon.

Surgical removal of the tumor may at times be the preferred option. To gain entry into the skull the incision and removal of a portion of the bone of the skill may be made at the back of the head, behind the ear or above the ear canal. Sometimes only a portion of the tumor can be removed. Newer endoscopic techniques allows for a small camera with a light to be inserted into the cranium where the tumor can be seen and removed.