Analgesics, commonly referred to as painkillers, are the most widely used drug globally. Although many of the more frequently used analgesics are safe to use in moderate doses over a short period of time, prolonged analgesic use can lead to a host of adverse effects on the body. This is not limited to any specific organ or system but the kidneys are commonly injured or even permanently damaged in these cases.

At times this occurs in the backdrop of pre-existing kidney disease due to other causes but kidney damage with the excessive use of painkillers can occur even in a previously healthy kidney. Greater understanding of the impact of analgesics has limited the ease of availability of the more harmful drugs but nevertheless the dependence on analgesics for even minor ailments continues globally.

What is analgesic nephropathy?

Analgesic nephropathy is a form of kidney disease caused by the prolonged or uncontrolled use of painkillers. Analgesics are any drug that relieves pain whether through reducing inflammation or blocking nerve impulses. Nephropathy is a broad term for any type of kidney disease. The damage may occur in both kidneys simultaneously or only one kidney may be more affected.

Analgesic nephropathy does not occur overnight. Evidence suggests that daily use of analgesics over 3 years (6 or more pills per day) to 6 years (3 to 4 pills per day) is more likely to lead to analgesic nephropathy. However, even in these instances not every person may be affected within this time period. It is also important to note that in many of these instances, analgesic use was due to self medicating without strict supervision by a medical professional.

There are instances of acute kidney failure that arises suddenly with sometimes only one large dose of an analgesic or constant high doses for less than 10 days.

Nephropathy induced by exogenous (external) substances can be caused by  prescription medication, herbal remedies, environmental toxins and other mainly ingested substances. Analgesic nephropathy is caused by painkiller combinations containing more than one active ingredient. Although some of these painkillers are non-steroidal anti-inflammatory drugs (NSAIDs), these types of drugs can cause a different pattern of kidney injury which is termed NSAID-associated nephropathy.

A person with pre-existing kidney disease is more likely to develop analgesic nephropathy. Heart failure and dehydration are other risk factors. However, there are certain groups that have been identified as being at a higher risk mainly since they are more likely to overuse analgesics. This includes people suffering with :

How Do Painkillers Damage The Kidneys?

Painkillers cause a specific pattern of kidney damage. It is important to have a basic knowledge of kidney function to understand this pattern of damage. The kidney is a bean-shaped organ with tiny structures known as nephrons that filter the blood. These nephrons are tiny structures that have a head (glomerulus) and long tube-like body (tubule). Blood is filtered at the glomerulus ensuring that only fluid containing a wide range of substances passes into the tubule. Blood cells remain within the vessels. 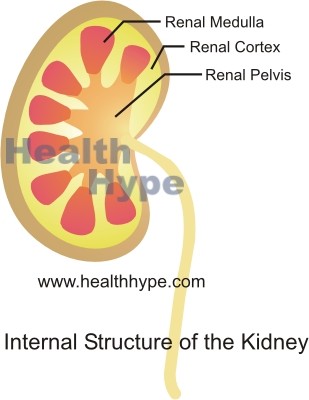 As the fluid passes through the tubule it undergoes various processes that causes an exchange of fluid and substances with the tissue around the tubule known as the interstitium. In this way the kidneys can conserve essential fluid and substances or pass out excess fluids and wastes. The final fluid is urine and it passes from the tubules through various collecting ducts into the renal pelvis. From here it empties into the ureters to pass into the bladder.

Prolonged use of analgesics first injures the renal papillae – the area where urine filters out of the collecting ducts towards the renal pelvis. It causes death of this tissue – papillary necrosis. This tends to occur with low water volume. The tubule and tissue surrounding it, interstitium, also becomes inflamed – tubulointerstitional nephritis. Phenacetin breaks down into acetaminophen. This causes the cells to lose glutathione, an important antioxidant that protects cells from free radicals. Aspirin blocks the actions of prostaglandins which would increase the blood flow to the tissue. The reduced blood flow leads to ischemia – a type of tissue damage.

Analgesic nephropathy is a progressive condition meaning that it gets worse over time. Some patients with analgesic nephropathy may have transitional papillary carcinoma of the renal pelvis – a type of kidney cancer. It has not as yet been conclusively proven that it is the use of the analgesics that causes this type of cancer by acting as carcinogens (cancer-causing substances).

Initially there is no symptoms that indicate an underlying disorder. Patients with analgesic nephropathy are at a higher risk of developing kidney stones and urinary tract infections. This may be the only indication that there is some underlying kidney problem. The urine may reveal hyposthenuria (inability to concentrate the urine), proteinuria (protein in the urine) and sometimes hematuria (blood in the urine) as small chunks of the necrotized papillae is excreted. Chronic kidney disease symptoms which may eventually become apparent and are not specific for analgesic nephropathy includes :

Once analgesic nephropathy is diagnosed, certain measures may need to be implemented in the hope of reversing the condition. This includes :

Although analgesic nephropathy can be stabilized or even reversed, it eventually reaches a stage where kidney function is impaired to such a degree that a kidney transplant is necessary. Dialysis filters the blood removing the toxins from the bloodstream until transplantation can be carried out.