Lower right side pain may be due to a host of causes but appendicitis is often suspected with severe pain in this quadrant. It can be a serious and even life-threatening condition that required emergency medical attention. Surgery is often performed to remove the appendix. Although death from appendicitis is rare these days, it is nevertheless a possibility and appendicitis should always be treated as a medical emergency.

Appendicitis is the medical term for inflammation of the vermiform appendix, the tube-like projection from the cecum of large intestine. It is usually arises with a blockage that allows bacteria within the appendix to multiply and infect it. If left untreated, the appendix can rupture and the infection may then spread in the abdominal cavity. Therefore appendicitis is treated as a medical emergency can can be life-threatening.

There are about 250,000 cases of appendicitis reported every year in the United States. It tends to be slightly more common in teens and young adults, with men more commonly affected than women. However, appendicitis can also occur in childhood and even in senior citizens although it is quite uncommon in the latter group. Surgery is required to remove the appendix. 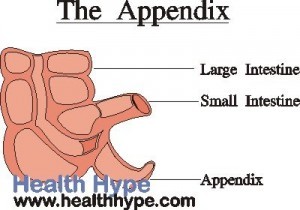 The vermiform appendix is an elongated pouch that communicates with the lumen of the large intestine. Mucus, fluids and bacteria enter and exit the appendix on a constant basis. The exact function of the appendix is still unknown. It is believed to be a reservoir of ‘good’ bowel bacteria. Appendicitis appears to be linked to an obstruction of the appendix, which in turn may be due to a host of different causes although sometimes it is not always apparent.

Inflammation of the appendix wall may occur in conditions like inflammatory bowel disease (IBD). This inflammation leads to swelling of the wall which leads to a blockage. Any bowel condition that may present with constipation can also be a cause as the feces does not move through the large intestine. Another possible cause is a fecalith (a stone-like structure formed by fecal particles and calcium salts) which is more commonly a problem in the elderly.

Less commonly parasites, tumors and foreign bodies can cause the obstruction that may progress to appendicitis. In most cases appendicitis is considered to be an acute emergency and requires surgery. However, in a minority of cases the inflammation can resolve spontaneously. There is also the risk of recurrence in these cases. In rare instances appendicitis can be chronic where symptoms may be present for 3 weeks or more without complications arising.

The signs and symptoms of appendicitis are often inconsistent. Naturally the intensity of symptoms is related to the severity of the inflammation. Appendicitis may be misdiagnosed in as many as 20% of cases and as much as 2 out of 5 appendectomy (appendix removal surgery) cases reveals no problem with the appendix. Various diagnostic investigations may be necessary to confirm that the signs and symptoms are due to appendicitis.

Appendix pain arises suddenly. Lower right abdominal pain is considered to be typical of appendicitis. It usually starts at the navel and then gradually shifts to the right lower quadrant (RLQ). The pain worsens with movement like when walking and even with coughing.

There are a host of other signs and symptoms that typically accompany appendicitis. Nausea, vomiting and changes in bowel habit like constipation or diarrhea are often present as well. There is usually a low-grade fever, abdominal bloating and loss of appetite.

WARNING: Appendicitis is a medical emergency. Even if all the symptoms are not present, treatment should never be delayed when appendicitis is suspected.

Apart from the presence of the above mentioned symptoms, tenderness in the right lower quadrant and McBurney’s point with pressure are usually sufficient to reach a diagnosis. This should be followed up with additional investigations like an abdominal ultrasound, x-ray or computed tomography (CT) scan where possible. Blood tests may be done to confirm the presence of an infection.

Due to the close proximity of the kidneys and similarity of symptoms with a kidney infection, it may be necessary to conduct a urine test as well. Gynecological conditions also needs to be excluded as a possible cause of the symptoms in women. Ectopic pregnancy is another medical emergency and should be considered in teen girls ad women who present with symptoms similar to appendicitis.

Antibiotics is usually prescribed to reduce the severity of the infection and prevent post-operative infections. Even with the latter indication, the antibiotics may be commenced prior to surgery. Analgesics may also be prescribed prior to surgery to help control the pain. It is also usually prescribed post-operatively to manage the pain until it subsides. There are no dietary or lifestyle changes that can be used to manage appendicitis. Immediate medical attention is necessary and should never delayed.

There is no medical cure for appendicitis. Surgery is necessary although in rare instances the appendicitis may resolves spontaneously. Surgical removal of the appendix is known as an appendectomy or appendicectomy. The procedure may be performed as open surgery or as laparoscopic surgery. The latter is preferred since it minimizes post-operative complications and the recovery time is faster.

However, there are times where open surgery is necessary like when the appendix ruptures and the infection spreads within the abdomen. Sometimes the removal of the appendix is delayed like when there is an abscess. In these cases the abscess needs to be drained and drainage tube may be inserted to ensure that it fully drains out. The surgery to remove the appendix follows thereafter.