Argyria is a condition caused by prolonged contact with silver or consuming silver in food and fluids. Less commonly, excessive and prolonged use of drugs containing small amounts of silver may also lead to agyria, as well as the use of silver during certain surgical and dental procedures. The exposure to silver can be seen as discolored patches on the skin blue-gray to gray-black in color. The mucous membranes lining the eyes (conjunctiva) and inside of the mouth (oral mucosa) may also have this discoloration. Overall argyria is a rare condition in this day and age and usually does not have any serious health effects beyond the skin discoloration. It is nevertheless important to understand that in very large doses, silver ingestion can be fatal.

Silver is a naturally occurring element in the body but is present at levels of approximately 1 milligram (mg). Argyria can be localized or generalized. Localized argyria is where the effects of the silver are isolated to the point of contact. Generalized argyria is where the silver is distributed throughout most of the body and then affect several areas or the entire body simultaneously. It usually takes between 5 to 40 grams (g) to cause generalized argyria. The greater the exposure and intake of silver, the more pronounced the effects of argyria. The condition is irreversible and the discoloration is permanent. Fatal doses of silver vary between 50 to 500mg/kg of body weight.

Argyria that is isolated to a single area or at multiple diffuse sites is usually a result of external contact with silver. Here the silver makes direct contact with the skin, the eyes or the mouth but it is not ingested. Although small amounts may enter the bloodstream through the mucous membranes, it is usually not to extent as ingesting silver. Localized argyria is more commonly a result of contact with cosmetics, skin care applications, acupuncture needles and even fillings within the mouth. However, the more likely cause is in the occupational setting where a person is handling silver or chemicals containing silver. Occupational exposure can also lead to generalized argyria.

Silver can enter the bloodstream through the gut when it is ingested. It can also enter through the mucous membranes of the eyes and mouth but usually only small doses of silver enter the circulation in this way. Once it is in the bloodstream, the silver binds to blood proteins and can then travel throughout the body. Most of the silver is excreted in the feces and urine. However, considerable amounts of silver are retained in the body especially if it is consumed in large amounts and ingested over a period of time.

Although it is distributed throughout the body, more silver is deposited in the tissues of the skin, liver, spleen and adrenal glands. Discoloration of the skin is not in isolated patches like with localized argyria but is present throughout the body. Most cases of generalized argyria are due to occupational exposure, long term and excessive consumption of drugs containing silver salts and the use of dietary supplements like colloidal silver. 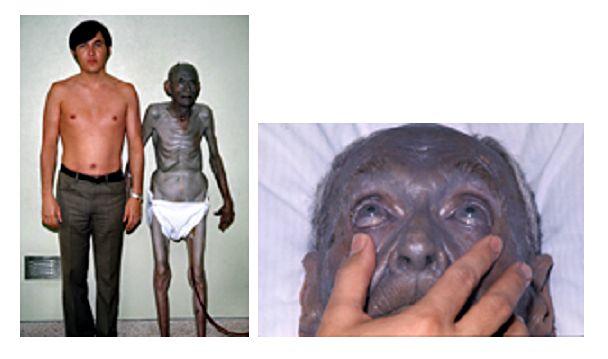 It is important to note that although argyria is caused by silver, the development of this condition depends on the duration of exposure to silver, as well as the quantity involved. Therefore not every person who is exposed to silver will develop argyria. Furthermore, it has been proposed that there is a genetic susceptibility component to argyria. This may mean that some people are more likely to develop argyria than others due to the presence of certain genes.

Silver and silver salts in the following substances may cause argyria.

Although argyria is a rare condition these days, it has been thrust into the spotlight due to the use of colloidal silver. A well known compound in the alternative therapy and health product market, colloidal silver is touted for its use in a range of diseases from arthritis and diabetes to cancer, HIV/AIDS and herpes infection.  Most of these claims are unsubstantiated although silver may have some antimicrobial effect. Nevertheless colloidal silver continues to  reemerge every now and then in the health product market as a ‘cure all’.

Apart from the easy access to these substances on a commercial basis, there are many instruction guides and devices for making colloidal silver in the home environment. This has contributed further to its unrestricted use as a dietary supplement. Most users are ignorant to the fact that colloidal silver can cause argyria. It is dependent on the duration of exposure and quantity consumed. Although argyria usually has not serious health consequences beyond skin pigmentation, colloidal silver is not a ‘natural remedy’ that is completely safe and without side effects.

The intensity of the symptoms of argyria depends on the duration and the quantity of silver exposure.

The primary symptom of argyria is discoloration of the skin. It is usually a slate gray, metallic or blue-gray discoloration. In rare instances some isolated spots in direct contact with silver may have an almost blackish hue.This discoloration is also evident on the sclera (whites of the eye) and the nail bed.

The pigmentation is most noticeable in the sun exposed areas of the body. It is unclear whether discoloration is directly from the silver granules in the upper dermis or a chemical reaction between the silver, skin proteins and sunlight.

The internal organs (viscera) may have a blue discoloration when visualized during surgery or in an autopsy. It is usually the liver, spleen and gut that have the most pronounced bluish discoloration.

Black tears are a rare symptom of argyria, particularly when the conjunctiva (clear lining of the eye) is affected. The medical term for black tears is melanodacryorrhea.

The characteristic symptoms of argyria along with the a medical history that may indicate the source of silver exposure is usually sufficient for a diagnosis of argyria. However, further testing is advisable to exclude other diseases which cause a blue discoloration of the skin, like ochronosis. The main tests include :

As yet there is no effective treatment for argyria. The skin pigmentation is permanent and it has a pronounced psychosocial impact on the patient.  Some of the therapies and that are still utilized despite its limited effectiveness includes :