Most people only realize the extent of the arm injuries related to prolonged computer use once pain arises. However, the problem may have start days, weeks or even months prior. The extent of the problem depends on several factors. Pain alone is not a reliable indicator of the extent of the injury. These types of injuries are usually repetitive stress injuries. This simply means that the injury has arisen from repeated stress and strain as opposed to acute injuries where a sudden severe blow or strain is responsible.

Even though it is the hands and fingers that does most of the work when using a computer, the other parts of the upper limb are also active. For example, the hand is held in a certain position at the wrist which requires the use of muscles in the forearm. Similarly the forearm is held in a position by the upper arm by bending it at the elbow. Since most of us do not keep our arms suspended in the air while using a computer keyboard or mouse, the forearm and part of the hand may rest on a desk or some other hard surface which can also cause injury. 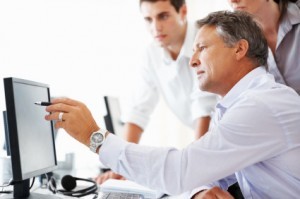 Cause of Computer Arm Problems

It is important to look at the causes in terms of the types of different arm problems that computer users may experience. Many of the symptoms are similar and while pain is common in most of these conditions, it may not always be present or prominent. Similar conditions that arise from the neck or upper back are further discussed under cervical radiculopathy.

Carpal tunnel syndrome (CTS) is one of the most common hand-related problems associated with computer use. It arises when the median nerve, which supplies the hand, becomes compressed as it passes through a bony tunnel in the wrist. While carpal tunnels syndrome is often seen with prolonged computer use, there is no conclusive evidence that there is a link. It is thought that different causes of hand pain associated with long periods of computer use may often be mistaken for carpal tunnel syndrome.

Symptoms of carpal tunnel syndrome include:

Cubital tunnel syndrome is a lesser known arm problem which arises when the ulnar nerve is pinched at the level of the elbow. The exact link between cubital tunnel syndrome and prolonged computer use is not always known. It may be associated with long hours of bending the elbow to position the hand over the keyboard, or with resting the elbow at an awkward spot that compresses the ulnar nerve. The nerve can also “slip” from its normal position with repeated bending and straightening of the arm at the elbow joint.

Symptoms of cubital tunnel syndrome include:

Writer’s cramp known by the medical term mogigraphia is a condition that does not receive as much attention. It is mainly associated with writing for long periods of time but typing can also cause it. Writer’s cramp is mainly a problem where the muscles of the forearm go into involuntary spasm and the coordinated relaxation and contraction of muscles is impaired. It is a task-specific focal dystonia. Apart from writing and typing, any repetitive hand movement can lead to writer’s cramp.

Symptoms of writer’s cramp include:

Ways to Prevent Arm Problems with Computer Use

While there are a number of treatment options for each of the conditions mentioned above, these conditions should ideally be avoided as far as possible. It is important to note that serious complications can arise over time if the condition is left untreated and eventually surgery may be required. Prevention should be the focus for every person who uses a computer for prolonged periods of time on a daily basis especially when it is an occupational requirement and can therefore not be avoided altogether.