Babesiosis refers to a malaria-like illness caused by the parasite Babesia. It is transmitted from animals to humans by various ticks. Babesia species of protozoan parasites infect cattle, horses, dogs, cats, and mice – humans are opportunistic hosts. Humans get this zoonotic infection incidentally, when bitten by adult ticks or nymph. Individuals with babesiosis may not show any symptoms. However, babesiosis can severely affect the elderly or other people without spleen with a weak immune system. It may even lead to death.

Babesiosis is a zoonotic disease, which means it is transmitted between animals and humans. Ticks are the vectors for the Babesia parasite meaning that ticks pass the parasite from one animal to another. Cattle and other animals are transport hosts and humans may act as reservoirs. Different species of the genus Ixodes ticks act as the primary vectors of the parasite. In the United States, Ixodes scapularis species or the deer tick is found. I.scapularis completes its life cycle in three forms: 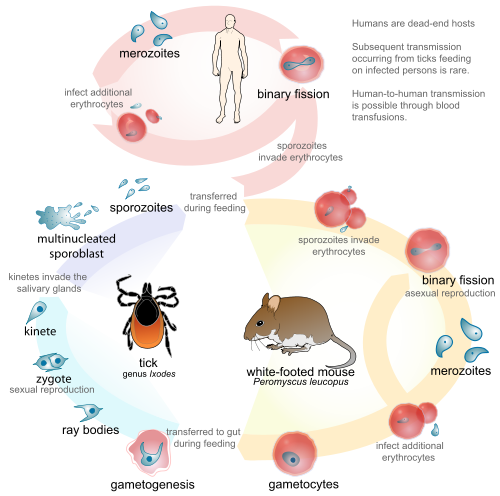 How is babesiosis spread?

All three forms require a blood meal to develop into the next form. In the form of larva and nymph, the tick feeds on mice, whereas as an adult tick feeds on deer. The ticks get Babesia by feeding on an infected animal. The parasite then multiplies in the gut wall of the ticks and gathers in their salivary glands. When the tick feeds on a new host, the parasite is transferred with the saliva.

Babesia parasite in the human body

The parasite affects red blood cells (RBCs) of the infected animal or human. Here it turns into a trophozoite, an active and feeding form, which absorbs nutrients from the host. Trophozoites divide to form 2-4 merozoites. When meorzoites leave the RBCs, they damage the membrane of red blood cells.

The spleen tries to trap the infected red blood cells, which are then destroyed by immune cells called macrophages. This explains why people without a spleen or weak immune system are more severely affected by babesiosis. 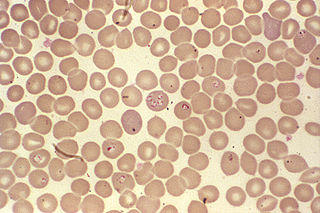 Picture of the babesia parasites in the blood from Wikimedia Commons

Babesiosis may have symptoms similar to those of malaria as in both diseases, the causative parasites affect and damage red blood cells. Healthy individuals may not show any symptoms, however in some people babesiosis can be fatal.The incubation period after the tick bite is 1 to 3 weeks. During this period there are no symptoms although the parasite is damaging red blood cells and multiplying within the body. After this time, the following non-specific initial symptoms of babesiosis are seen:

Babesiosis infection is caused by Babesia parasites. It is transmitted from animals to humans through a tick bite. In the northeastern and mid-western parts of United States, human infection with Babesia is mostly transmitted from mice. Mice are the primary reservoir. After feeding on infected mice, the tick larvae also become infected. The tick larvae then develop as nymphs in 1 year. Infected nymphs transmit Babesia to other mice or a human host. Adult ticks on deer may also infect these animals and transmit it to humans.

A person is more likely to contract babesiosis in certain instances such as :

Babesiosis presents with malaria-like illness symptoms, however, it can be quite difficult to diagnose. It is a fairly uncommon condition and thorough medical history may raise suspicion, especially in areas that can be considered to be endemic regions. Various tests that may be useful for diagnosis are:

Treatment aims at providing relief from symptoms, preventing complications, and eradicatingthe infection. Usually, treatment is not required in case of otherwise healthy patients, who do not show any symptoms. However, elderly, immune-compromised, or asplenic (without a spleen) patients should be treated immediately.

Antibiotics and anti-malarial drugs are given to clear the parasitic infection. A combination of clindamycin and oral quinine is recommended in majority of the cases. Side-effects of this combination may include tinnitus, difficulty hearing, and diarrhea. A combination of atovaquone and azithromycin is effectively treats mild-to-moderate Babesia infections in patients who do not respond well to clindamycin-quinine.

Blood transfusion is needed in severely infected patients as RBCs break down in babesiosis.

Excessive breakdown of RBCs can lead to many complications. The main complications may include the following:

Since the spleen clears infected red blood cells, in patients without a spleen this mechanism is not present. Due to this reason, infection spreads rapidly in such individuals. Massive red blood cell destruction affects oxygen distribution throughout the body. This increases the risk of a heart attack and heart failure. Babesiosis can also cause severe kidney complications and even kidney failure.

In the United States, the prognosis for babesiosis is excellent. About 50% of children and 25% of adults infected with Babesia do not show any symptoms and improve on their own without treatment. Death occurs in about 10% of US patients with babesiosis, and is mostly seen in the cases of elderly or asplenic patients. The role of weakened immunity with conditions like HIV/AIDS may play an important role in death due to babesiosis.