A host of stomach conditions can cause pain and less commonly cramps as well. However, identifying pain in the stomach region as arising specifically from the stomach is often difficult without considering a person’s medical history, other symptoms and results of different tests. Bad stomach pain or cramping is distressing and at times even be debilitating, affecting a person’s daily functioning and even level of nutrition in some cases. Understanding the possible causes of bad stomach pains or bad stomach cramps and identifying other features which may provide a better indication of the cause is therefore imperative for rapid and effective treatment.

What is a bad stomach?

The term ‘bad stomach‘ is not a specific diagnosis. It is a common term used to describe gastrointestinal symptoms as well as pain or cramps arising in the left upper quadrant of the abdomen. This includes pain under the left ribcage as most of the stomach is tucked under the lower part of the left ribcage. The stomach sits at the upper left side of the abdominal cavity surrounded by many organs and structures – both within the abdominal and thoracic cavity. Therefore a host of non-gastric causes may be responsible for what is commonly termed as a bad stomach. Similarly the stomach is just one section of the alimentary tract and conditions of neighboring parts, namely the esophagus and duodenum, may also be mistaken for a bad stomach. 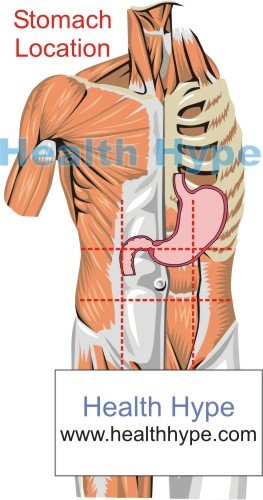 A host of symptoms can be attributed to a ‘bad stomach‘. This includes :

Most of these symptoms worsen or ease after eating food or when hungry. Certain foods may be identified as possible trigger factors for the symptoms but are usually not the cause.

Pain is a distinct sensation that is clearly identifiable to a person although the nature of the pain may vary. It is a distressing symptom that usually serves as a warning signal of tissue damage. Stomach pain may vary intensity but very severe stomach pains, often described as bad stomach pains, occurs due to a combination of the causative factor injuring the stomach wall coupled with the effect of the highly corrosive stomach acid making contact with the wall.

Bad stomach pains may vary from a dull gnawing ache, to a burning sensation or sharp stabbing pains. Although the nature of pain cannot conclusively indicate the cause, more common causes like gastritis and stomach ulcers present with a dull ache or burning pain. More serious causes like a perforated ulcer, Crohn’s disease, late stages of stomach cancer and severe gastric outlet obstruction can cause sharp stabbing pains.

Stomach cramps are non-specific and the term may be used to refer to various different sensations that are distinguishable from pain. The stomach is a muscular hollow organ. These muscle activity breaks down food into smaller particles as a part of mechanical digestion. It also helps churn food in the stomach with enzymes and the acid – chemical digestion. Stomach cramping is due to abnormally strong contractions of the stomach muscles. Most conditions that can eventually progress to stomach pain may initially be present as milder discomfort that is described as stomach cramps although it may not always be due to actual muscle cramping.

This is more likely seen with conditions like gastroenteritis, distention of the stomach with over-eating, irritable bowel syndrome (IBS), gas build up in the stomach particularly with the consumption of carbonated drinks and anxiety (nervous stomach). The term ‘stomach cramps’ may also be used loosely to describe a host of other uncomfortable sensations in the stomach region that is not actual pain.

Causes of a Bad Stomach

There are several stomach conditions that may present with pains, cramps and/or other symptoms described above.

Stomach irritation is common in pregnancy, especially in the first trimester, where morning sickness and adapting to the changes associated with pregnancy can affect many organs. However, stomach ache in pregnancy should not be taken lightly as there are a number of obstetric causes of abdominal pain that could jeopardize the fetus or even the mother’s life. These conditions are discussed under abdominal pain in pregnancy.

Pica, which is the craving for indigestible substances, is not uncommon in pregnancy. Ingesting these substances and overeating may cause a stomach ache. The pregnant uterus which is constantly expanding due to the growing fetus can also press upon abdominal structures and thereby apply pressure to the stomach. This may cause a stomach ache when lying flat, which may be relieved by lying on the side.