The bile ducts are a series of tubes that drain bile from the liver and either direct it to the gallbladder for temporary storage or pass it into the duodenum where it can be expelled with the feces. The biliary tree as it is known has many different parts, all of which serve the same function, and are prone to a number of diseases that can ultimately affect the liver, gallbladder and/or pancreas. The gallbladder is actually part of this biliary tree but it is often considered separately as an organ on its own.

Bile is produced by the hepatocytes (liver cells) which secrete it into the bile canaliculi. These canaliculi are not actual ducts but rather furrows or canals that drain the bile secreted by all the hepatocytes into the smallest of the bile ducts known as the interlobular biliary duct. As the the name suggests, each of these ducts drain a lobule of the liver. Lobules should not be confused with the lobes of the liver. Lobules are not functional units but rather structural arrangements.

The interlobular biliary ducts then drain into the larger collecting bile ducts which merge to form the right and left hepatic ducts.  These ducts in turn unite to form the common hepatic duct. This accounts for the bile drainage from the liver.

The cystic duct,which communicates with the gallbladder, joins the common hepatic duct to form the common bile duct (or known just as the bile duct). The bile duct, which is between 5 to 15 centimeters long, courses behind the top of the duodenum and pancreas until it runs side by side with the main pancreatic duct.

Eventually the bile duct and pancreatic duct unite to form a dilatation known as the hepatopancreatic ampulla (ampulla of Vater). This immediately drains into the duodenum through the major duodenal papilla.

The end part of the bile duct, just before it joins the pancreatic duct, has thick circular muscle lying around it. This forms a sphincter which prevents bile from emptying into the ampulla and subsequently into the duodenum. This sphincter of the bile duct controls the flow of bile into the duodenum and when contracted, it also causes a backflow of bile in the common bile duct, thereby forcing the excess bile to redirect into the gallbladder for storage.

The graphical representation below illustrates the bile drainage. 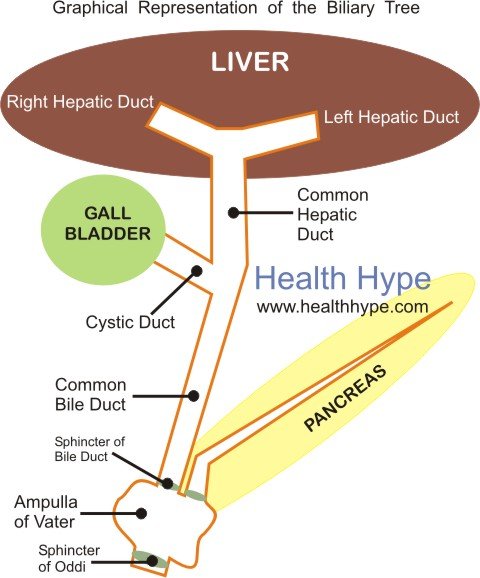 Blood Supply to the Bile Duct