The brain, like every part of the human body, derives its oxygen and nutrients through the the blood that reaches it. This blood is pumped from the heart and travels by way of blood vessels, specifically arteries, to the brain. Waste substances and carbon dioxide are removed from the brain by veins. Although the brain accounts for only 1% to 2% of the body weight, it requires about 20% of the oxygen available in the body. If a blood clot blocks an artery to the brain, then oxygen and nutrient-rich blood cannot reach the brain tissue. While any tissue can sustain itself for a short while with its own nutrient stores, a constant supply of oxygen is needed or tissue death will occur within minutes.

Blood Supply to the Brain 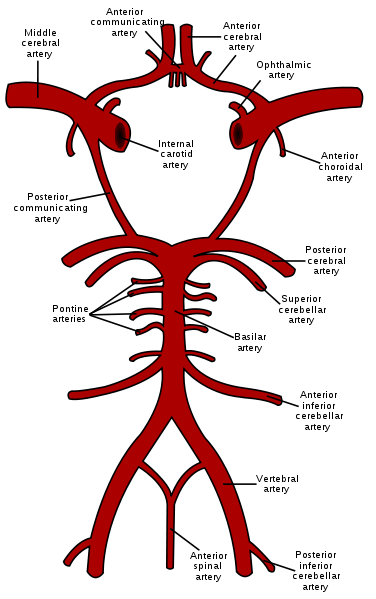 Picture of Circle of Willis from Wikimedia Commons

Blocked Artery to the Brain

Any one of the arteries supplying the brain may be blocked but is more frequently seen in the bifurcation of the carotid artery, middle cerebral artery and basilar artery. This blockage is usually by a blood clot that either forms at the site (thrombus) or dislodges from another site, like the heart, and travels through the bloodstream until it lodges in one of the smaller arteries supplying the brain (embolus). It is more likely to occur if the artery is narrowed possibly due to a plaque as is seen in atherosclerosis or some other less common deformity of the blood vessel or blood disorder.

Lack of Oxygen to the Brain

It is only when the artery is narrowed significantly or even completely that the oxygen deprivation is noticeable. Depending on the extent of the blockage, the tissue may undergo injury due to hypoxia (cerebral ischemia) or there may be areas of tissue death within the brain (cerebral infarct). A cerebral infarction is known as a stroke or cerebrovascular accident (CVA) and when it occurs due to insufficient blood supply, it is referred to as an ischemic stroke. It may also arise with a weak blood supply throughout the body which is known as systemic hypoperfusion.

When there is bleeding (hemorrhage) within and/or around the brain then the blood supply to different portions of the brain is also affected, a stroke can also occur in these instances. This is then referred to as a hemorrhagic stroke. An interruption to the blood supply as is seen with a clot accounts for about 80% of stroke cases and the remainder is due to intracerebral hemorrhage (bleeding in the brain).

Depending on which part of the brain is affected, the signs and symptoms of this tissue damage or death may vary to some degree. It usually presents as muscle weakness or paralysis, loss of sensation (numbness) or abnormal sensations (paresthesia) and difficulty seeing or talking or comprehending (confusion).

How do blood clots form?

Blood has many components that can rapidly aggregate to form a semi-solid to solid plug. This is intended to stop any blood loss when there is damage to a blood vessel. There are several steps in this mechanism to stop blood loss which is known as hemostasis. The most prominent of these phases is the clotting of blood which provides a more long term seal until the blood vessel can repair itself.

A blood clot may arise when there is injury to the blood vessel without any break in the vessel wall. This can be due to damage to the inner lining of the artery seen with conditions like hypertension (high blood pressure) or  atherosclerotic plaques associated with conditions like high blood lipids (hyperlipidemia – high cholesterol or triglycerides). Various other pathologies may also be responsible, like thickening of the blood vessel or blood diseases that cause the blood cells to clump together.

As mentioned, the blood clot may arise within one of the cerebral arteries that are slightly damaged or have an atherosclerotic plaque, or in the backdrop of other diseases. Clots that arise at the site are known as a thrombus and if it causes a cerebral infarction (stroke) then it is referred to as an thrombotic stroke. When the clot is formed at another site, then dislodges and travels through the bloodstream only to obstruct one of the brain arteries, it is then referred to as an embolic stroke.