What is body odor?

Body odor, or B.O. as it is commonly referred to, is a conglomeration of odors from the body’s surface and cavities. In most instances, body odor is thought of as the general odor a person has without using any fragrant scents to mask the natural smell of the skin. It may not be offensive in nature and is sometimes described as pleasant. However, body odor or B.O. is often used as a general term to describe bad body odor.

However, odor from the mouth, vagina and even odoriferous discharges from the body, like in ear discharge, can also be considered as body odor because it contributes to the overall odor from a person. However, there are three areas in paticular that tend to contribute to a bad body odor. This includes smelly buttocks (bum), bad groin odor and offensive armpit odor. However, smelly feet which is a very common problem is often not seen as part of total body odor in the same light as these three other areas.

The skin is naturally odorless. However, perspiration, dust, dirt and topical applications may all contribute to skin odor. Sweat is probably the most prominent contributor because even after bathing and removing other substances from the skin, sweat will return, especially with activity, emotional stress or in hot and humid environments. The body has two types of sweat glands :

Sweat from the apocrine gland is more viscid due to fatty substances within it. The exact function of apocrine sweat is unknown and it is thought to assist with hair texture and may also be a scent gland. Apocrine sweat becomes more prominent from the time of puberty as the secondary sexual characteristics begin to develop. It is secreted in smaller quantities than eccrine sweat and is associated with emotions and hormonal changes.

Sweat, both eccrine and apocrine, does have an odor but it is usually not an offensive odor. It is when the bacteria on the skin consume the substances in the sweat that is on the skin surface that a stronger or foul odor may become noticeable. Body odor is more prominent on the warm, covered areas of the body where the bacteria can thrive. Hygiene plays a crucial role in limiting or preventing a bad body odor.

Excessive sweating (hyperhidrosis) will increase the chances of a foul body odor, especially if it is chronic in nature. An offensive odor associated with sweating is known as bromhidrosis. At other times, a bad body odor may bre related to medical conditions like in :

A bad body odor may not only be due to the odor from the skin. Halitosis (bad breath), bad groin odor and even bad foot odor are all factors to consider in body odor. In close proximity to others, even odors in concealed areas may be detectable. Offensive smelling discharge from any orifice, even the ear, may be responsible for bad body odor.

Most cases of skin odor is associated with break down of the compounds found in sweat by bacteria that live on the skin. Excessive perspiration (hyperhidrosis) will exacerbate this effect as larger quantities of sweat are available for bacterial consumption. Hyperhidrosis may be caused by a number of physiological and pathological factors. A bad odor associated with sweating is known as bromhidrosis. It can be generalized or localized to areas like the armpits.

Causes of a Bad Body Odor

There are various causes of a bad body odor, commonly referred to as B.O. This odor may be foul yet non-spefici while at other times there is a distinctive fishy odor or fecal smell.

Although a foul odor is a general term for any offensive smell, the odor may vary in character and intensity. It may be described by a number of terms, including musty, mousy, fishy, putrid, fetid, fecal or sickening sweet odor.

The causes of foul body odor in general may be due to the following causes :

A fishy odor is often attributed to ammonia. In the body this is related to urea, a nitrogenous compound formed by the break down of protein. A fishy odor is often a result of high levels of urea, as is seen in uremia. This occurs when the kidneys are not able to remove the urea that builds up in the body through urine. Uremia is indicative of kidney disease and patients may even have a fishy smelling breath.

Fishy odors have often been attributed to menses (periods). This may not be a characteristic odor for every woman during menstruation or on every period. When it does occur, it may be associated with poor hygiene (infrequent changing of sanitary pads), obstruction of menstrual blood outflow, vaginal discharges  and a range of vaginal infections.

It is likely a result of  bacteria consuming any menstrual blood or clots, but may also be associated with leukorrhea, which is a thick white to yellow discharge seen with bacterial infections like bacterial vaginosis. Fishy odors may also be seen with UTI’s (urinary tract infections) in both men and women, especially if a urethral discharge is present. Urinary incontinence and post-micturition dribble with appropriate measures taken to change the underwear may be another cause of a fishy odor.

A body odor that resembles feces is often a result of fecal matter being present on the skin surface or clothing. This may be seen with diarrhea, inadequate cleaning after defecation, and in patients who are debilitated, the elderly and those with mental diseases, who are not able to visit a toilet to relive themselves. A possible cause of a fecal body odor is a gastrocolic fistula, where a fecal smell to the breath may be noticed. Patients with a stoma may also have to be monitored if a fecal body odor occurs as it may be a sign of some dysfunction. 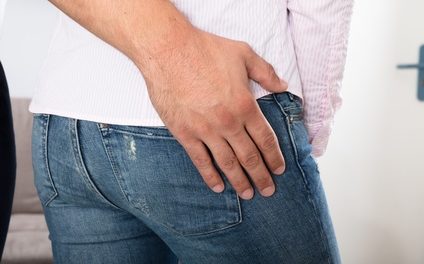