What is bone TB?

Tuberculosis (TB) is a well known infectious disease that mainly affects the lungs (pulmonary tuberculosis ~ lung TB). However, it can affect various other sites of the body and is then referred to as extrapulmonary TB. When it affects the bone, it is known as tuberculous osteomyelitis or simply bone tuberculosis (TB). The weight bearing bones and joints are most commonly affected – the spinal column, followed by the knees and hips. The joints of these bones are also often involved but TB of the joints (tuberculous arthritis) usually has a predilection for the the hips and knees. Other bones and joints, like that of the wrist, hand and elbow may also be affected typically after an injury to these areas.

The bone, with its hard outer surface, is often thought to be impermeable to an infection. However, the inner soft tissue of the bone is just as prone to an infection as with any other part of the body. Bone tuberculosis almost always occurs secondary to an active tuberculous infection in some other organ. It reaches the bone by traveling through the bloodstream (hematogenous spread). At other times it can spread to the bone through direct infiltration from a neighboring site of active infection or through drainage via common lymph nodes. Bone TB is not a common type of bone infection or form of extrapulmonary TB but the incidence in developed nations has increased slightly in the 21st century. It is more likely to occur in immunosuppressed patients, particularly those with HIV/AIDS.

What is back tuberculosis?

Back tuberculosis is an extrapulmonary manifestation of tuberculosis, an infectious disease caused by Mycobacterium tuberculosis bacillus. Tuberculosis of the back is known as tubercular spondylitis or spinal tuberculosis. A common name for this infection is Pott’s disease named after the 18th century London surgeon Percivall Pott who first described the disease. It is a serious infection capable of causing severe deformity of the spine and even lower body paralysis (paraplegia). Back tuberulosis is more commonly seen in a person with pulmonary (lung) TB and HIV/AIDS but alcoholics, the malnourished and the elderly are also high risk groups.

Meaning of Back TB

The spinal column or backbone is made up of 33 vertebrae running from the neck to the buttock. These vertebral bones lie one on top of the other and are separated by a spongy intervertebral disc. Protrusions from the back of each vertebra allows it to form a joint wih the the same processes from the vertebra above and below it. In this way the vertebrae articulates at many joints which accounts for it flexibility. The spinal cord runs within the backbone which protects it. Nerves exit the vertebrae on either side and carry impulses from the brain to the rest of the body.

Pott’s disease is usually a combination of a bone infection (tuberculous osteomyelitis) and joint infection (tuberculous arthritis). It is a secondary infection meaning that the infection spreads to the spinal column from some other affected organ. The lungs are the most common site. The bacteria may either spread through the blood (hematogenous) to the backbone, spread directly from the lung or through local lymph nodes. As the infection progresses, the intervertebral discs are destroyed and collapse and eventually the same occurs in the vertebral bodies. This causes an abnormal curvature of the spine known as kyphosis. Evenetually there nay be compression of the spinal cord giving rise to a number of neurological complications.

Location of Back TB

Pott’s disease usually affects the lower thoracic (mid back) and upper lumbar (low back) vertebrae. In a minority of cases the cervical (neck vertebrae) may be affected. The front (anterior) part of the vertebrae is most commonly affected and the infection extends through the intervertebral disc to surrounding vertebra. It is uncommon for just a single vertebrae to be affected in isolation. Since the anterior part of the vertebral bones are first affected, it is these parts of the vertebral body that collapses once the infection has caused significant destruction of the bone (osseus) tissue. 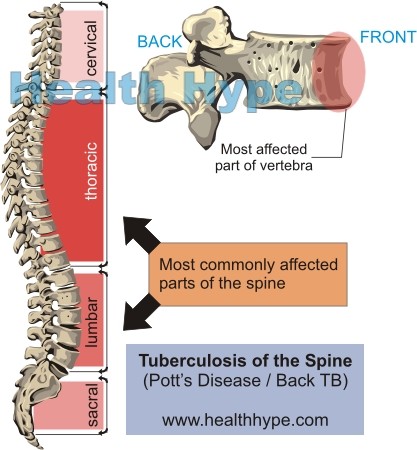 Back tuberculosis is caused by the same pathogen as lung tuberculosis – Mycobacterium tuberculosis. It is usually transmitted by droplet spread when infective droplets are expelled from the airways of an infected person during coughing. These droplets can remain suspended in the air of a closed room for several hours. It may then be inhaled by an uninfected person, travels down the airways to lodge within the lung tissue. However, the immune system quickly responds to wall of the M.tuberculosis bacilli in the lungs thereby halting the infection. This is known as latent TB and the infection can remain suspended in this manner for years, decades or even a lifetime. However, once the immune defenses fail, the infection becomes active again and breaks out from the walled tubercle, rapidly destroying lung tissue and spreading to other organs. Sometimes tuberculosis can be contracted via the gastrointestinal tract or even the skin but these modes of transmission are rare.

Tuberculosis remains one of the most life-threatening infections and it is believed that up to one-third of the world’s population has latent TB. A large proportion of these people will never experience an active infection but the risk increases substantially with certain diseases and living conditions. Risk factors for tuberculosis includes :

These risk factors apply to tuberculosis as a whole and pulmonary tuberculosis in particular. The specific risk factors for secondary infections like Pott’s disease is having pulmonary TB in HIV/AIDS patients, not seeking medical treatment or discontinuing drug therapy prematurely.

Pott’s disease is asymptomatic for long periods of time. The symptoms eventually set in very gradually. The most common symptom is chronic back pain. This is localized to the more commonly affected parts of the spinal column – thoracic and lumbar vertebrae. The pain is typically worse when standing up or when moving. There is tenderness of the affected vertebrae with paravertebral swelling (swelling on either sides of the spine). The pain and joint swelling causes a person to maintain a stiff upright position when standing and walking. Kyphosis is an abnormal curvature of the spine as the intervertebral discs and vertebral bodies collapse. It causes a rounded back or ‘humpback’ appearance.

Other symptoms that may be present tend to arise with tuberculosis and other severe infections at any site in the body. It includes fever, night sweats, loss of appetite and weight loss. Additional symptoms may arise with complications and also depends on which site of the spinal column is affected. About half of all cases of Pott’s disease will lead to neurological complications associated with compression of the spinal column. Neurological symptoms like abnormal sensations (paresthesia), nerve root pain, muscle weakness and paralysis of the lower half of the body (paraplegia) is a severe and late complication. Uncommon symptoms typically associated with TB of the cervical vertebrae includes difficulty swallowing, hoarseness of the voice and torticollis (stiff neck or wry neck).