There is no way of knowing for sure just how many species of bacteria exist in the world but the number is believed to be anywhere between 10 million and 1 billion. Only a small portion of these affect humans. It can cause a range of diseases from a sore throat, to diarrheal illness, bladder infections, brain infections and even spread throughout the body to cause death. One of these bacterial species is known as Campylobacter which is among the most common bacterial infections in humans.

What is Campylobacter diarrhea?

The Campylobacter bacteria can be spread through several routes and is also one of the possible pathogens to cause traveler’s diarrhea especially in areas of south and southeast Asia like Thailand. The infection is usually acute and rarely leads to death. However, people with weakened immune systems and the elderly are at a greater risk of complications particularly if proper medical management is not forthcoming. Dehydration is one of the main concerns as it can lead to fatal complications but this can be mitigated with proper hydration. Antidiarrheal drugs should be avoided because it can worsen the condition. 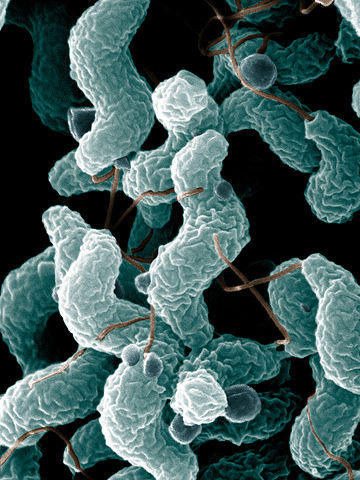 There are several routes by which Campylobacter bacteria can be transmitted.

Although many of these routes like contaminated water supplies are not a concern in developed nations most of the time, it can become a problem during periods of natural disaster. In addition travelers needs to be cautious. Campylobacter bacteria are one of the common microbes responsible for traveler’s diarrhea that is often transmitted to travelers through contaminated food and water.

The number of bacteria that needs to be ingested to cause disease can vary from just 100 bacteria to 10,000. This is known as the infectious dose. Normally a dose of 10,000 of more bacteria are needed to cause illness in people who are relatively. However, a lower infectious dose can cause disease in certain people. In other words relatively small doses could cause an infection. Most of the time the stomach acid can destroy these bacteria but this can be a problem for people who are taking acid-suppressing medication.

Not all Campylobacter infections will cause symptoms. However, with regards to Campylobacter diarrheal ollnesses the symptoms are largely the same irrespective of which Campylobacter species causes the bowel infection. The incubation period varies from 1 to 7 days. This means that during this time there are no symptoms despite the bacteria having gained entry into the body. The variation in the time period is most likely related to the infectious dose – meaning that a higher infectious dose will have a shorter incubation period.

The signs and symptoms of Campylobacter enteritis includes:

Campylobacter diarrhea rarely lasts for more than one week. However, the illness can be longer in the elderly and people with weakened immune systems. Some people experience relapses over several weeks. Prompt medical treatment, adequate hydration and avoidance of behavior, foods or fluids that may have caused the infection is essential to shorten the duration of the illness.

As with any diarrheal illness, proper hydration is essential to avoid complications like dehydration which could turn deadly. Oral rehydrating solutions (ORS) is the best choice as it contains the correct balance of fluid and electrolytes to ensure adequate hydration without exacerbating the diarrhea. If oral hydration is insufficient to prevent dehydration then intravenous (IV) fluid administration is necessary.

The use of medication for Campylobacter diarrheal illness is not always necessary. In fact anti-diarrheal drugs like loperamide should be avoided. It can worsen and prolong the illness thereby increasing the risk of severe dehydration and the spread of bacteria into the bloodstream (bacteremia). Even antibiotics to eradicate the bacteria may not be required.

People who are immune compromised, pregnant, do not show any signs of improvement or resolution of symptoms, where the fever is very high or the diarrhea is bloody will probably require antibiotics.