Lymph nodes are located throughout the body with each group being responsible for draining a particular area. The common lymph nodes that swell are found in the neck (cervical), armpit (axillary), and groin (inguinal), as well as in numerous other areas of the body.

There are about 10 lymph nodes that collectively form the group known as the superficial lymph nodes. They drain the skin and subcutaneous tissue (which lies just beneath the skin) of the lower abdominal wall below the level of the umbilicus, gluteal region (buttocks), perineum, lower part of anus, external genital organs and the leg. 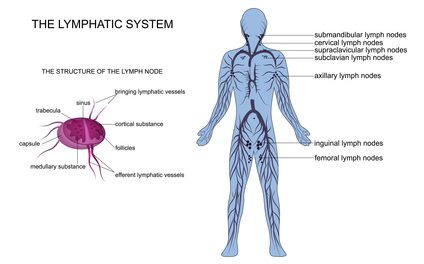 The superficial lymph nodes are more likely to be felt and even seen when swollen. However, when not swollen it is usually not visible or palpable. Nevertheless it is constantly functioning to filter lymphatic fluid, neutralize infectious agents like bacteria and even isolating and destroying abnormal cells that are potentially cancerous.

Many forms of cancer occurring within the area drained by the groin lymph nodes will lead to swelling (lymphadenopathy). Lymph node swelling usually occurs due to malignant tumors.