Mucus is produced the entire length of the digestive tract as well as the respiratory tract but most of the time we do not notice it. The color, consistency and volume of mucus can vary to some extent but when it becomes excessive it can be both annoying and uncomfortable. Excessive mucus can even impair out quality of life when it congests spaces like the nasal cavity thereby making it difficult to breathe. When this mucus is coughed up we usually refer to its phlegm or sputum.

Is it possible to choke on mucus?

Choking is where the airways become blocked and airflow in and out of the lungs is obstructed. If the cause of choking is not removed then it can lead to death. Most of the time choking is caused by a foreign object being lodged in the airway. It can be either a large piece of food (more common among adults) or a non-edible object like a coin or tiny ball (more common among children). Even if it does not block the airway the subsequent swelling of the airway tissue around the object may lead to complete occlusion.

Sometimes excessive mucus in the airways may produce a sensation of choking but it does not completely obstruct the airways like in choking on a foreign body. While the sensation may cause anxiety over the fear of suffocating from excess mucus, it is unlikely to lead to death. Nevertheless the cause of excessive mucus that feels like it is responsible for choking still needs to be investigated. Excessive mucus can increase the risk of infections in the respiratory tract and even affect normal functioning in the area. 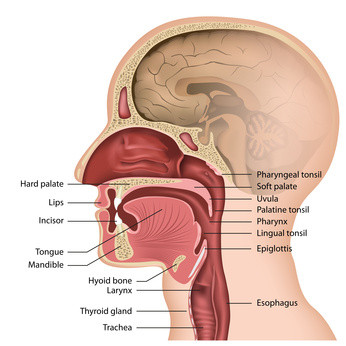 Mucus is produced by the small mucous-producing cells and glands that line the respiratory tract. These cells also line the digestive tract. When it comes to the airways the mucus moisturizes the lining which quickly dries due to the constant movement of air. It also traps dust and microbes. Tiny hair-like protrusions then push the mucus up and out of the airways into the mouth where it is spat out or swallowed. Some mucus may also drip out of the nose. Normally we do not realize that this mucus production, expulsion and swallowing is occurring.

When the mucus is excessive we may experience is as a runny nose, post-nasal drip or productive cough. Frequent swallowing is another way that the body may attempt to clear the air passages of the mucus. Sometimes the mucus does not arise from the respiratory tract. The lining of the digestive system can also produce mucus. In fact the mouth and even salivary glands also release mucus into the oral cavity. Excessive mucus arises when the saliva-producing cells or glands are overstimulated. This is most often related to inflammation.

Causes of Choking on Mucus

The cause is a result of excessive mucus production which may arise with a range of inflammatory conditions. Some conditions may be due to an infection while other can be associated with physical and chemical trauma.

These are two common viral infections where there is excessive mucus production in the air passages. Both a cold and flu are acute conditions that resolve on its own within a few days. There is no cure and treatment is not usually necessary beyond supportive measures. The symptoms like excessive mucus production can persist for several days or weeks after the main symptoms resolve. It may sometimes progress to secondary infections, usually bacterial, such as bronchitis or pneumonia.

Acute bronchitis is an infection of the bronchi that leads to the lung. It is a common complication following acute viral conditions like the flu and is more likely to affected people in poor health in these cases. Smokers are also more prone. However, any person can develop acute bronchitis. Most cases are due to bacterial infections and antibiotics are necessary. People with COPD (chronic obstructive pulmonary disease) will experience repeated acute infections as part of chronic bronchitis.

Pneumonia is inflammation of the lung tissue that occurs mostly with infections. It is often accompanied by infections in the bronchi (bronchitis). There are many different types of pneumonia and a range of causes. Some tend to present with more mucus than others. The problem in pneumonia is that the mucus tends to settle in the lungs. This further exacerbates the infection and can cause some difficulty in breathing which may be perceived as shortness of breath or the sensation of suffocating.

Asthma is a chronic airway condition where there is narrowing along with excess mucus production. It usually starts in early life and can continue throughout adulthood. Chest tightness, wheezing, difficulty breathing and coughing are the main symptoms that may occur as episodes. Apart from the  spasm of the bronchi, the excessive mucus also narrows the airways. Similar to pneumonia excessive mucus can collect in the lungs and impede gas exchange.

Chronic obstructive pulmonary disease (COPD) is mainly seen in long term tobacco smokers. There is extensive damage to the airways and lung tissue. Chronic bronchitis is one type of COPD, the other being emphysema. Excessive mucus production leading to a persistent productive cough is the main symptom in chronic bronchitis. There may be acute exacerbations with repeated infections. The mucus production can be excessive to the point that it lead to choking often when sleeping and causes a person to awake choking.

Some types of lung cancer can lead to excessive mucus production. The subsequent destruction of lung tissue also hampers normal breathing and a person may feel constantly short of breath and at times like they are suffocating. Often the mucus may be blood-stained in the later stages of the disease.

Pain is also prominent as the condition progresses. However, it is important to note that lung cancer can be largely asymptomatic for long periods of time. Generalized symptoms like weight loss and malaise may also be seen in infectious conditions like pulmonary TB (tuberculosis).

The rising acid in the esophagus can trigger excessive mucus production in gastroesophageal reflux disease (GERD). This may be further exacerbated by excessive saliva production (water brash) as the body attempts to neutralize the acid and flush it downwards. Sometimes acid reflux can be silent in that the typical heartburn is not present. Excessive mucus in the mouth and even choking on the mucus may be the only symptoms. Mucus production can also occur with other throat and esophageal conditions.