The tailbone (coccyx) is the terminal part of the vertebral column – the collection of bones (vertebrae) that surround the spinal cord. It is referred to as the tailbone because of its appearance and since in the adult it is just a remnant of the actual tail-like protrusion in early fetal life (caudal eminence). Unlike the rest of the spine, the coccyx and the lower half of the sacrum do not play any weight-bearing role when standing but weight is transmitted to these areas during sitting. The weight transferred to the coccyx increases with sitting backwards and decreases when sitting forwards. The coccyx is also an important site for the attachment of muscles, tendons and ligaments. The coccyx is made up of 3 to 5 bones – the uppermost of these (Co1) fuses with the sacrum (S5) while the remaining bones fuse together. These bones are small and underdeveloped when compared to other vertebrae. The coccyx articulates with the sacrum at the sacrococcygeal junction. However, the coccyx is almost immovable when compared to other parts of the spine.

Coccydynia is the medical term for pain in the coccyx (tailbone). It is used interchangeably with the term coccygodynia. The pain is associated with inflammation of the coccyx or neighboring parts for various reasons. Most cases of coccydynia are due to unknown causes (idiopathic).  The coccyx is fairly protected by the fat of the buttocks.. However, in certain cases the nature of the injury may be such to directly affect the coccyx and its joint with the sacrum. Pain can arise from the joint, the coccygeal vertebrae itself or the attachment of the muscles, tendons and ligaments at this site.

In most cases the cause of coccydynia is unknown (idiopathic) and it arises spontaneously. However, often this is due to a person forgetting the incident that may have precipitated inflammation.

An injury to the coccyx or the sacrococcygeal junction is the leading cause of coccydynia. It is most often due to a fall, a kick or injury to the buttock or pelvis. This may cause bruising of the coccyx, dislocation or in severe cases even a fracture. The latter, a broken coccyx, causes the most severe pain (coccydynia). Cyclists are more prone to coccydynia, particularly with long distance cycling. Childbirth may also cause an injury to the coccyx. The increased flexibility of the joint in the latter part of pregnancy makes it prone to dislocation or increases tension of the ligaments and tendons that attach to the coccyx. This is more likely to occur with prolonged labor.

Other causes may include : 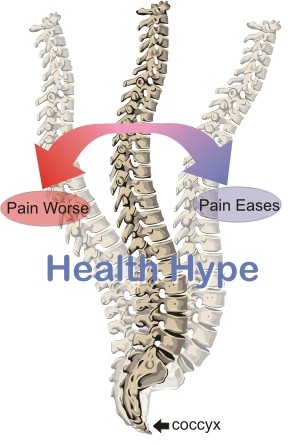 Coccydynia is a symptom and not a condition on its own. The pain is typically worse when sitting particularly on a hard surface or for a long period of time. It tends to ease with walking, standing and lying flat. Depending on the cause, there may be diffuse pain of the buttocks and pain extending up to the lower back. Other possible trigger factors for the pain include bowel movements and intercourse.

Generally the pain is felt in the intergluteal region (between the buttock “cheeks”). The severity of the pain, duration and sitting tolerance (period of time one can sit before the pain starts or becomes unbearable) must be taken into consideration when assessing the extent of the condition.

Many conditions can mimic coccydynia and the following symptoms may be an indication of another causative condition :

A thorough medical history may indicate key details which is indicative of coccydynia. Physical examination may reveal pain when pressure is applied on the coccyx which is located about 2.5 cm posterosuperiorly to the anus. An x-ray may be sufficient for a diagnosis but further investigation may require a CT scan, MRI or bone scan when indicated.

The causative condition, when identified, should be treated. The use of NSAIDs (non-steroidal anti-inflammatory drugs) and a seat cushion are helpful in most cases. Physical therapy may be necessary simultaneously particularly in long standing cases. However, if the symptoms do not resolve then other measures should be considered. Corticosteroid or anesthetic injection at the site should only be considered once there is thorough investigation and other causative conditions have been conclusively excluded. Surgery is the last resort and involves removal of the coccyx (coccygectomy). It is rarely done these days.