What is a cold injury?

A cold injury is any disruption of internal processes, damage or death to tissue and associated complications that results from exposure to cold. This includes cold weather, cold water, snow, ice and liquid gas. Although the body has various means to tolerate and cope with cold, minimize damage and regulate the internal temperature, there comes a point where this is insufficient. Cold injury is dependent on the temperature of the environment or substance and the duration of exposure. The injury may also be determined by clothing and other other protective gear that can play a role in minimizing the severity of the injury.

There are two ways of classifying cold injury. Firstly it is based on whether a part of the body or the entire body is affected. Secondly it is determined by the degree of cold exposure and whether the tissue fluids freeze or not.

Freezing and non-freezing injuries depend on whether the tissue fluid freezes or not. Severe and serious damage occurs when there is freezing. Ice crystals form outside the cells in the surrounding tissue fluid thereby dehydrating the cell. Fluid is the main medium in the body for all processes and once it freezes, exchange of nutrients, gases and other biochemical processes will cease. Tissue death is inevitable.

This type of cold injury arises with exposure to temperatures that do not cause freezing of the tissue fluids. It includes damp condition. The injury to the tissue is largely reversible. Blood vessels become inflamed and red raised lesions form on the skin. Sometimes blisters, erosions and ulcers may form on the skin surface. 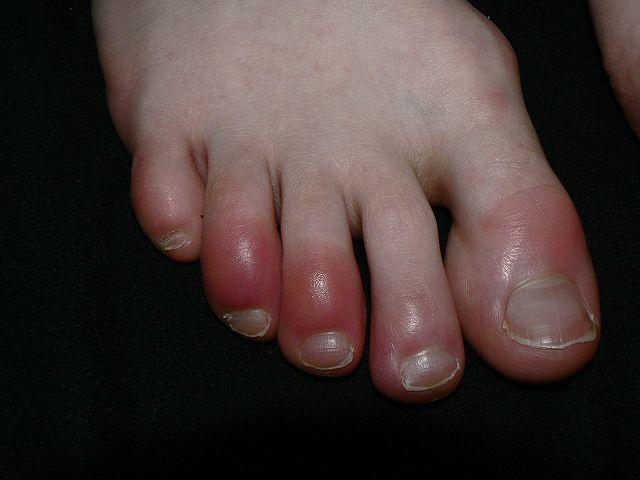 Picture of chillblain from Wikimedia Commons

Immersion foot, also known as trench foot, occurs with prolonged exposure to wet conditions although it is not freezing temperatures. The feet are most commonly affected and this condition was widely seen in the trench battles of World War I.  The heat loss may reduce the temperature to almost freezing point. Blood vessels and nerves are affected.

This type of cold injury is the mildest. It is seen as a prelude to frostbite. In frostnip the outer layers are affected and is also known as superficial frostbite. If there is intervention, then frostbite can be prevented.

This is the most severe type of cold injury. There are several effects that arise with this type of cold injury. The cold causes direct tissue damage, ice crystals also damages cells, dehydration of cells are seen with ice crystal formation, blood flow slows, blood clots form and there is ischemia (injury) with inadequate oxygen supply of the affected tissue. There are four stages of frostbite with the fourth being the most severe where tissue death occurs.

First and second degree frostbite are limited to the skin and subcutaneous tissue. Therefore it is also known as superficial frostbite. Third and fourth degree frostbite affects deeper tissue like the muscles, tendons, blood vessels and nerves. It is also referred to as deep frostbite. 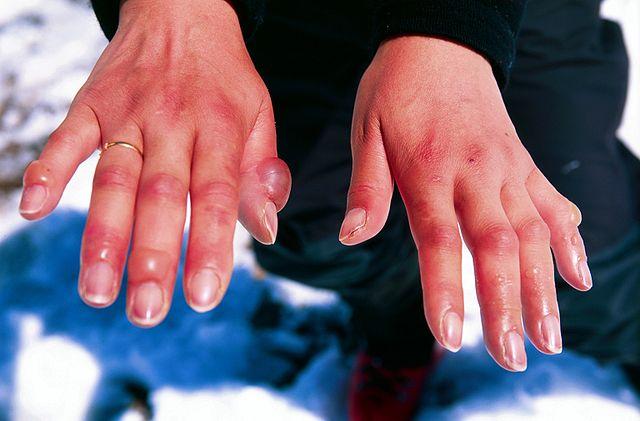 Picture of frostbite from Wikimedia Commons

Although the causes are largely the same for all types of cold injury, there may be slight variations in that certain causative factors are more likely to cause one cold injury rather than another. The temperature exposure and duration are other factors that need to be considered in the type of injury. However, in broad terms cold injury is due to exposure to or contact with :

There is a greater risk of cold injury with a lack of protective gear, inadequate thermal clothing and inappropriate shelter with insulation. There are also various physiological (non-disease changes in the body) and pathological (diseases) factors that also increase the risk of cold injury.

Cold injuries are a clinical diagnosis meaning that it is made based on the presence of signs and symptoms indicative of a cold injury with a recent history of cold exposure. The severity of the tissue damage is indicative of the temperature and duration of exposure. Further tests may not be necessary but can be helpful in identifying the extent of the injury and biochemical changes in the body as a consequence of cold exposure.

These investigations may include :

The goals of treatment for cold injuries include :

This is one of the single most important measures in treating and managing cold injury. Rewarming may require gentle heat and massage for non-freezing injuries while conditions like frostbite needs more controlled techniques. Warm water may be used to bathe the area thereby thawing the tissue in frostbite. Direct heat should never be applied to the skin as it can cause burns. Although warm water baths are widely used, whirlpool baths where the water is constantly circulating are preferable. This ensures that the water is maintained at a constant temperature. Passive or active rewarming may also be necessary if there is systemic hypothermia. This involves the use of thermal blankets to help the body temperature increase on its own (passive), or addition of heat to assist in restoring the body temperature (active).

Superficial frostbite may require between 15 to 30 minutes of rewarming whereas up to 1 hour of rewarming may be needed for deep frostbite. Insufficient rewarming is one of the main shortfalls in treating frostbite in the early stages. However, rewarming is not advised if there is a chance of re-exposure to cold and likelihood of frostbite recurring.  Massage of the affected area should be avoided in frostbite. Rewarming will lead to pain as inflammation arises and the nerve activity gradually restores. Ibuprofen, acetaminophen and aspirin are milder drugs that may help with pain management but in severe cases, opioid analgesics like morphine may be required.