Most parents would know that dizziness is one of the common complaints among teen girls along with fatigue, abdominal pains and headaches. Often these symptoms are temporary and the exact cause is not always identified. It is usually not a cause for concern if it does not lead to fainting and does not recur frequently. Dizziness can affect any person, of any age and gender. But there are some causes of dizziness that are more likely to occur in teen girls.

The possible causes of dizziness discussed below are not the only possibilities. Teen girls are just as prone to many of the same causes of dizziness as teen boys and young adults. If none of the conditions below are the cause of dizziness, further medical investigation is warranted. Dizziness is a symptom that is often accompanied by other symptoms like poor coordination, disturbances of vision and difficulty with cognitive functions. If persistent it can significantly impair a person’s quality of life, lead to poor academic performance and even result in serious injuries. 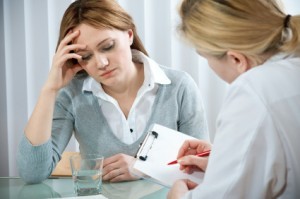 Apart from the causes below, it is also important to consider whether dizziness is due to psychological stress, social problems and depression especially among teen girls. For the odd incident, the following simple ways to relieve dizziness may be helpful.

Dizziness is a common and normal symptom of pregnancy. It affects most pregnant females at some point in the pregnancy. Some will experience dizziness for most of their pregnancy. It is mainly a result of two factors that occur in the pregnant body – the widening of the blood vessels to send more blood to the fetus leading to disturbances in normal circulation, and with low blood sugar levels that may arise with the increased nutritional demands not being met. Iron deficiency anemia is also a possible cause as discussed below.

The young body of a teen is often thought to be able to weather physiologic stresses better than older women. While this may be true in certain aspects, pregnancy can be an even greater strain on the body of a teen mother than it would in pregnant adults. Dizziness in pregnancy may be therefore more pronounced in teens. It can sometimes be among the first symptom to arise even before morning sickness. And it can also be worse among pregnant teens who are not fully aware of the changing demands of their body now that they are pregnant.

Eating disorders are more common among young females. Conditions like anorexia nervosa and bulimia nervosa are about 20 times more likely to occur in females than males. And the vast majority of these cases start in the teen years. The symptoms are not always obvious to friends and family. The typical picture of the very thin and emaciated anorexic is a feature that occurs later in the disease. It is therefore not surprising then that family members are sometimes not aware of an eating disorder for months and even years.

Complaints of persistent dizziness is one warning sign. The insufficient caloric intake means that the body does not have enough nutrition to maintain normal life processes. Instead it is operating on the bare minimum. The brain tissue is highly sensitive to low blood glucose levels which arises in eating disorders. Dizziness can arise within hours of not eating and can get progressively worse thereby culminating in fainting. Often there are also menstrual disturbances in post-pubertal females as a result of the eating disorder.

Iron deficiency anemia is one of the most common blood disorders in females of reproductive age. It arises with the loss of blood on a regular basis as a result of menstruation. It is further compounded by poor eating habits which may be more of a problem in the teen years when girls are concerned with their physical appearance. The shortage of iron ultimately causes lower than normal hemoglobin levels. This means that body’s oxygen-carrying capacity is reduce.

The brain tissue is highly sensitive to even minute fluctuations in the blood oxygen levels. Dizziness is a symptom of inadequate oxygen availability in the body. It may be constant in severe cases of iron-deficiency anemia but in milder cases it only becomes evident with physical exertion. Even relatively mild physical activity will lead to fatigue and dizziness. Iron-deficiency anemia is easily corrected with a combination of dietary change, supplementation and medication if the menstrual bleeding is excessive.

Most parents think that they are well equipped to spot the signs of drug misuse but it is not always clear cut. Teens not only have relatively easy access to illicit drugs, but they are also subjected to more peer pressure to use these substances. Along with it comes the ‘tutoring’ from peers on how to hide drug usage from parents and teachers. But it is not only illicit drugs that could be the problem. Alcohol, prescription medication and even strong adhesive glue or solvents may be some of the substances that are abused.

The psychoactive ingredients within these substances are able to act on the brain and cause a host of symptoms by disrupting normal brain activity. With the euphoria (‘high’) comes a host of other mental, emotional and physical effects. Dizziness is one common effect of most of these substances. There are usually also signs of slow reflexes, poor coordination and mental impairment apart from behavioral changes that are noticed over months or years. Often these behavioral changes are chalked down to being a teen but substance abuse could be the problem.

Postural orthostatic tachycardia syndrome, or POTS for short, is still not a well known condition among the general public but it is one possible cause of persistent dizziness among teens. There are widely varying incidence levels in different studies with some suggesting that it may occur in as many as 1 out of 5 teens. POTS should be considered as a possible cause of persistent/recurrent dizziness in teen girls when other conditions have been excluded.

In POTS, the heart rate increases to abnormally high levels when a person stands upright. Normally the heart rate does increase slightly in every person upon standing upright but in POTS this is almost twice as high. It is a result of the autonomic nervous system (involuntary control) failing to maintain proper blood supply to the brain. The body compensates by releasing adrenalin and the heart racing faster than would be expected. Dizziness is one of the symptoms that is prominent in POTS.