Sinusitis is the term for inflammation of the paranasal sinus. The inflamed sinus becomes congested with mucus as well as with pus in infectious cases of sinusitis. Inflammation of the nasal cavity (rhinitis) often precedes and exists along with sinusitis and it is therefore jointly referred to as rhinosinusitis.

How does sinusitis occur?

Sinusitis may occur through one of three mechanisms and are most likely due to a combination of factors.

Despite the different mechanisms, the underlying pathophysiology indicates a blockage of the paranasal sinus openings (ostia) which allows for mucus to accumulate in the sinuses. Infections, particularly secondary bacterial infections, tend to arise in these settings.

Sinusitis can be classified in several ways but the most common is by duration – acute, subacute or chronic. Acute sinusitis is where the inflammation and symptoms completely subside within 30 days. Subacute sinusitis lasts for 30 to 90 days and chronic sinusitis persists for more than 90 days (or 12 weeks). A further sub-classification is recurrent sinusitis which may involve multiple episodes of sinusitis that completely resolves only to recur within 10 days. Furthermore it may be classified by etiology (cause), pathogenic (microorganism) and location (anatomical). 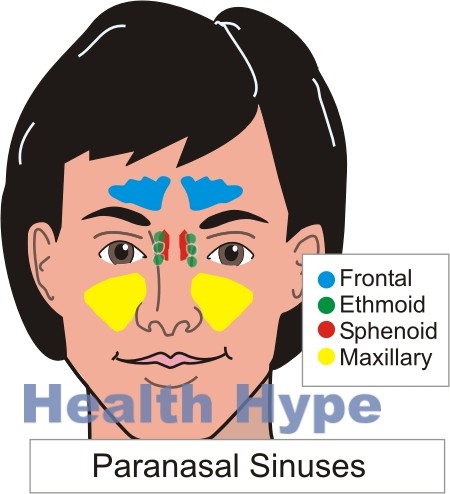 Allergic sinusitis is more frequently seen in patients with an allergic constitution (atopy). With allergic rhinitis, it may be throughout the year (perennial) or only exacerbate during certain periods (seasonal). Inhaled allergens such as dust, pollen and animal dander are common triggers. The condition is further exacerbated by secondary bacterial infections that may require acute treatment.

The presence of fungi within the paranasal sinus may also cause an allergic reaction. In these instances, the fungi do not invade and infect the sinus as is seen in immunocompromised patients.

Other causes often create conditions that eventually lead to a sinus infection. Most notable among these other causes is an obstruction caused by a nasal polyp, tumors, a deviated septum or following trauma where a fractured facial bone obstructs the opening of the sinus.

In addition, the following causes and risk factors may play a role in both acute and chronic sinusitis :

Signs and Symptoms of Sinusitis

The most prominent feature  is congestion of the sinuses which leads to similar symptoms in both acute and chronic cases. This includes :

Other symptoms may include :

Symptoms may be more specific for congestion of certain paranasal sinuses.