Coronary artery calcification is where calcium accumulates and hardens (mineralization) a portion of the coronary artery. It is not dissimilar from the way bones use calcium to become hard and strong. While calcification is necessary for healthy bones, the same does not apply to the arteries. These blood vessels are soft and elastic despite being relatively strong. These properties ensure that the artery can maintain its required function, irrespective of where it is located in the body.

The plaques seen in atherosclerosis are usually referred to as fatty plaques and associated with different types of fats in the blood. However, these plaques may also contain calcium. Once it hardens the plaque narrows. A heart scan can detect this calcification of the coronary artery even before there is any symptoms. It means that invasive procedures like an angiogram does not have to be done in every case to identify narrowing of the coronary artery.

The exact reason for and purpose of coronary artery calcification is not understood. It was thought of as being a passive process that occurred over a long period of time, especially since it is more commonly observed in elderly patients. However, this may not always be the case since it is sometimes observed in younger people with relatively early atherosclerotic lesions and does not affect arteries with no atherosclerosis. In this regard, the degree of calcification may be associated with more serious outcomes in younger adults than in the elderly. 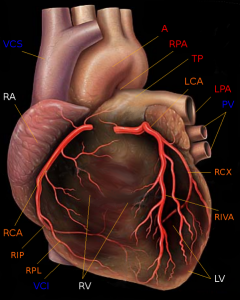 The differentiation between cardiac chest pain and non-cardiac chest pain needs to be made on a case by case basis. However, coronary artery disease should always be suspected in a person with high risk factors.

The preferred method for detecting coronary artery calcification is through the use of computed tomography (CT) scan. It is non-invasive when compared to a CT angiogram that requires the administration of dyes. It is highly sensitive and specific for calcium deposition and can also quantify the degree of calcification. However, CT scans do not preclude the need for a traditional angiogram especially in high risk and symptomatic patients.

The multislice or helical CT scan to detect coronary artery calcification, also known just as the heart scan, uses beams of electrons to create a 3D image of structures within the body. Not all structures can be detected with this technique but calcifications like bone tissue can be clearly visualized. Deposits of calcium appear as white spots and in the healthy coronary artery this should be absent whereas it would be expected in healthy bones.