Coughing during and after eating is not uncommon. It can occur in many different conditions, some of which are serious and others are not. There is always a risk of choking as food may enter the airways when a person inhales deeply to cough. This can lead to complications like aspiration pneumonia where the lung becomes inflamed as a result of food and digestive secretions.

Coughing is a sign of irritation in the airways. It is the body’s way of forcing out the irritant which may pose a threat to the airways and lungs. However, this response also occurs when our airways or lungs are inflamed, like from an infection. The cough helps to push out mucus but even without mucus, the cough (dry cough) will persist until the inflammation subsides.

Coughing when eating can also be a way for the body to protect itself. If food incorrectly enters the airways while eating, the body will try to push it out. This is a rare occurrence for most people. It may happen when eating too fast or talking while eating. However, for some people with an impaired swallow reflex, coughing with eating occurs at almost every meal.

Causes of Coughing After Eating

It is also important to take note of foods and beverages that may be irritants and will naturally trigger a cough. This is not a disorder or disease but a dietary factor. For example, many people find that a strong fizzy ginger drink will trigger coughing. Also take note of conditions where the swallowing reflex is impaired. This will inadvertently lead to coughing during and after eating.

Acid reflux is one of the more common causes of coughing after eating. The rising stomach acid may travel as high as the pharynx, causing local irritation and triggering the cough reflex. Heartburn and nausea are some of the other symptoms that are also present. Typically the irritation is eased with antacids or alkaline beverages like milk.

In chronic cases of acid reflux (gastroesophageal reflux disease or GERD), the recurrent irritation may lead to a condition known as LPR (laryngopharyngeal reflux disease). This can cause a hoarse voice with a sore throat that tends to be worse in the morning upon waking.

Food-related allergies may trigger inflammation of the respiratory tract. This may result in copious mucus secretion and is usually associated with the ingestion of specific foods, like dairy, wheat, nuts and egg yolk. In the upper respiratory tract, particularly the nasal cavity, rhinitis (runny nose), nasal congestion, sneezing or post nasal drip may be reported.

In the lower respiratory tract, mucus secretion and accumulation as well as airway hypersensitivity seen in conditions like asthma may also cause abnormal breathing sounds (typically wheezing) and dyspnea (shortness of breath). It is not uncommon for no other symptoms to be present apart from the coughing that arises or aggravates after eating.

Anaphylaxis related to hypersensitivity to certain foods, like shellfish, results in an acute reaction that can be life threatening. Coughing after eating may be one of the first symptoms.

Coughing after eating may be seen in tonsillopharyngitis (tonsils and/or throat) where the inflamed throat lining is further irritated by food or drinks. Tonsillitis and pharyngitis often arises as a result of an infection and this may involve the entire respiratory tract, particularly the upper portions. Typically a sore throat is reported and other signs and symptoms may also be present including a runny nose, sneezing, nasal congestion, hoarse voice and fever.

Non-infectious causes of tonsillitis, like chronic necrotic tonsillitis, may also trigger coughing after eating.In these cases, small food particles may also be trapped in the crevasses and patients may cough up specks of decomposed and compressed food particles, that often resembles small grains of rice..

Various causes of dysphagia (difficulty swallowing) may result in coughing during or after eating. Depending on the severity of the condition, patients may also complain of gagging when eating and regurgitation. This can include various muscular and nerve conditions that involve the act of swallowing. It can also occur with an obstruction in the throat. 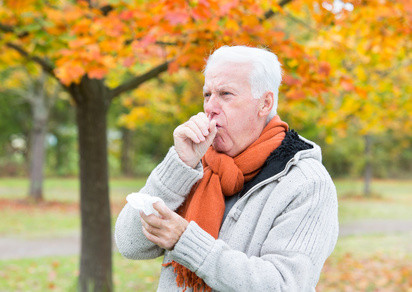 Coughing is therefore a consequence of choking in most of these case. It is more likely to be seen with conditions like:

How To Prevent Coughing When Eating