Tapeworms are well known for causing intestinal infections in humans. There are number of tapeworms, which may be acquired by eating different meats. It is particularly a problem when the meat is eaten raw or undercooked. The pork tapeworm remains as one of the more common parasitic worms to cause human intestinal infections. However, these is another condition where the immature form of this tapeworm can leave the intestines to lodge in other tissues and cause a more serious disease. One of the dangerous sites where it can spread to is the brain.

Cysticercosis is a condition where the larval cysts, an immature form of the tapeworm, migrates out of the intestine to lodge itself in other tissues, particularly the skeletal muscles and brain of humans. Due to the latter, it is often also commonly referred to as a brain tapeworm (neurocysticercosis). It is becoming an increasingly common condition in developed nations like the United States, particularly due to the influx of migrants from endemic regions. Yet many people are still unaware of this serious and potentially life-threatening condition.

Although the pork tapeworm (Taenia solium) is the main cause of cysticercosis, other tapeworms can also cause the disease. The brain and skeletal muscle (muscles under voluntary control) may be the most affected areas but it can develop in other tissues and organs. The eye, liver and tissue underneath the skin (subcutaneous tissue) are other possible sites. Most people will never know that they have this disease until it forms a large mass or affects vital organs and symptoms arise.

Difference between taeniasis and cysticercosis

Taeniasis is a well known condition. It occurs when the a person ingests undercooked meat and a tapeworm develops within the intestines of humans. Taeniasis is a different condition from cysticercosis. The pork tapeworm that causes taeniasis can also be responsible for cysticercosis. However, the latter condition (cysticercosis) is not caused by eating undercooked pork. It is a result of eating the eggs of the tapeworm in human feces. With taeniasis, humans do not consume the eggs but the larval cysts (cysticerci).

Normally pigs may consume the tapeworm eggs. The cysticerci then develop within the pig’s muscles and then humans eat the pork. In this way both the pig and human serve as hosts. With cysticercosis the pig is removed from the life cycle and humans serve as the intermediate hosts. Taeniasis does not usually become cysticercosis. However, living with a person who has taeniasis (intestinal tapeworm infection) can increase the risk of others developing cysticercosis. The same applies when a person with taeniasis handles food without following proper hygiene practices. 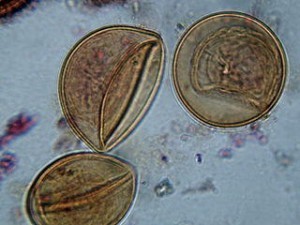 How does the tapeworm infect the brain?

Understanding the transmission and pathophysiology of cysticercosis is important in preventing the disease and identifying the early symptoms. It is equally important to understand the life cycle of the tapeworm and how cysticercosis arises in this regard.

There are two main ways in which humans become infected with cysticerci. First it is through eating raw fruit or vegetables that have been fertilized with human feces containing eggs. Water contaminated with human feces that is used to irrigate crops is also a risk. Second is through infected food handlers who do not practice proper hygiene when touching food. The eggs are sticky and adhere to the hands, particularly under the fingernails of tapeworm carriers. Through these route, even vegetarians can acquire cystcerci.

As a result there is little inflammation that occurs around the cysticerci. However, the parasite cannot maintain this immune disarming effect indefinitely. Over time the body’s immune system starts to respond against the degenerating cysticerci and this leads to inflammation in the brain tissue. At this point symptoms of cysticercosis become prominent. Eventually the inflammatory response encases the degenerating cysticerci in a granuloma. This may resolve, result in tissue scarring or become calcified.

Studies suggest that as much as 80% of neurocysticercosis cases are asymptomatic. The cysticerci are found during human post-mortems but the person never suffered with symptoms during life. The disease may develop around 3 to 5 years after initial infection but can be as delayed as three decades thereafter. Signs and symptoms of neurocysticercosis includes:

Not every person with neurocysticercosis will suffer with all of these symptoms. When the spinal cord is also affected then there are symptoms of radiculopathy (pinched nerve). There are usually no specific symptoms when the muscle is involved although lumps may sometimes appear which are tender to touch. Visual disturbances include blurry vision and double vision when the eye is involved.

Death can occur in severe cases that are left untreated.

It is important that cystericercosis is accurately diagnosed by a medical professional. This will guide treatment and also help to exclude other conditions that may be causing similar symptoms. Blood tests may indicate an infection but are usually non-specific. This means that it does not clearly indicate the cause of the infection. Imaging studies like MRI or CT scan are better options in order to visualize the granuloma or calcified lesions.

Cystericercosis does not always require treatment. Asymptomatic cases may not necessarily benefit from treatment with drugs to kill the parasite. However, when symptoms do arise then treatment is required. The treatment should focus on destroying the parasite and controlling symptoms. This is achieved with one or more of the following drugs:

Surgery may be required in some instances when patients are not responsive to medication. It may also be necessary for hydrocephalus (fluid accumulation in the brain).