The veins in the leg return oxygen-deficient blood laden with wastes back to the liver and heart for processing. There are two systems of veins in the lower leg – the superficial veins and the deep veins. The superficial veins lies just a short distance under the skin and empty into the deep veins. A common vein problem seen in the superficial veins is where it becomes enlarged – dilated (stretched) and tortuous (twisted) – known as varicose veins. The deep veins sit deeper in the leg covered by muscle and fascia. It carries the blood to the thigh which then travels to the trunk. A common and very serious problem that can arise in these deep veins is when a blood clot partially or completely blocks the vein. This can be dangerous if the clot dislodges from here and blocks an artery of the lung which can be fatal.

What is deep venous thrombosis?

Deep venous thrombosis (DVT) is when a blood clot forms in the deep vein of the legs. It can also occur in the arm but the focus is usually on the legs where a clot is more likely to form. It tends to arise in the calf of the lower leg or the thigh. DVT is more common in males than females especially after the age of 40. The serious complications, such as when the blood clot in the leg dislodges and blocks the artery in the lung (pulmonary embolism) is more commonly seen in the elderly after the age of 60 years. Milder complications can also be debilitating although not life threatening like a pulmonary embolism. 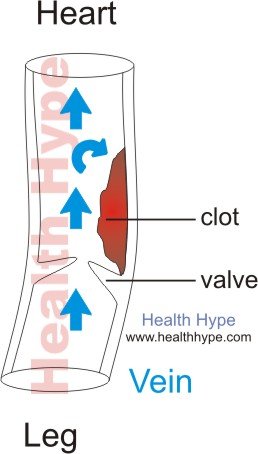 The leg veins have valves which ensures that the blood only flows in one direction – from the feet to the heart. Blood in the leg does not flow back to the heart as easily as it does elsewhere in the body largely due to the action of gravity, the distance from the heart and low blood pressure in the veins of the feet and legs. Muscles surrounding the leg veins act as a pump pushing the blood up these veins with every step and other leg movements. These valves prevent blood in each segment of the vein from flowing backwards.

Blood can start clotting for various reasons that may cause one or more of the following factors to arise :

These three factors are known as Virchow’s triad. In the normal state, the constant flow of blood, undamaged vein wall and the deactivated clotting factors does not trigger blood coagulation. It is important to remember that this process is normal and an effective mechanism to prevent blood loss in the event that a vein or artery is damaged. However, in deep vein thrombosis, the formation of a clot is abnormally triggered.

Should the cause persist, this clot can gradually grow in size. Initially it causes just a minor obstruction to blood flow and no symptoms arise. As time passes and the clot becomes larger, it may obstruct blood flow to a sufficient degree for symptoms to become evident. Although the veins are carrying oxygen-deficient blood laden with wastes away from the legs, if it is obstructed then it hampers the flow of oxygen and nutrient rich blood from reaching the legs. This sluggish circulation causes a condition known as post phlebitic syndrome.

However, the bigger cause of concern is when part of this clot in the leg vein breaks away, travels through the bloodstream and blocks the pulmonary artery of the lung. This condition is known as a pulmonary embolism and is a medical emergency because it is life threatening. It is more likely to arise when the blood clots occur in the larger leg veins like within the thigh compared to the smaller veins of the leg. The risk of a pulmonary embolism is greater in immobilized patients and the elderly.

Another danger is that of phlegmasia alba dolens (pale white leg) and phlegmasia cerulea dolens (blue leg) where the oxygen supply is impaired to such a degree that the tissue of the leg becomes damaged. Gangerene can subsequently develop in the affected part of the leg. However, this is an uncommon complication of deep vein thrombosis compared to post phlebitic syndrome or a pulmonary embolism.

The cause of deep vein thrombosis is the formation of clot in the leg veins. As explained above, it arises when the blood flow is slow and sluggish, the wall of the vein is damaged or the blood clotting factors are prematurely activated. There are certain risk factors that makes this more likely to occur although not every person with one or more of these risk factors will develop DVT. The risk factors are as follows :

Deep vein thrombosis does not always cause symptoms (asymptomatic) in the early stages. Even as the condition progresses and the symptoms become present, it is usually non-specific meaning that it does not clearly indicate that the problem is DVT. The signs and symptoms of deep venous thrombosis includes swelling, pain, changes in skin color and temperature. It is important to take note of the symptoms of pulmonary embolism as it is the most serious complication of deep venous thrombosis.

Swelling of the leg (peripheral edema) is a strong indicator of a leg vein clot although it may arise for various other causes. The entire leg is typically swollen including the foot and ankle. This swelling is usually one-sided (unilateral). If the clot is higher up in the veins which carry blood from both legs back to the heart then the swelling can be on both sides (bilateral). The swelling is a pitting edema that is worse in the affected leg.

Leg pain with DVT can occur in the entire length of the leg. It is typically described as a cramp or muscle strain. With palpation (firm touch), there is tenderness over the area of the leg veins, extending from the lower leg to the thigh. This does not however clearly isolate the site of the clot. Similarly the severity of the pain and tenderness is not an indication of the size of the clot or degree of obstruction. Tenderness is more commonly seen than leg pain with about only half of DVT cases actually experiencing pain.

Warmth of the skin and skin redness tends to occur over the site of the clot. It is not always present and these symptoms on its own can be an indication of other skin diseases. Paleness of the skin or even a bluish discoloration (cyanosis) may be evident along the entire length of the leg. Chronic venous insufficiency in the legs may eventually present with :

Picture of DVT in the right leg. Sourced from Wikimedia Commons.