There is an immediate assumption that a gynecological problem means that a woman cannot conceive or carry the pregnancy to full term. Polycystic ovarian syndrome (PCOS), endometriosis and uterine fibroids, particularly when it occurs in women during their reproductive years it is immediately associated with infertility. But this is not always the case. And the problem is not isolated to just conception and pregnancy challenges.

Often these conditions are thought to be one and the same, or largely similar. This is incorrect. There is some degree of overlap with the symptoms of each conditions. However, there are a number of gynecological conditions that can present with similar symptoms and it can be confusing to many women.

Education can significantly assist with the treatment and management process. And with incidence of PCOS, endometriosis and uterine fibroids rising these days, it is important that women understand what has gone ‘wrong’ in order to improve the compliance with treatment, and assist with long term management. 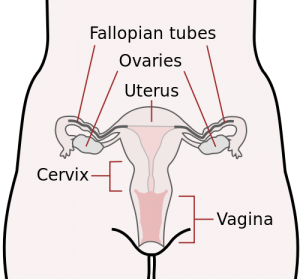 What are the main organs?

First and foremost it is important to understand the different organs that make up the female reproductive system. The visible part or external genitalia is the vulva. One of the openings is to the vagina, the long tube that leads to the uterus. Separating the uterus and vagina is the cervix. The uterus or womb is a muscular sac that has 3 layers – the endometrium (inner), myometrium and perimetrium (outer). The ovaries are located on either side of the uterus. It produces egg cells (ova) which are released during ovulation. The eggs cells travel from the ovary, through the fallopian tubes and into the uterus.

You may also want to read how to know when you are ovulating.

Where is the problem?

What is the problem?

The term polycystic ovarian syndrome infers multiple cysts in the ovaries. While this does often occurs, it is not the root cause of the problem. The problem seems to arise from a dysfunction in hormone regulation by the pituitary gland resulting in an excess of androgens (male sex hormones) along with insulin resistance. Read more on what is PCOS.

In endometriosis, the inner lining of the uterus (endometrium) develops elsewhere in the body outside of the uterus. It may occur on other pelvic organs (most common) or even on abdominal organs. This is abnormal. The tissue can bleed and breakdown as it normally would in the uterus and lead to a host of symptoms or cause adhesions on the affected organ. Read more on what is endometriosis.

With uterine fibroids, there is an abnormal growth of smooth muscle in the wall of the uterus. These growths are benign tumors that occur as a single large mass or many smaller masses. Although it is very rare, sometimes a fibroid can become malignant (cancerous). Hormones play a central role in the development of these growths. Read more on what are uterine fibroids.

Why does it occur?

The exact cause of polycystic ovarian syndrome (PCOS) is unknown. There is often a family history of the condition and it is also believed that it could be due to exposure to high levels of male hormones (androgens) in fetal life. The condition seems to be due to an interplay of multiple factors including excess of insulin, abnormal pituitary functioning and low-grade inflammation.

The exact cause of endometriosis is also not known. It is believed that the condition may arise with retrograde menstrual flow where the menstrual blood flows backwards and leaks out of the fallopian tubes into the pelvic cavity. The endometrial cells are then carried along. It could also occur after surgery to the pelvic area. There is also a possibility that the endometrial cells travel through blood vessels or lymphatic vessels out of the uterus.

As with PCOS and endometriosis, the exact cause of uterine fibroids is unknown. Some factor may cause genetic changes in the muscle cells leading to abnormal growth which is typical of any tumor, benign or malignant. There is also a hormone link in that some of these cells may respond more strongly to the hormones, estrogen and progesterone. Or there could be higher levels of these hormones present.

What are the symptoms?

There is a large degree of overlap when it comes to the signs and symptoms of these three conditions. Abnormalities in menstrual cycle and menstruation, as well as pelvic pain is seen in all these conditions although there may be individual variations. The periods may be too long, short or absent. The blood flow may be abnormally heavy or scanty. There may be period pain (dysmenorrhea) or pelvic pain throughout the cycle which often worsens during menstruation.

Does it affect conception?

All three conditions – PCOS, endometriosis and uterine fibroids – can affect conception and pregnancy in women. It is less likely to occur with uterine fibroids. In fact these conditions are often diagnosed when women fail to conceive and seek medical attention for infertility, despite having symptoms for years. Both PCOS and endometriosis remain some of the major contributing factors to female infertility.

However, women may still be able to conceive despite having these conditions. It should not be immediately seen as an insurmountable obstacle to fall pregnant and carry a baby throughout pregnancy. Advances in medical treatment has made it possible for women to conceive, or consider alternatives to natural conception in the face of these gynecological challenges.