Emphysema is the abnormal enlargement of the airspaces in the lungs with destruction of the walls of the air sacs. It is accompanied by a loss of elasticity of the airways which then collapse during expiration. Pulmonary emphysema literally means excess air in the lungs since the air that is inspired (inhaled) cannot exit as easily and is therefore ‘trapped’ with the lung. It is an irreversible lung disease and almost always seen with prolonged cigarette smoking.

Emphysema is a chronic obstructive pulmonary disease (COPD) like chronic bronchitis. With emphysema the damage is at the level of the alveoli (air savs) of the lung whereas with chronic bronchitis, it is the bronchi (airways) that are involved. Nevertheless both conditions have many overlapping features and are related to small airway disease (chronic bronchiolitis).

How does emphysema occur?

The pathogenesis of emphysema is fairly complicated and there is more than one hypothesis to explain the process. It is characterized by chronic inflammation associated with ongoing oxidative stress and protease production. Structural changes like hypertrophy of the bronchial smooth muscle and goblet cell metaplasia also play a part in the disease process.

Cigarette smoking or other forms of constant smoke inhalation leads to persistent irritation of the bronchi and bronchioles. This also predisposes the airways to repeated infections. This chronic inflammatory process disrupts the normal mechanisms that protect the airways.

All of this contributes to destruction of the airway lining and a loss of elasticity over time. Air enters the narrowed airways with great difficulty. During expiration the airways collapse and the air remains trapped within the lung. This leads to a persistent stretching of the lungs which damages the walls of the air sacs (alveoli) over time. 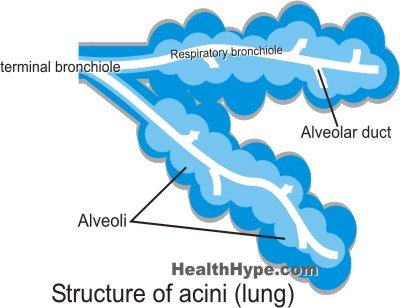 Loss of the alveolar walls and a concomitant decrease in pulmonary vascularization means that gas exchange between the blood and air in the lung is decreased. This leads to pulmonary hypertension thereby straining the right side of the heart and eventually leading to right-sided heart failure.

The clinical presentation of emphysema may vary with early stages being almost asymptomatic and late stages characterized by severe dyspnea even at rest. The symptoms of emphysema only become evident once about one-third of lung parenchyma is damaged. It may however be preceded by bouts of coughing associated with excessive mucus in the airways as discussed under chronic bronchitis symptoms. This is due to small-airway disease (chronic bronchiolitis).

The typical presentation of an emphysema patient is the thin, barrel-chest and breathless patient, who sits forward in a hunched manner ad breathes through pursed lips. Well oxygenated emphysema patients are also referred to as the ‘pink puffer’ phenotype which is more evident in emphysema-predominant COPD compared the ‘blue bloater’ presentation seen with chronic bronchitis COPD patients. However, cyanosis may be evident in the late stages of the disease, so the ‘pink puffer, blue bloater’ presentation cannot be conclusively associated with specific forms of COPD.

Other types of lung disease should also be excluded as the signs and symptoms of emphysema, especially in the early stages, are non-specific.

There are three types of emphysema, centriacinar, panacinar and paraseptal, which are named according to its anatomical distribution in the lobule of the lung. A fourth type, known as irregular emphysema, is sometimes excluded because it is asymptomatic and therefore clinically insignificant. It is important to first understand the normal lung anatomy involving the terminal bronchioles and alveoli in order to better understand the distribution of emphysema. 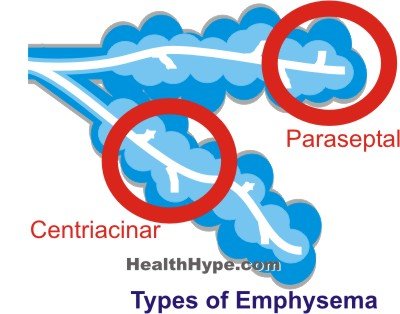 This is also known as centrilobular emphysema because the central parts of the acini are affected which lie more proximal, closer to the terminal bronchioles. The distal alveoli are usually unaffected. Centriacinar emphysema is the more common type of emphysema frequently seen in long-term smokers. It is often associated with chronic bronchitis as the inflammation may extend from bronchi all the way to the alveoli. Usually the upper half of the lungs are affected.

This type of emphysema is also known as distal acinar emphysema because the alveoli around the proximal parts of the respiratory bronchioles are unaffected. Most of the damage is around the distal alveoli, aveolar ducts and septa. The enlarged alveoli form cyst-like bullae, which may compress surrounding tissue. There is almost no airway obstruction and may be clinically insignificant until complications arise. It is one of the more common causes of a spontaneous pneumothorax among young adults.

In this type of emphysema, there may be widespread damage although the distribution is irregular. Fibrosis of the lung tissue may be observed and usually it does not cause any symptoms. Irregular emphysema may have been associated with the other types of emphysema initially, which was localized and healing occurred thereby preventing the progression of the disease in that area. It is clinically insignificant and therefore not often considered among the other types of emphysema.

The first symptoms are similar to chronic bronchitis, although this may not be present in every case. Often the most prominent of the early symptoms reported by patients is breathlessness (dyspnea). This is mainly upon exertion and other causes of chronic exertional dyspnea, like those associated with cardiac conditions, needs to also be excluded. The dyspnea gradually worsens as the disease progresses.

As most cases of emphysema are associated with tobacco smoking, a long history of smoking accompanied by recurrent or persistent breathless should always raise the concern of emphysema. In the early stages, the symptoms are non-specific and only becomes more disease specific as the condition worsens.

After the early stages, patients will report other symptoms associated with breathlessness and clinical signs become more prominent. Rapid breathing, prolonged expiration (exhaling) and wheezing may evident although abnormal breathing sounds could be absent. Crackles may be heard during acute infections.

Persistent dyspnea is usually present by the late stages and an expiratory wheeze may be clearly audible. Hyperinflation may contribute to a barrel chest and the accessory respiratory muscles are used for breathing even at rest. Coughing is slight and mucus scanty which is opposite to chronic bronchitis.

Clubbing of the fingers is rare in emphysema and if present, there should be further investigation for conditions such as lung cancer. Weight loss, although common and very prominent in an emphysema patient, should also warrant the need for investigations to exclude lung cancer. Hypoxia (low blood oxygen levels) and hypercapnia (high carbon dioxide levels) may be detected upon conducting an arterial blood gas although this may not be evident in a well oxygenated patient.

Death in emphysema is due to right-sided heart failure, massive collapse of the lungs or respiratory acidosis and coma. The signs and symptoms of these conditions may therefore overlap with the typical symptoms of emphysema, especially in the final stages.