Hormones are the chemical messengers that are transported throughout the body. It helps to coordinate and regulate various processes. These chemicals are produced and secreted by glands. Collectively these glands and hormones comprise the endocrine system. It is prone to various diseases that may directly or indirectly affect the gland.

These are some of the endocrine glands located throughout the body. It is important to not that endocrine glands secrete hormones directly into the bloodstream. It should not be confused with exocrine glands that release secretions, like enzymes, into a body cavity.

For example, the salivary glands are exocrine glands. The pancreas both an endocrine and exocrine component. In terms of its exocrine functions, it releases digestive enzymes into the small intestine. As part of its endocrine function it secretes hormones like insulin into the bloodstream.

The signs and symptoms of endocrine diseases do not usually occur in the area of the gland. This is due to the fact that the hormones secreted by these glands can travel via the bloodstream and may have the most pronounced effect elsewhere on or in the body. 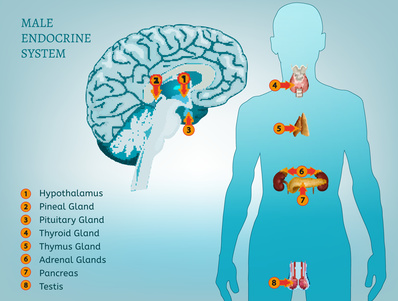 When the endocrine glands malfunction or there is some disturbance in the hormone levels then many different signs or symptoms may arise. Some of these signs and symptoms are specific to the gland and hormone that is affected. For example, thick facial hair growth in women may be a sign of high testosterone levels.

Other signs and symptoms may not be as specific. These symptoms are generalized and may occur in many different endocrine diseases. It is therefore difficult to isolate it to a specific gland and diagnose the type of endocrine disease solely by the symptoms. For example, weight gain may be seen in hypothyroidism (underactive thyroid)ad Cushing’s syndrome (adrenal gland dysfunction).

Unintentional weight loss can occur for various reasons. If it arises without a change in diet or in the backdrop of eating disorders, then it has to be investigated further. Apart from various diseases including the endocrine diseases listed below, it can also occur with cancers.

In both men and women, dysfunction with the gonads (ovaries in women, testes in men), pituitary dysfunction FSH/LH), thyroid dysfunction and diabetes mellitus are some of the more common endocrine disorders that affect fertility. However, a dysfunction of almost any endocrine gland or its hormone can impact on fertility.